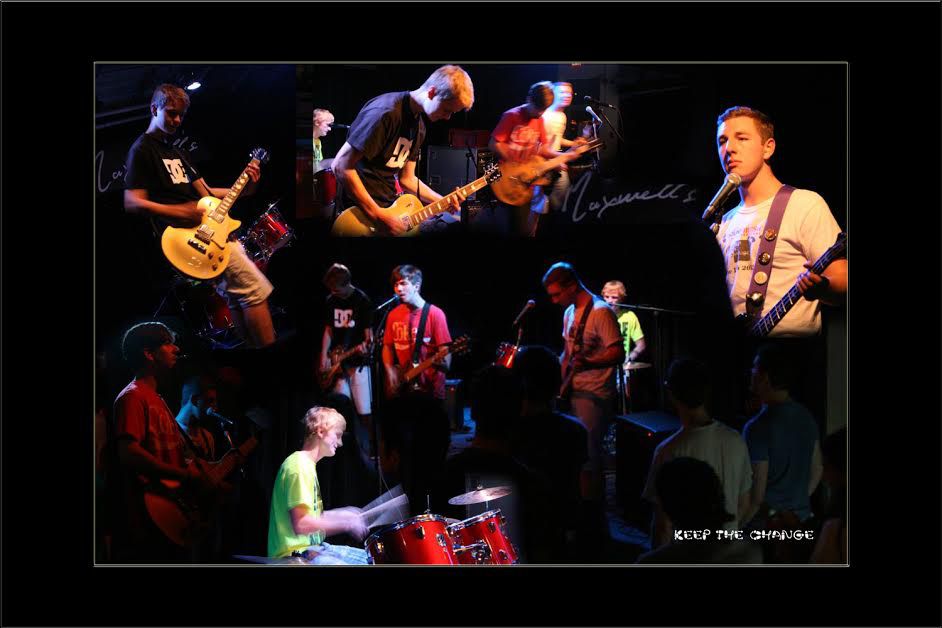 Keep the Change plays a blend of pop punk, rock and indie. Coming from all over Ontario, in places that include Bayfield, Burlington and Kitchener, they have been working their way up in the music scene.  Jake Dunning is the lead vocalist but he’s not limited to that. He also plays the rhythm guitar and piano. Matt Burt is on lead guitar but also can play the flute. Nick Burt is on drums and also a backing vocalist. Zack McVannel is the bassist and sings backing vocals as well.

Where did you come up with the name for the band?

KTC: So there are a lot of stories out there, but for real we got it from Mark, a Janitor at the movies.  He picked up a penny off the floor put it on one of our shoulders, he pretended to shoot if off while saying Keep the Change and we happened to have just come from jamming so we had band on the mind and the name was taken.  Apparently it comes from a line in the Great Canadian Horror Movie Hobo With a Shotgun, but I’ve never seen it so not really sure.

What was it like to hear your own song on the radio for the first time?

KTC: Awesome! It was a really cool feeling knowing that not just close fans have heard the song but people from all over heard.

Keep the Change have decided to raise money for the homeless through the sales of their single “Homeless” through iTunes.

What made you decide to do the fundraising?

KTC: We thought that it was a good idea considering it was a little different from what other bands do and it was also a good cause, why not? Win win situation

Was the point of the band always about raising money?

KTC:  No, the whole point of the band was not to just raise money; it was an exciting hobby for all of us that turned into starting a band for fun. After we recorded the song Homeless we decided that  incorporating raising money for the homeless was a good fit for that specific song.

Has the fundraising been successful? Is there anything else you would like to add about it?

KTC: Yes, in the beginning the sales from itunes did well but we feel that we have done a very good job raising money each year as well as food donations from our annual donations at the door fundraiser that we hold at the Black Swan in Burlington.  It gets bigger every year and we have made some great friends in the bands we have had come and play with us.

They recorded their EP, Penny For Your Thoughts, when Jake was 14.

What was it like starting off at such a young age?

KTC: Since we were so young, we just played around and had fun, this allowed us to gain a lot of experience from ourselves and looking at other bands as role models

What is Keep the Change up to now?

KTC: We want to get back in the studio to do some professional recordings of our new tunes but we have to sell more t-shirts to get there. We continue to write and are looking forward to this summer hoping to play a few festivals and shows around Ontario.  Oh yeah and Matt’s Flute! He started bringing it out busking ,  it was so awesome we have started incorporating it into our shows.

Zack and Nick have started their own band of a different style.

KTC: We all do a little extra on the side.  Nick has been writing and he and Zack have recorded a few tracks under the name Adastra which you can find on Youtube https://www.youtube.com/user/ThisIsAdastra  it is acoustic in the vein of NeverShoutNever!

Matt is very active in music at school you can only see it if you friend him on facebook though.

I have done some stuff on my own, as well as with friends from school.  You can check it out on Youtube here:  http://youtu.be/VfKsclzAcbk  and here: http://youtu.be/jbFwQX9OQSc

What made you decide to make your own music?

KTC: Fate, really it just happened. I started banging on the piano at an early age after I moved to London from Vancouver, (Thanks Mrs. Leavey) and it just continued from there. Started Jamming with the Burt’s at the cottage, taught myself some guitar and then the lyrics just followed.

We like to add some fun questions for the fans to get to know you better.

What are some of your Canadian influences?

KTC: Canadian? Well let’s see Hey Rosetta, Said the Whale,  Hollerado,  The Arkells,  The Archers, The Maysides, The Gentleman Thieves (just put out an awesome vid), Billy Talent , Hedley , Blue Rodeo  and Juice just to name a few, we are an Indie/Pop/Punk/Alternative/Ska/Rock band from Southern Ontario  so our influences run the gamut and change all the time.

KTC: Although we know most people don’t use Facebook much anymore it is where we post most of what is happening and we have it tied it into twitter account so our posts all go up on twitter as well. We also use instagram (instagram.com/keepthechange2010) tumblr (keepthechange2010.tumblr.com/) and Reverbnation personally I use SnapChat the most.

What do you find yourself doing when you’re not working on music or touring?

If you could tour with anyone who would it be?

If you were asked to play a song on the spot, which one would you choose to play?

KTC: Honestly? Right Now? It would be our new tune Hello?

Describe the personality of the band in three words.

KTC: Unique, Childish (in a good way), and Giddy. More than three words I know.

KTC: Sure we have an all ages show this weekend on April 6th in Kitchener at the L-Lounge that we are really stoked about.  There is going to be a lot of talent there. Probably one the best line ups we have played with to date. Which says a lot cause we have played with some amazing bands in the past, including  the Cardinals.  We are also entered in this year’s CBC Searchlight competition and would love any support we can get. Last year we finished in the top 15 in Hamilton and are hoping to better that.  We know it will be a tough go though  as we entered a live recording of our new tune Hello? We hope that fans can see the Diamond in the rough.  Bet if you listen to it three times in a row you can’t help but sing along.

Tickets to the show: http://www.ticketscene.ca/events/10217/