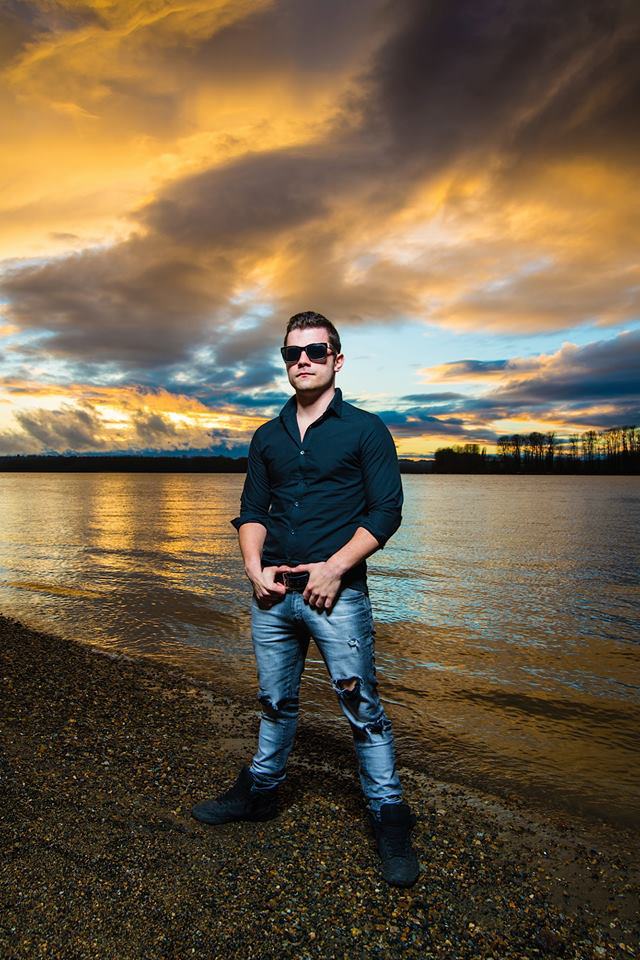 Jordan Pritchett, who also goes by his nickname JP, is the lead guitarist in BC band, Faber Drive. His flawless guitar playing in concerts paired with his voice always has his fans singing along and longing for more. He also plays lead guitar in Chris Buck Band, also based in BC. Keeping up with his busy schedule, JP has also decided that he wants to venture into the path of solo music.

Want to find out more about JP? Well so do we! A couple of the Canadian Beats writers had a few questions for him. So be sure to follow him on social media to see what he’s up to and keep reading this interview we were fortunate enough to have with him!

Canadian Beats is all about Canadian music, who is your favourite Canadian band/artist?

JP: There are way too many to choose from! There have been so many amazing bands and artists from Canada in all different genres! But the one with the biggest influence on my music career and my life in general, I guess would have to be my dad, Aaron Pritchett! He’s had many influential albums and songs and has been an amazing artist as well as father for me to look up to my whole life!

What was the first song you ever sang in front of others?

JP: It took me a minute to think of it, but I’d have to go way back to when I was around 8 years old. I had an obsession with starting up “boy bands” (this was in 98′ when Backstreet Boys and ‘N Sync ruled the world!) I had several singing “boy (and girl) bands” with cousins and friends. Had many songs!

Some of the titles were “Lovers from Texas”, “Heart Attack”, “Blood Thirsty Pirates”, “One Kiss or Two”, “Sweet Casandra”, and many more! haha!

Do you find social networking is an important tool in the music industry these days?

JP: Absolutely. It opens doors that anyone can take advantage of by just getting their work on the internet. We’ve definitely seen the effect it’s had on the music industry since day one, with new artists being discovered (perfect example: little Bieber) and fans getting a more personal experience with the artists they love.

What genre of music do you plan on pursuing with your solo work?

JP: I want to start with a mix of Rock and Country, but I definitely don’t want to stay within any “boundaries” with my own music throughout my career. I’m influenced my many genres of music, very much including pop, metal, rap and other kinds.

I’m sure your fans in Faber Drive are wondering with you branching off into a solo career, are you still going to remain with Faber Drive? Do you see yourself ever leaving?

JP: I plan to stay with Faber Drive for as long as I can! I’ve dreamt of my own solo career long before joining them, but I’ve been lucky to get the opportunity to be a part of Faber Drive for over 5 years now! It’s always been such an amazing experience and I wouldn’t give it up that easy! I just want to get an early start on my career and see where it can lead to in the next few years.

What made you decide to pursue a solo career?

JP: It’s always been my plan and my dream. Ever since my dad gave me my first guitar for christmas when I was 11, I knew that this was something I wanted to do for the rest of my life.

I found out I could sing (without nervously joking around) when I was around 15 and started singing in my first full band with my best friend and teammate/challenger in music, Danny Braaten. We went through many names but we eventually settled on “Roswell”.

You cover your father’s (Aaron Pritchett) song “Hold My Beer” at a lot of concerts, the first time you performed it were you nervous at all for his reaction?

JP: Definitely! I didn’t wanna butcher it! ..(But also didn’t wanna do it better than him.. hahah!) But luckily I’ve gotten to perform it on stage with him a few times even before joining Faber Drive. One was even on his tour with Toby Keith! I was definitely nervous in front of about 13,000 people!!

What inspired you to start playing music?

JP: My dad, first and foremost. Growing up with him being such an amazing performer and entertainer in general has really been an influence. My mom also has a very musical family. I’ve got a lot of memories as a very young child on long drives listening to Shania Twain or Garth Brooks mostly. I didn’t realize how much those two artists have influenced me until recently. It has to be some of the best country music of all time. But, also, my best friend Danny, who I mentioned before, has been a big inspiration to me since I started playing guitar. I had just met him then when I had moved and started at a new school, where my new grade 6 teacher taught guitar. He was in that class and had been playing for a few years already, so I think he was a big influence on me being in music. We’ve always pushed each other to get better and always had fun with it.

What is something your fans might not know about you?

JP: I love golfing! I’ve loved it since I was 13 and back when I was about 15 years old, I was going around 3 times a week on average in the summer.

AND! I started playing drums for fun, and it’s become a bit more serious now since practicing lots with Danny Braaten’s band, Lou Danger and the Thrills. As well as I’ve always loved to “produce”, and although I’m not that good yet, I’ve gotten better and have learned on my own! I have been producing new songs for him as well!

JP: Probably a lot of Metallica songs.. Really hard to pick any favourites off of their first 5 albums!

Where in the world would you like to tour the most that you haven’t yet?

JP: I would love to visit the Philippines! Faber Drive has a massive following there and we haven’t gotten to go over there to play a show yet!

JP: Probably when Faber Drive played Brome Fair in Quebec. It was such a fun time! Some fans threw up some hats, necklaces, etc. and for fun, we’ll wear the stuff thrown up on stage. Then I see a bra lying on the stage! So I picked it up and put that on too! haha I used it as my profile picture on Facebook a few years back!

JP: I’ve seen a few amazing concerts! On Faber Drive’s cross Canada tour last winter, we managed to get in to see Journey in Winnipeg! That show was so amazing, and very inspiring for a musician to want to get better. But, it’s also hard to compare to the two times I’ve seen Metallica! Last time being for $5 at Rogers Arena in Vancouver because they were finishing the filming for their 3D live DVD. It was so personal, like a 4 hour sound check. Definitely a musicians dream to see them in a setting like that!

JP: I really enjoy both. I would definitely choose larger arenas out of the two. I’ve found that the less people I play to, the MORE nervous I am! Much more personal.

JP: Golf is one, but even more so, the fact that I can watch golf. Oh, and Backstreet Boys.

JP: I’m so excited to be starting a solo career and I really hope you all enjoy the music I will put out in the future! I’m so lucky to have fans already going into a solo career. I wanna thank all you who have supported me and the bands I’ve been in, some since the beginning! Hope there’ll be many more to come and can’t wait to be playing for them on stage!