By Jordyn Armstrong on April 8, 2014@jordynhannah95 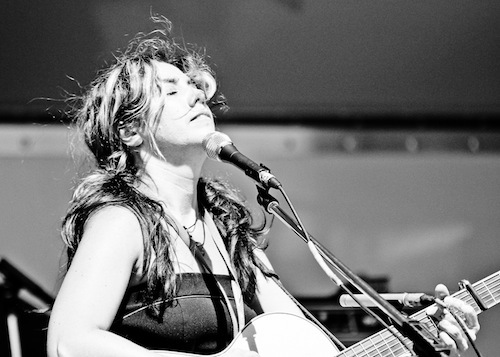 Canadian singer-songwriter, Cara Luft has been making her voice known all over the world. She recently toured in Europe and the UK in 2013. She will be soon hitting the road playing dates in both the US and Canada, as well as working on her new album.  If you are interested in seeing Cara live, be sure to check out these tour dates:

CL: Quite young.  My parents were folk musicians so I grew up listening to that style of music.  They’d cart my sister and I off to the various concerts and festivals they were playing at.  I remember meeting Stan Rogers when I was around 6, and already knew back then that I loved folk music.

What inspires you to write the music you do?

CL:  My own life experience is always a good inspiration for song writing.  We always grow as writers, and I’m learning to take other people’s experiences and stories and turn them into songwriting ideas.  It’s been a difficult but good learning process, attempting to step outside oneself and see things through someone else’s lens.

What are some of your favourite things about being in the music industry?

CL: Community is a big thing for me, and it’s one of the reasons I love touring so much.  I get to see people who I care about and love on a more regular basis.  I also get to develop relationships with people all over the world, people who I may not have had a chance to meet if I wasn’t in the music industry.

Your newest album, Darlingford (2012), has become very well known across the country. What has been some of the top successes from that album?

CL: I think the biggest success happened before the album officially came out.  I had such a successful crowd-funding campaign that I more than doubled my fundraising goal.  People all across the globe hopped on board to support the album, and it meant the album was a success before it was even finished.  When it finally came out the reviews started coming in from around the world, and they were incredible.  It was the most played Canadian folk album in the summer of 2013 on the International Folk DJ list, and several of the songs were shortlisted in two songwriting competitions: the International Songwriting competition and the Unsigned Only competition.

When you wrote Darlingford, did you expect it to go this big?

CL: You never know what to expect when you write material for an album.  I set out to write songs that were able to straddle that very fine line between the personal and the universal, songs that resonated with both my heart and the listeners’ hearts.  All I knew is that I wanted people to hear the songs and feel a connection.

Does your sound off the new album reflect the sound of this one?

CL: The new album, which I’ll be recording in June 2014, is going to be a bit different in that it will be focused on two-part vocal harmony.  It’ll still have great guitar and banjo work and the songs will be strong and inviting, but we’ll be recording a lot of it live off the floor so it will have a bit more of a raw energy about it.  It’s a recording style I haven’t done much of (live off the floor, singing at the same time as my musical partner), and I’m really excited about it.  We’ll also be recording to tape which will be a treat!

Your touring started April 4th in North Dakota and is continuing into Canada. What places are you most excited to visit?

CL: I’m excited about all the shows.  There are quite a few venues on the tour where I’ve never played and that’s always exciting (Fargo, Chicago, London, Hamilton, K/W).  I’m also returning to play at Hugh’s Room in Toronto, and I think the last time I played there was 2007!  I’m really excited about that show!

Are there going to be any more dates added? Is there anywhere you wish you could add?

CL: I think there is going to be a show added in Pittsburgh (after the Ontario dates).  There are always places I wish I could add on a tour, so I’m hoping the next time I’m in the Mid-West and in Ontario I’ll be able to visit those communities.

What can we expect from your new album?

CL: This upcoming new record is a collaboration between myself and another Winnipeg-based artist named JD Edwards.  I’ve been longing to do a duo project with a guy for quite a long time now, so this is just really exciting for both of us.  We’re co-writing together and having a blast arranging our material.  Neil Osborne (from 54-40) will be producing and I’m so looking forward to working with him again (he produced my 2007 album The Light Fantastic).

Do you have an approximate release date for it?

The next few questions are just a batch of fun get-to-know-you ones.

Who would you love to collaborate with if given the chance?

What song do you have stuck in your head most often?

CL: Lately it’s been “Ramble On” by Led Zeppelin.

What is your favourite thing to wear?

Is there anything  else you would like to add or say to your fans?

CL: Thank you for making my career possible!  Fans and supporters are the greatest gift a musician like me can have.