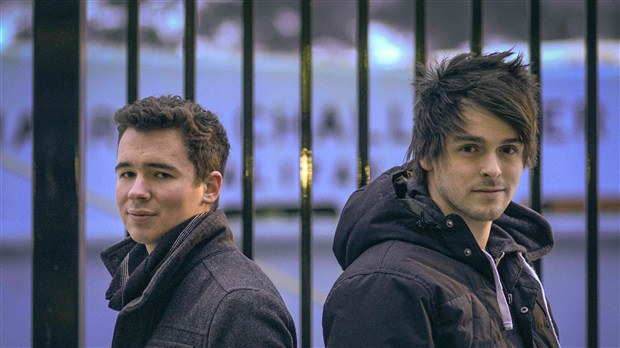 Jon Pike and Gordon Huxter are back making music together with their new project, Everglow. They just released their first song, Outside Looking In, to the CBC Searchlight contest. We caught up with Jon and to ask him a few questions about this new project.

The two of your were in a band together before, Wading For Mark. What’s it like to be working on music together again?

It’s so much fun! Gordon and I grew up together and we both kind of taught and learned from each other as teenagers when we were starting out with music. Even after we stopped doing Wading for Mark we have always been in close contact with our musical endeavours, and when Gordon moved to St. John’s I was really stoked to start working on stuff with him again.

You’re part of CBC’s Searchlight competition. What made you decide to enter your first song as Everglow into a national competition?

To be honest we really had no idea how to release stuff hahah. Since around August last year we’ve been writing and recording all the time, and so we’ve had this catalog of songs just kind of sitting around with no idea what to do with them. Where it’s just the two of us we didn’t really think we could play shows or do what traditional bands do. Finally we saw the searchlight contest we figured we’d just go for it and see where it goes!

Do you have any expectations for this contest?

We’d really like to do well at the regional level, though as we’re such new comers we don’t really expect to win. Most of all we just kinda wanted to get a feel for what people thought of the tune, get our name out a bit and see what opportunities we can get from the exposure of the contest.

You both worked on other projects between Wading For Mark and Everglow. Did you bring any influence into the new music from those projects?

Speaking for myself, I’ve grown and changed so much in music between Wading for Mark and now. I was in a band called Discos Down for a while, and after I had a short time singing and writing for RocketRocketShip. I don’t know if I necessarily  took any influences from the projects in particular, but all the music I was exposed to and all the different kinds of music I tried to write definitely has helped me grow into a much more dynamic writer and performer I think.

Are there any plans for more releases?

Plans – not currently! Songs – so many hahaha. Like I said, we really have no idea as to the best way to get our music out. But hopefully we’ll find a way (youtube maybe?) as we’ve gotten a really good response and we’d love to keep playing for people.

Locally I’ve really been a big fan of Make Mean Everything, Repartee, Chris Kirby, Ian Foster, and the S.S. Scotsman

You can hear and vote for Outside Looking In on the CBC website by clicking here: http://music.cbc.ca/#/artists/Everglow