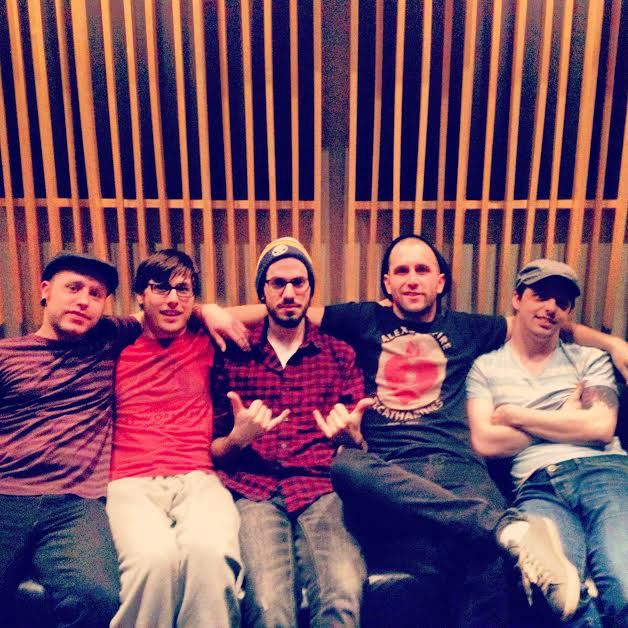 Recently, we had a chance to speak with the band, if you want to find out more about I’ve Got Gloria, I would recommend you keep reading!

How did you all meet? Was it a band a first sight?

IGG: It definitely took a little piecing together before we found that right mix of guys for the band. Tony and Nick were part of the original lineup which they formed with a few friends back in high school. After a few years the band decided to take things to a bit more of a serious level which caused some of the members to disband. On a search for a new guitar player Tony had found Jason through an ad he posted on Kijiji. When IGG began looking for a new front man, Jason, who I had known through my wifes family, had recommended me (Matt) to fill the open position as the lead singer. After about a year our previous bass player Jeremy Morocco decided that the band was too much to juggle with school at that time, thus started our search for a new bass player. Matt quickly recommended Ricky, a long time childhood friend, to fill the position.

What were the biggest obstacles you have overcome, or are trying to overcome, together?

IGG: The hardest part for a band is the point just before success starts to roll in. It’s at that point where you’ve spent all your life savings, sacrificed your job and everything else around you. You’ve basically hit rock bottom putting everything you’ve got into making this a career. It’s at this point where you need all the love and support you can get to help push you through these very difficult times, but because of how emotionally taxing it is for friends and family around you, they begin to lose hope. This is the line in the sand that separates the people who make it in this business and the people who fall just short. For a short period of time you’re on your own. You have to try and push yourself to cross that line when now everyone else is telling you that it will never happen. This, I think, has been one of our greatest obstacles. Believing in ourselves when no one else will. But this is where our band has turned into more of a family. During this most difficult time we are there to support each other. That really tests a friendship.

On your Facebook page it says you have been “rebuilt”. What was the biggest part of your rebuilding process?

IGG: When we first started working together as the new lineup we basically were starting this band over from scratch. All of our musical influences were different which then changed the sound of the band into a completely different direction from its postcore beginnings. We had to rebuild this band from the ground up, learning how to play together, write together, etc. But after a year of hard work I’ve Got Gloria had been “Rebuilt.”

Can you give us a bit of a description of what your EP is about?

IGG: We titled this EP “Here We Are” because we had changed everything about the band, our dynamic, our sound, our look. This was basically us saying to the fans, “Here we are! This is who we are. What do you think?”

Why did you decide to give fans the option of paying for your EP?

IGG: As great as it is to make money from the music we create, we didn’t want the money to come between us and exposing our music to our current fan base and new fans that we try and connect with on a daily basis. Again, we’re basically saying, “Here we are. Take a listen to our music no strings attached. If you like it, support the band by liking us on Facebook. If you don’t like it then no hard feelings.” Funny thing is though, we never advertised about donations. The fans who liked the EP were just donating out of the goodness of their own heart. And we are extremely grateful for their support. If it wasn’t for the amazing fans, we would not be able to do any of this.

What inspires you to write the songs you do?

IGG: We pull inspiration from pretty much everything around us. This is not only fun, but it’s our method of therapy. Relationship struggles, life altering decisions. For me, I grab a lot of influence from my marriage. Being a struggling musician is not easy, especially being married to one. So there is a lot to write about there.

You were just on tour with Halfway to Hollywood. What was it like?

IGG: It was one of the greatest experiences of our lives. We really bonded with them and the band Shark Week. As well as making a deep friendship connection with the booking agent Lance and HTH’s merch girl Tanisha. We started a private message board on Facebook for that tour and we still message each other every single day.

But the shows were amazing. The fans were unbelievably supportive and some of them even drove up to four hours away to see us! We definitely made a lot of friendships on that tour that we are going to hold on to. And we will be coming back very soon!

Where in Canada would you like to tour next and what is your favorite place to play in?

IGG: Our next goal is to book a tour through the west coast of Canada. We did the east coast last year and the southern area this year, so it’s the last part of this country we still need to conquer. However, if you ask Nick this question his answer will be to play somewhere in Vancouver, BC because he wants to buy the $100 hot dog so badly.

P.E.I was a lot of fun to play in mainly because my thought was, “Holly crap, I’m in P.E.I!” Kingston was a lot of fun from this tour as well. The crowd was very interactive. But I don’t think we’ve really found our “favorite” place to play yet. There are still so many more places that we want to tour to.

What do you think are some of the greater things about being a Canadian band?

IGG: I have found that the “higher ups” are a little bit more open in this country. I’ve been very surprised at how much easier it actually is to get in contact with an industry professional for advice than I would have thought in the beginning of my career. I’ve always lived by the saying, “If you don’t ask then it’s a no.” So I’ve taken a lot of shots in the dark and have sent emails to some pretty big players in the business and was surprised that they actually took the time to message me back with advice.

What is next for I’ve Got Gloria?

IGG: We just finished recording our new single When In London at Cherry Beach Sound in Toronto, Ontario. This studio has recorded some big artists like Drake, Jonas Brothers and Rush. The single is going to be debuting on 107.7FM Alternative Buffalo on March 30th where we will be there doing a live interview and performance as well.

On March 29th we will be playing a show for the Canadian release of the song at The Hard Rock in Niagara Falls and then on April 5th in Niagara Falls with our wonderful friends in Shark Week. We are also currently in production for the music video for When In London.

We like to do a few fun questions for the fans…

You’re from the so-called “Honeymoon Capital of the World”, so, do you consider yourselves as romantics?

IGG: I am a very big hopeless romantic. I’ve always been a sucker for the romantic comedies and romantic dates. The guy who likes long walks on the beach and sitting under a stary night sky, that’s me. For my marriage proposal to my wife, I made her a home cooked meal, put candles everywhere and handcrafted a paper rose which I attached the ring box to the stem, placed it in a vase and had it as the center piece for the dinner. After we finished eating I told her she could have the rose. When she picked it up and saw the ring box her face lit up.

Who is Gloria and why do you have them?

IGG: We get a lot of people who ask us that question. We also get a lot of people asking us if we got our name from the TV show Modern Family. But I’ve Got Gloria is actually a short story written by Austin Walton that Tony and Nick read in high school. Not as exciting as it sounds. We may have to make up something funnier like Tony’s friend Gloria is drunk and we had to roam the city trying to find her while also trying to find the location of the secret concert of our favorite band. Actually I think that’s the story line from Nick and Norah’s Infinite Playlist. Good movie though.

Do you have any funny tour prank stories?

IGG: While we were touring out east Nick played this joke on Tony where he trapped him in the bathroom by placing a rope around the bathroom door handle and the front hotel room door handle. I think we left him in there for like half an hour. But besides that we really don’t play pranks on each other. Jason, Nick and I are really big WWE wrestling fans so you’ll most likely see at least one video of us beating on each other during every tour.

If you could eat any food for the rest of your life what would it be?

IGG: Without going into details, after the last tour I know Tony will never look at Kraft dinner the same way again. For me it would either pizza or pork. Or pork on pizza. I wonder if that exists.

Anything else you would like to say to the fans?

IGG: We want to thank all the fans so much. To everyone who bought the EP, downloaded the EP, came to watch us play, bought a shirt, or just liked us on Facebook and talk to us on Twitter. You guys have no idea how much you all mean to us. Truly, if it wasn’t for all of your love and support our families would have yelled at us a long time ago to stop this nonsense and get a real job. But it’s because of you guys that we get to do what we love for a living and call music our real jobs. The 5 year old in me with stars in his eyes thanks you for making his dreams come true.