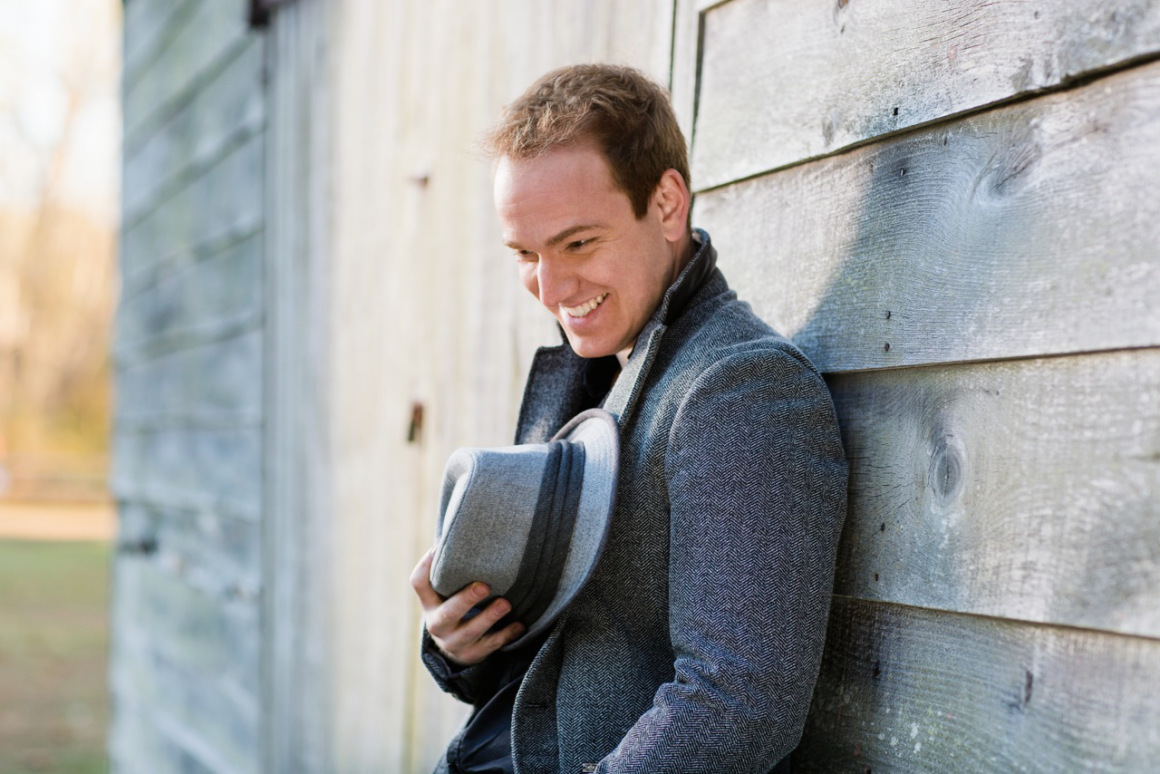 Jonathan Estabrooks is a trained Opera and versatile performer of classical, pops and cross over artist from Ottawa, Ontario. He raised $27,500 USD through Kickstarter to finance the recording of his debut album, and will be releasing it on April 8, there will be a review posted on Canadian Beats in the near future. Jonathan will be performing album release shows in Toronto, as well as his hometown of Ottawa. He will be performing at The Drake Underground in Toronto on April 4th and in Ottawa at The National Arts Centre on April 10th.

I recently was given the opportunity to ask this talented Canadian baritone a few questions during an email interview, to find out more, continue reading below.

When did you decide that you wanted to pursue music as a career choice?

JE: My journey in music has been a long one, though it is hard to pinpoint exactly when I made the decision. From about the age of 7 I was performing in choirs, singing pop and country and appearing with Opera Lyra Ottawa in both the boys choir and then chorus. It was always such a huge part of my identity rather than just a career. I guess when it came time to attend University I thought, why not music and I have never looked back.

You started a Kickstarter to finance the recording of your album, “These Miles” , how did that go?

JE: When this project began I had no idea how I was going to do it, but I knew I wanted to make the best record I could possibly make. I knew that was going to take time and talent and of course, financial resources. That is when I turned to the Kickstarter platform. I had seen many friends use it, some to great success and others in failure, but all with the drive and dedication to carry the campaign through to the end. I thought why not give it a try.

What made you decide to use Kickstarter?

JE: They say if you don’t ask you don’t succeed. I knew the power of social media and the growing popularity of micro-fundraising. What better way to involve friends, family and fans in this journey, than to have them be a part of making it possible. I knew it wouldn’t be easy, but I was confident that the platform and how it connects people through creativity, would work well for me.

What do you find sets you apart from all the other musicians that are out there today?

JE: I think more than anything I want to return to a time when real musicians and real voices had more of a chance to shine. We have become so focused on perfection, auto-tune, over production, that performers can’t even perform their own records live. This is truly sad. I come from a classical and pop background, so I know how to use my voice in a variety of styles, with and without technology. I am hoping people recognize the importance of the live experience and of great voices, cause there are so many that are waiting to be heard.

You are a graduate of Julliard School in New York City, how was that experience?

JE: I remember auditioning for the school. It was my last audition of many and I walked into the building somewhat awestruck by the name, the reputation and the incredible creativity and musical talent within its walls. To be accepted was unexpected, but a true honour and joy. It was a chance to work with the best in the business and to share time with some of the most driven and passion artists I have ever met.

You have performed all over the world and performed with the Toronto Symphony Orchestra, Israeli Chamber Orchestra, and also alongside Broadway stars Ashley Brown and Aaron Lazar. What would you say has been your biggest achievement up until now?

JE: That’s a difficult question to answer because I find myself constantly looking forward and the next big hurdle, the next challenge. If I had to pick one it would probably be this album. As cliché as that might sound, this passion project has brought together all of my loves and passions together, from my love of great music and performing to the gear head part of me, that loves details, scheduling and long hours in the studio.

What would you say your biggest goal is?

JE: I don’t have just one and to be honest, they are always in flux. If I can continue to make my passion my life’s work, and share that with others, then I will be fulfilled.

Where would you love to perform, that you haven’t had the chance to yet?

Let’s talk a bit more about your upcoming album, what made you decide to do an album that consists fully of cover songs?

JE: As I began this process I thought a lot about the kind of record I wanted to make. There has been a great deal of focus on singer-songwriters in the last decade or more which is incredible, but gone are the days of great vocalists, performers like Frank Sinatra and Streisand and others, who were not songwriters themselves, but great interpreters of song. The same goes for opera singers and most classical performers. The last thing I wanted to do was come out of the gates with a first album that was judged more on quality of songwriting than on performance. I continue to write and have collaborated with my brother in this department (the bonus track was a co-write with him) and hope to do more on future projects, but my goal for this album was to pick songs that I have always loved, that I could connect with and that I could make my own.

If  you had to choose one song from the album to be named your favourite to perform, which song would you choose? Why?

JE: All of the songs on this album mean so much to me it is hard to pick just one. I would say you can’t go wrong with ‘Any Place I Hang My Hat’! Nothing like a full orchestra and brass! Of all the tracks on the album though, the one I am most proud of is ‘Calling You’. It captures an intimate moment with such magic, rought together by my incredible producers Dave Reitzas and Oran Eldor.

Is there anywhere we can hear originals from you?

JE: Track 12 the bonus is track is an original. Will be looking to future albums to flex my song-writing muscle. It is a unique skill set.

JE: After this album launch and mini tour (concerts in Montebello, Ottawa, Toronto) I’ll return to the Roy Thomson Hall for 3 concerts in May with the Toronto Symphony followed by Belcore in Elisir d’amore with New Rochelle Opera and additional concerts with the Vancouver Symphony and Seattle Symphony. I hope to take the record on an extended tour this summer.

Of course, we need to have some fun during all of our interviews, so now onto that portion of the questions.

What was the first song you ever remember singing?

JE: Froggie Went A-courtin’ by Burt Ives in the car with my dad.

If you are not working on music, what could we find you doing?

You are stranded on an island, what 3 items would you want to have with you?

JE: Avocados, sunscreen (I’m a redhead after all), ipad loaded with great novels.

What is your all time favourite Disney movie?

JE: Thank you for supporting me on this incredible journey. I am so excited to have created this album together. There is no question that you give more to me than I could ever give in return.