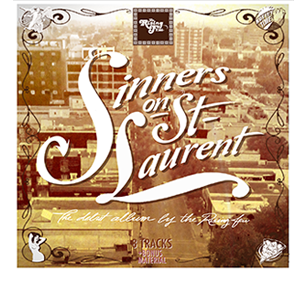 “The Rising Few” are a musical group based in Montreal, Quebec, who have fused the
sounds of folk, blues, rock and pop into one, unique music styling. Karim Terouz, originally
from Cairo Egypt, moved to Montreal at the age of 25 to join with Hubert Trembly (guitars)
and Andrew Sudlow (bass) and form a group. Isaac Gesse (trumpet) and Harvey Bienaime
(drums) joined soon after and ‘The Rising Few” was born. After releasing their EP “Red
Rhino Sessions Vol. 1” in 2013, they took first place at the LME (Landmark Events)
showcase competition and then thought it was time to make a whole album. That brings us
to “Sinner’s on St. Laurent.”

“Sinner’s on St. Laurent is an 8 track album with 5 additional bonus tracks, running a 54
minute play time. The piece was written by Terouz, inspired by his early job as a bartender,
about his observations of night-time Montreal. However, he has made the lyrics vague
enough to allow interpretation and relatability to other experiences.

The first thing about the entire album is that it has a very unique sound. There is an
obvious air of folk, but there is also such a blend of sounds that it is musically pleasing
to the ear. Especially after constantly hearing pop music. Some songs sound more folk/
blues than others, but then some also sound rockier, there’s even some rapping! It’s a
well-balanced concoction of sound. And I must say the trumpet playing is phenomenal. I
personally love the sound of a trumpet.

Terouz has a voice that fits the music beautifully. He can switch between an upbeat, rocky
voice and a soothing, blues voice in an instant and the different ways he uses his voice
depending on what way the song is pointing is incredible.

To get a feel for the sound of the band, I would recommend starting with the title track
of the album “Sinner’s on St. Laurent”, and “Not This Time (feat. Steve Liquid Hawley)”.
“Sinner’s on St. Laurent” gives a general feel for the album, introducing the band’s sound.
“Not This Time” has a bit of a rockier tone and features a rapping bit, showing off the many
aspects of the band’s music.

There are also acoustic tracks as bonuses on the album. The acoustic tracks include “Date
in Montreal”, “The Start”, and “Tomorrow’s Lullaby” which were all on their first EP. The
acoustics give a new and more intimate twist to the songs that are more familiar from
being already on a CD.

Overall, the album has an amazing, unique sound and the vocals are extremely impressive.
There are tracks for when you’re having a slow day, or tracks for and upbeat evening.
“Sinner’s on St. Laurent” is a wonderfully put together album that would be welcome on
folk/blues and rock/pop fan’s shelves alike.