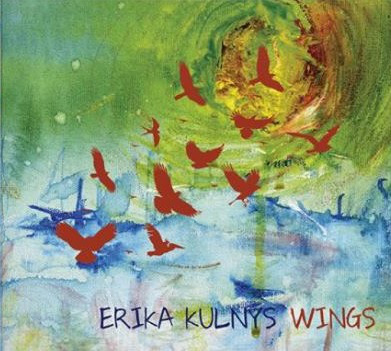 Erika Kulnys, born in Nova Scotia, is releasing her newest album, Wings on March 28th
been eight years since the release of her debut album Hurricane and she now releasing two new albums, Wings and Revolution.

Wings has a very unique sound; differentiating itself from typical ‘country’ or ‘folk’ music. It doesn’t seem to stick to one genre, but moves all over the map, touching on each one, and in doing so, creating an album that will appeal to all sorts of music lovers. And Erika herself has a voice like no other that I have heard. It has a softness that brings peace and tranquility with it. Mixed with ingenious and very impactful lyrics, her voice can move mountains.

Erika is a successful poet and song-writer, and, for people looking for meaningful lyrics, those in Wings will not disappoint. Erika is obviously letting listeners into her world through her music, as is easily heard when listening to the lyrics.

She has traveled to Korea, Ireland, Latin America and the USA, giving her ample more experiences to write about and more influence as well. Wings is a sure step up from her first album, Hurricane and delivers itself in the most flattering of ways.

If you are looking for a sneak peek into what the general sound of the album is, I would
recommend the title track “Wings” and the fifth track “Water to Wine”. “Wings” shows the softer side of the album while “Water to Wine” has a more edgy tone to it. The two tracks are perfect examples of the diversity of sound that the album provides and portrays how Erika can be soft toned, but then switch into a more rocky sound. Then there is “Good Time Gangster” which goes right into a jazz sound and sends the listener into a world of black and white. Listening to it is like watching an old detective show.

Wings has an overall diverse sound and switches between genres in a beat. The lyrics are
inquisitive and clever (which is hard to come by in most music these days). Be sure to mark your calendars for the 28th! And, if you’re in Halifax then, drop by the Round Church to hear it for the first time! Doors open at 7:30pm and the release begins at 8pm!