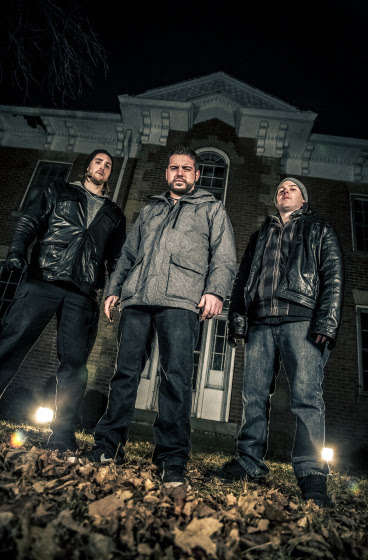 Deathpoint is a metal band from Hamilton, Ontario. The band consists of Tom Emmans on vocals, Tim Ross on guitar and Brad Gold on bass. They have recently released their album “Sinister” on October 1, 2013 after their debut album “Fixation” in 2010 and their EP “Suffer” in 2011.

I had a chance to do an email interview with Guitarist, Tim Ross. Keep reading to find out more about Deathpoint.

Where did the name Deathpoint come from?

DP: Brad came up with the name. Not a very interesting story for this one (lol). The original members thought it was a killer name and it stuck.

Many people have come and gone from the band, what is the experience like having so many changes?

DP: It’s been a roller coaster ride that’s for sure. It was a relief for a couple of guys because we could see that these guys’ hearts weren’t in it anymore but at the same time it was a real downer because these guys were our buddies. It was painful but we kept on plugging away and we are just now solidifying our current lineup. It’s a rough experience that a lot (if not all) bands go through at some point in their careers, for us it happened right at the beginning.

What was the inspiration for your album Sinister?

DP: The record really delves into the idea of mental health, relationships, anger, rage, etc. Tom brought a lot of experience to the record in terms of having enough background on all subjects touched upon, but we all contributed something to the album as a whole, not just riffs or fills but we all sat down and discussed the direction we wanted to go and heard some pretty intense things about guys in that room who have been friends for a long time that we didn’t know.

How does it differ from the others?

DP: I think we’ve done a pretty solid job not pigeon holing ourselves. We took a lot of different influences some of which are very obvious, and blended them to make a solid record I think. It’s hard to say what’s different about it, I guess its maybe the fact we have a little something for everybody on one record. We have really heavy stuff for the die-hards and we have some very mainstream melodic stuff for people who might not be that into metal.

What has the response been like from the fans?

DP: Response has been great, not just for the record but for us when we arrive at venues and things like that. I would absolutely not say we have become celebrities, but when we show up at our shows there’s a lot of people who just line up to take pictures with us, shake our hands and talk to us. I think it’s pretty cool that our music and live show have that kind of effect on people and its really cool to see that come out in people.

What goes into the writing process of your songs? Is it one person or more of a collaboration effort?

DP: Deathpoint composes music in two ways. There is the live jamming things out approach and there is the “let’s all sit in front of a computer and record guitars” approach. Both have their pros and cons. Jamming things out is a great way to get to know the live feel of a song and instantly know whether it’ll translate well from the stereo to the stage. The biggest problem with doing things this way is that there’s always someone with an instrument in their hands who keeps playing when we need to talk about the next part. The other approach is good because it’s easy to analyze parts and arrangements because they are recorded on the screen in front of you. Either way we always eventually jam it out before committing to it on record. Tom then gets the demos sent to him and he sits down and either writes new lyrics for that piece of music or he fits lyrics in that have already been written.

Is there any Canadian band that you look up to for inspiration?

DP: A band like Threat Signal has been at this a long time and they are from just down the street from us. Jon Howard is the only remaining member that was part of the original band and to see someone stick around when everyone else is bailing (for many reasons) is inspirational to a group of guys that this is all new to us. I think that we are motivated by that, seeing a band keep pushing even when members leave or tours fall apart or whatever really. It helped us get through a tough time over the past few months where we lost three members from the band.

Where do you draw in some of the sound of your music from?

DP: We all have a lot of different influences so the well never runs dry I guess you could say. We draw on influences like Soilwork, Tesseract, KSE, Lamb of God and Slipknot, and Tom brings major influences of Tool and NIN.

Do you think you’ve grown as a band since you started and if so how?

DP: I think we have gotten closer because of the time we spend together on tour. I think that the band has grown even more since Mike and Henry left and we had to replace them on the fly as we had headline shows approaching and had other commitments that we could not get out of.  I guess you could say there was some bonding for sure, and I think we all got a chance to see how we all do under extreme pressure as well as perform under that pressure.

DP: We are actually waiting for our next tour to be confirmed from our management. The plan is to be touring steady until the fall and then we plan on getting back into the studio. We had our run on radio which was great and our music video for Between the Lines is still chugging along so we definitely have a lot to work off of but we are hoping to jump onto the Canadian festival circuit over the summer and basically just put as many miles as we can on these songs.

We always do a bit of fun questions for the fans.

What song would you rather have on repeat for the rest of your life, nonstop?

DP: I’d have to say Redneck by Lamb of God. I used to make guitar videos before I was in Deathpoint and that was my favourite song to play through.

DP: Video games. When we write, I play video games. When I have to learn new material sometimes I put it off so I can game. Sometimes it gets in the way but its something that keeps me in a good head space.

Anything you’d like to add to say to your fans?

DP: Thank you guys so much for your support on this record. We are excited to see all of you very soon!!