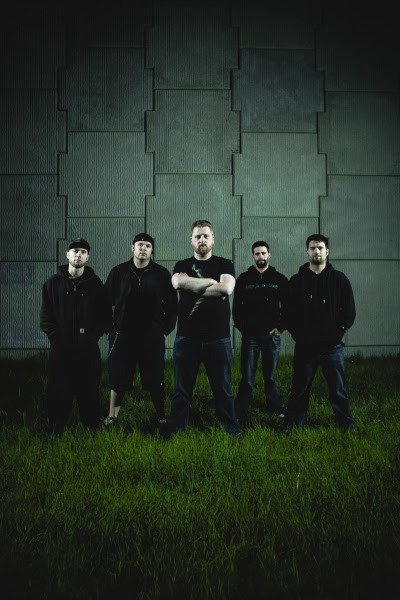 Until Dawn is a Metal band from Fort McMurray, Alberta. The band consists of Adam Macleod on vocals, Deke Worrell and Steve White on guitar, Darren Ehler on bass and Luke Worrell on drums. They have 2 albums released, one self titled that was released in 2011 and their newest called “Horizon” in 2012.

We had a chance to ask the vocalist, Adam Macleod a few questions during a virtual interview, keep reading to find out more!

UD: A few years back the Worrell brothers had a New Years party, Steve and Luke got to talking and went and had a little jam. Deke and I were not too long to follow as we we’re both in other bands that weren’t really doing anything. Steve at that moment had a lot of material which we all worked on to become our first record.

Where did the name Until Dawn come from?

UD: It was a little joke made by a friend of ours after a late night jam. He suggested the name, we all laughed and then it stuck. Looking back I wasn’t to fussy on the name at first but it has since grown on me and I find it suits us as a band.

You shared the stage with Kiss, how was that experience?

UD: The Kiss show was on Canada Day in our home town. What better way to celebrate the holiday then opening up for Kiss? This was our first real Festival like experience playing in front of a few thousand people and it was nerve wrecking to say the least. But we we’re excepted by the crowd and had a blast the whole time. This for us was a great learning experience and opened us up to the festival type shows.

What bands have inspired you to do what you do?

UD: For me, I come from a punk/metal back round so there are a lot. When it comes to metal theres no greater then Pantera. Dime was/is/always will the greatest. We did have a chance to play with Hell Yeah a few years back and that was mind blowing to say the least.

You say your genre is a type of “melodic metal”. Can you explain where the “melodic” comes from?

UD: We like to think we are right on the line between metal and rock. We all do prefer the heavy side of what we do but if that’s was all we did I think we wouldn’t have any diversity. That’s where the melodic side comes in. We like to try to grab our listeners with hooks and great melody lines that stay with you. I find having diversity keeps the listener interested and generate a sense of feeling with the music. All great art should make you feel.

What’s next for Until Dawn this year?

UD: Tour, Tour, Tour. We are currently planning a Canadian tour that will include some areas we have never been for this spring. Then in the summer we are going to focus on some of the Festivals out here in the west, then wrap the fall up with a west coast tour. In the mean time and in between time we are going to release a few more videos and some secrete tunes we have been working on….SHHHHH.

You recently released a guitar play through of your song “This Fallen Fortress”. Why did you choose this one?

UD: This song has had the most response then any other song on Horizon so far. We feel that it best represents the grove of the record and is a staple now in our live set. We wanted to give people a chance to see the song stripped down and learn how we play it.

Do you wish your favorite bands did stuff like this? What does it mean coming from a band point of view?

UD: When I was growing up we didn’t have this option. You either had to learn it from ear or Tabs which always has some errors. This is a great tool for bands to engage their fans and also give them a first hand look at the way songs are performed. We want to get some feed back from the fans and do more things like this. We are looking into doing some live streaming of a few of our jams so people who have never seen us live will get that experience, and then they can get a chance t ask us about things live and get an answer right their. This is something I wish was available to me when I was a growing musician.

How would you describe your music to someone whose never heard it?

UD: A blend of all forms of heavy metal, boiled in a messy stew of booze, blood and sweat. We aren’t for everyone, but we are for most.

Where do you see Until Dawn in the next year?

UD: That’s a hard question, we have recently got new management and publicist. Our team is working hard on a lot of different projects to bring us to a broader audience. We are working with Radio and some other out lets and plan on hitting the road hard. I would like to see us

We like to throw in some fun questions for the fans.

Do you have any funny tour stories?

UD: Last year we meet Danzig and Joey from Slipknot. We had a day off in Edmonton and Danzig was playing. Darren and I went to get tickets and seen him at the record store. I asked him about his Kitty and he just laughed. Than later that night at the show I physically bumped into Joey, (I actually ran into him) I was like “aww sorry man I didn’t’ see you there….HF your Joey”. He was really cool about it as I only spilt a little of my drink on him. I was a nervous little girl,lol.

If you could only play one song for the rest of your career, which would it be?

UD: That’s is another hard one. Personally Roamers and Lurkers is my favorite to play live but it is a pretty demanding song. I have a deep connection to our song Horizon as its about my grand father who passed away so I would say that song.

Which Canadian band/artist is your favorite?

UD: I’m a huge Alexisonfire fan (even have a tattoo of George) But if I was to answer for the band I would say it’s a tie between All Else Fails and Without Mercy. There are a ton of others but they stick out to us.

If you were asked to play a song right now, what is the first that would come to mind?

UD: WM3, this song has the most meaning to me as it’s about the injustice of the West Memphis 3.

What song describes your personality the best?

UD: I would say Polar Parallels, its about not knowing the future and expecting the unexpected. I constantly question things and this song is about being a good judge of that.

Anything else you’d like to say to your fans?

UD: We are here!!!!! GET AT US!!! Feel free to send us message, ask us a question, let us know what you like and don’t like or just drop a line to say hi. We want to engage more with you cause with out you, we are nothing. Thanks for listening and supporting us for the last few years and we look forward to meeting all you out on the road this year, thanks again!