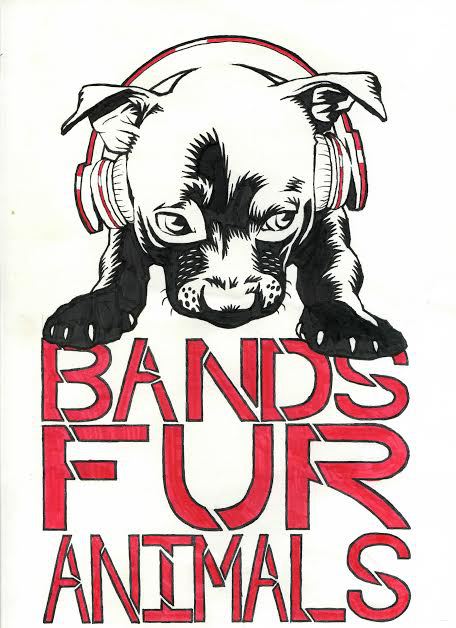 Bands Fur Animals is an organization which was born on June 22, 2013 in St. Catharines, Ontario, This is the second interview that Canadian Beats has done with Jess Greene about the organization, you can read the first one here: http://canadianbeats.wordpress.com/2013/10/30/interview-bands-fur-animals/

We thought it was time for a follow up interview, considering all the new & upcoming information they have to share!

First off, for those who don’t know about Bands Fur Animals, can you give us a brief history?

JG: Bands Fur Animals (BFA) was developed June 22, 2013 originally as a charity showcase.  The idea was a hit and from there I took it upon myself to develop BFA from an annual show into an organization.  We work with the music scene from Niagara and GTA to put on shows in order to raise money for the Lincoln County Humane Society.

Have their been any changes in the band roster that you would like to discuss?

JG: We have parted ways with a few bands on the roster but have maintained a professional relationship otherwise.  We have also added Still Life a band from Hamilton to our list of bands.  They are very talented and love assisting animals any way they can.  We have also developed a few “side line” supporters – bands that would join us if they could but support us regardless. They are: Partycat and July.  We have also gained support from music icons Mark Spicoluk and Jesse Colburn as well as 1955 Ms. America/ 1966 Catwoman Lee Meriwether.

Can you tell us about any bands that you would like to recruit into “Bands Fur Animals”?

JG: At the moment we are looking at a few bands to join our family. They are: Stick and Poke (Toronto, ON), Mrs. Johnston (Niagara-on-the-Lake, ON), Danny Lamb & The Association (N.O.T.L, ON), Justin Toito and The Highrollers (Niagara Falls, ON), Heavy Hearts (N.O.T.L, ON), The Mandevilles (St. Catharines, ON), Ian Blackwood and The Bipolars (Toronto, ON) and Ocean Cure (Oakville, ON).

If someone is interested in being a part of the organization, how could they go about finding out more about it?

JG: We are currently full staffed at this point, adding on Joshua Cottreau of Partycat as our Merch / Door / Stage Hand and Ryan Skursky as our videographer.  We do take volunteers to help with putting posters up and selling tickets, even running our Lincoln County Humane Society info table.  They can visit our website at www.bandsfuranimals.ca or facebook at www.facebook.com/bandsfuranimals

Are there currently any shows in the works?

JG: We have four major events rather than shows in the works right now. We will be participating (as well as our bands) in KOI Music Festival in Kitchener as well as SCENE Music Festival in St. Catharines.  We’re planning an informational tour an “assembly” for schools with the Lincoln County Humane Society to raise awareness about animal shelters and what the community can do to get involved. Finally, we’re planning our big annual Bands Fur Animals show! All of our bands will be playing which will be quite interesting considering we range from post metalcore to country.

You mentioned to me that there is currently a compilation CD in the works for BFA, what can you tell us about that?

JG: We are currently putting together a CD with singles from each of our bands, including a special BFA song. These CD’s will be sold at our shows to raise money for the Lincoln County Humane Society. Crossing my fingers that we get to work with Adam Newcomb, of Newcomb Studios, for the special song.

The “Bands Fur Animals” mascot is an adorable dog by the name of Piper, anything new with her?

JG: Oh Piper! How my heart melts for her! She is doing very well – we have begun Puppy training and so far she’s learned to sit. That took about 2 months – haha! We want to be able to have her 100% trained before we take her to festivals in the summer.  She has two best friends Matilda (Bulldog) and Sloan (Great Dane).  She’s loving life with me and my boyfriend Eric.

JG: 2014 has only just begun! We have already accomplished so much.  We are opening an actual office and will no longer be huddling in my garage or my kitchen table.  Also, we are working with Skursky Productions to put together a documentary style video to raise more awareness about BFA.  We have just obtained a partnership with local radio station 103.7fm CFBU and the Lake to Lake show and will be making regular “appearances”.  We continue to work with Rise Above Restaurant and have developed new working relationships with Mike’s Music in Thorold and IndoorShoes in St. Catharines (another promotional company).

Thank you so much for keeping in touch with us! Look forward to continuing our working relationship with Canadian Beats as well