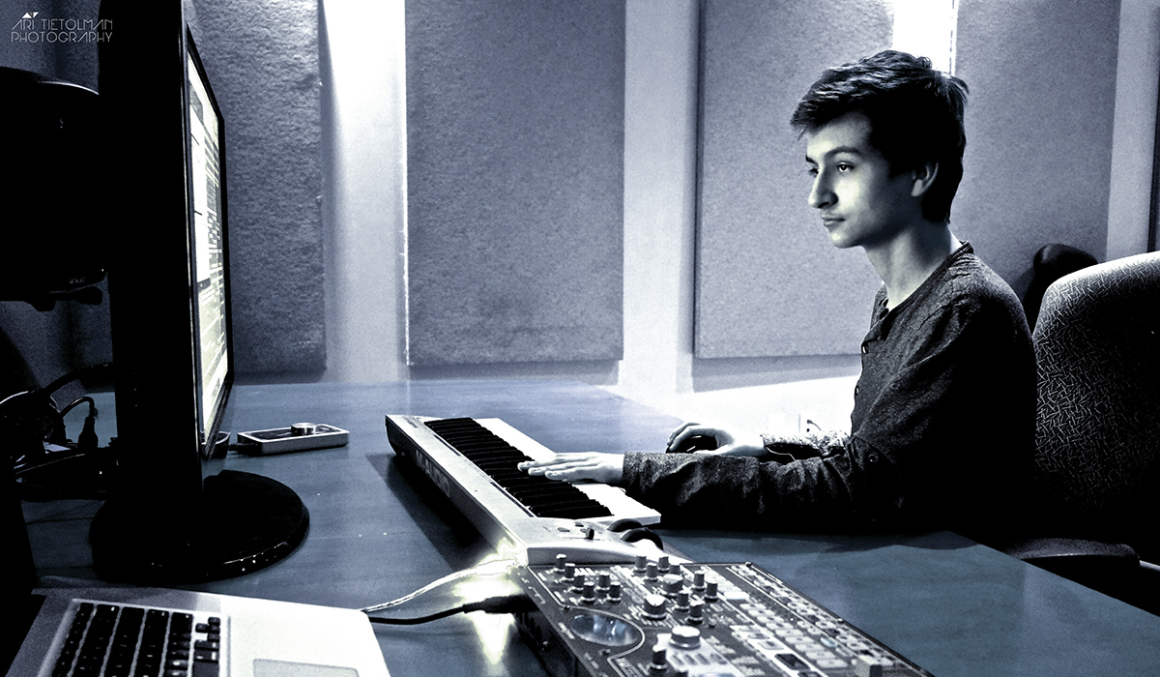 Cedric de Saint-Rome, AKA: Housefly, is a Canadian songwriter, composer, DJ, and producer with a secret most would find hard to believe. In his short career as a musician, he has already created a personal catalog of well over 500 original works and remixes that spread across a full spectrum of musical genres including Classical, Jazz, Rock, Pop, and EDM; but what sets this music prodigy apart from the rest, is the fact that he is only 14 years old!

Despite his young age, Housefly has been writing and producing music for over 8 years now (having composed his first piano piece when he was 6), and at the young age of 11, he posted his own creative adaptation of the popular “Party Rock Anthem” by LMFAO, to his YouTube channel. The video literally went viral overnight, but unfortunately it was blocked about two weeks after its upload, since it wasn’t approved for release by LMFAO’s label. By then, it had already accumulated approximately 30,000 views.  The video was eventually unblocked a few weeks later, but the chain had been broken, and view counts didn’t rise too much thereafter.

In the EDM scene Housefly is already becoming recognized for his ability to create memorable melodies, electrifying synths and thunderous sub-aquatic bass-lines that would have any EDM lover craving for more. It won’t be long before this musical “Jack-of-All-Trades” becomes a HOUSE-hold name. I had the privilege to conduct a virtual interview with Housefly this past week, and here’s what this truly remarkable young man had to share with us…

The first thing I have to ask is how did you come up with your name, Housefly?

Housefly: There was a legit housefly buzzing about when I first tried making dance music and I really wanted to put a remix or something on YouTube (when I didn’t have a stage name) and then I thought it would be a pretty decent idea just to name myself ‘DJ Housefly’. Later I realized it was becoming more and more popular to attach the ‘DJ’ to stage names, so I figured just to be original I’d drop the ‘DJ’ completely, which left it with ‘Housefly’.

How did you get into DJing at such a young age?

Housefly: Before I started DJing, my older sister went clubbing every weekend. She’d send me these tracks she heard in the clubs that she thought I might like. I then started exploring this strange sounding music now called “EDM” (Electronic Dance Music) that really got me hooked.

Besides your age, what do you find is the main thing that sets you apart from others in this industry?

Housefly: I try to be as original as I can. When I listen to the Beatport Top 10 tracks, I know what sounds are trending and I figure out generally what NOT to produce in order to maintain an original sound.

Housefly: I don’t really know what instrument I prefer, to be quite honest. Piano really helps for figuring out melodies and knowing exactly what I’m doing in terms of harmony in my tracks, and drums really help for the rhythm aspect. They’re all just fun to play!

At the age of 11, you made a remix of LMFAO’s Party Rock Anthem, which was going viral before it was blocked, how did it feel to see something you made get so many views?

Housefly: I was super surprised. A couple of days after I released the remix, I woke up to see how it was doing, and poof, over ten thousand listens! I was expecting a hundred listens, maybe two. But this was definitely a shock, and it rose steadily to almost thirty thousand over the course of a few weeks—until it got blocked by UMG a few times, and the listens stopped.

Do you prefer to remix existing tracks or create original tracks?

Housefly: That’s a pretty difficult question. Remixing and producing from scratch both have their pros and cons. With remixing, it’s easier to get started, but you’re restricted in terms of what you can do with the melody and everything else. Whereas with producing original tracks, you’re more free to create to your imagination’s content. I would say I prefer producing, for exactly this reason—there are no limitations.

Up until now in your career, what has been your biggest accomplishment?

Housefly: Most likely getting recognized for what I do today. It’s just a pleasant feeling knowing that people enjoy my music and want to work with me to continue developing musically.

If you had the chance to work with anyone in the future, who would your first choice be?

Housefly: There are many talented artists and producers out there. There are a few guys I’d be happy to work with—including Whyel, Blasterjaxx, Ummet Ozcan, and Martin Garrix. I’m also really excited to be working on collaborations with Royce&Tan and RCDJ at the moment.

Do you have any advice to young people trying to make their way into the EDM scene?

Housefly: Don’t be like the others. If you’re new to sound production and synthesizers, listen to new and popular EDM tracks. Mess around with all the settings and parameters; familiarize yourself with your synth; try making sounds that sound nearly identical to the synths you hear in those popular EDM tracks, but don’t release any of it to the public. Once you’re comfortable with sound design, mess around more with other synths and develop your own signature sounds. That’s when you can start releasing your tracks.

Housefly: They’re absolutely important. Social networking is how you can efficiently show the world who you are. The main websites I use for these purposes include Facebook and Soundcloud. I’m thinking of making a Twitter account though since it’s becoming more of a big deal.

Housefly: I’m currently doing a remix for a really great track by RCDJ named “BANJO” that’s under a somewhat tight deadline, so I’m putting all my time and effort into that. And in the coming weeks or months, I’ll be doing an EP featuring a few of Housefly’s original tracks—new and old.

If you’ve read any of our interviews, you know that we always include a “fun” portion that may help your fans learn something new about you.

When you’re not working on your music, what could we find you doing?

Housefly: You could find me casually raving about in my studio to hardstyle tracks from the 90’s, or maybe eating at a McDonald’s somewhere.

If you had to choose only one of your tracks to show someone what you’re all about, which would you choose? Why?

Housefly: I would probably choose my most recent original track, “Tiger”. It features a lot of heavier synths and also a lot of melodic elements.

Housefly: Well theoretically, if a car were to beep somewhere close by enough for the sound to reach my eardrums; I would be able to figure out what note it beeped at, unless it was one of those insane obnoxious 40’s car honks that sound like one of those loud alarm clocks made for people in a deep state of sleep. Also I like beat-boxing and I’m a fan of space and aviation.

And of course, do you have anything you’d like to say to your fans?

Housefly: Stay true, thanks for following me, don’t stop raving, all that good stuff;)