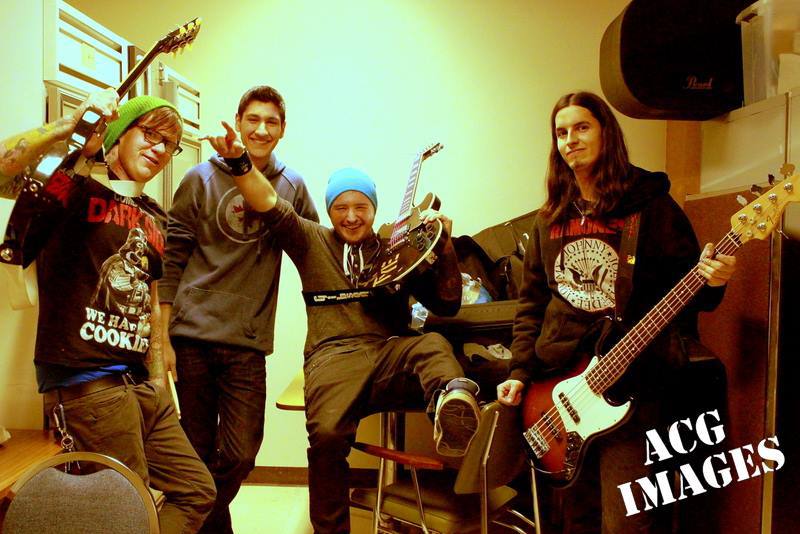 Charlie, Monster! is a pop punk band from Winnipeg, Manitoba. They formed in late 2012 when members Tye Barker and Reno Capizzi met and found their other member Eric Lavallee. In August 2013 they released their debut EP, ‘The Voice That Suits Us’, and followed up with a single that was not on the EP, “Shark Tank”, in October 2013.

Both releases are available on their Bandcamp here http://charliemonster.bandcamp.com/. They have also released a video for “Shark Tank” https://www.youtube.com/watch?v=2eMKRlD3cSY.

If you want to learn more about Charlie, Monster! check out their social media below and be sure to read this interview.

First I must ask, how did you come up with your band name if no member is named Charlie?
Tyler: We practice on St. Charles street so that’s where the Charlie part came from. The word Monster was kind of used to describe our sound.

Eric: I didn’t have much to do with the name, but I had nothing against it.

Reno: We we’re sitting in a parking lot when it came about.

What made you want to pursue music in the first place?
T: The free spirits of Blink 182’s members and Angus Young’s Rock & Roll Swag

E: Greenday’s Bullet in a Bible

What kinds of things inspire you to write new songs?
T: Just everyday life, hopes, dreams, imaginations, having empathy for people.
E: Learning, coping, and appreciating the good things.
R: I listen to a lot of other bands for inspiration.

E: My Grandpa, and the Misfits

What is your writing process like? (e.g. lyrics first, melody first, etc.)
T: The guitar riff usually comes first, if the lyrics comes first than it’s because something is highly affecting me.

E: I like to take a good riff or chorus and just build around it.

R: I usually write the lyrics first when the melody of lyrics is stuck in my head, write them down so I don’t forget but sometimes it’s the guitar first.

If you could work with any band or artist, alive or dead, who would it be and why?
T: Angus Young because he is awesome. And I’d like to see if I could keep up with him running around and playing for 3 hours straight.

E: Guns N Roses because of their amazing musicianship & energy

If you could tour with any band or artist, who would it be?
T: This will never change. I pick Blink.

R: It would be cool to tour with Blink 182, or Simple Plan as I’ve been listening a lot to there music and enjoy there style a lot lately.

If someone hasn’t heard your music before, how would you describe it to them? What song would you suggest they listen to first?
T: The subject matter is really universal in the sense that everyone can relate to it, and ‘Shark Tank’ because I want the whole world to stand with me against the evils in the song.

E: Pop with some rock and roll, and I suggest ‘Meantime‘.

Out of all of your songs, which is your favourite to perform live?
T: Meantime. The ending gives me chills every time.

R: They’re all fun to perform, but personally I enjoy Meantime.

Now a few fun questions, What is the first song you remember listening to?
T: Standing Outside the Fire by Garth Brooks

E: Even Flow by Pearl Jam

R: I listen to so much music I can’t even remember

Go to karaoke song?
T: Tim McGraw – Something Like That

You’re stranded on a desert island, name three things you would want to have with you.
T: Christina Applegate, Anne Hathaway, Puzzle that last 4-6 years

E: Wherever they have burgers or guitars

Oddest habit?
T: I still do laundry at my parents even though I moved out 4 years ago.

E: I can sometimes see in the dark..

R: Sometimes I walk into a room, walk in a circle then leave for no reason, I don’t even know why I do it.

R: Traveling, I’ve been to some cool places

Any Canadian band/artist you would recommend to your fans?
T: Faber Drive

If you could see any band or artist in concert, who would it be?
T: Eminem

E: the Misfits with Michael Graves

Would you rather perform in small, intimate venues, or larger arenas?
T: Larger Arenas

And lastly, is there anything you’d like to say to your fans?
T: Stick with us, we’ll be there for you, much love, thanks!

R: Thanks for all the support you’ve given us