By Jordyn Armstrong on February 26, 2014@jordynhannah95 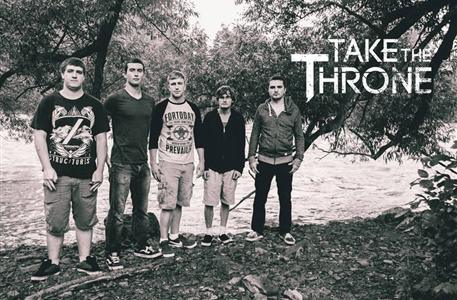 Take The Throne is a Canadian metal-core band from St. Catherines, Ontario. They are an up and coming band with a cause. They work closely with an organization called Bands Fur Animals. The band has Landon Smallwood on vocals, Tom Jakobs and Brad Feor rocking the guitar, Jake Nowak playing bass, and Kurtis Fulton pounding the drums.

Can you tell us a bit of what new fans can expect from listening to your music for the first time?

TTT: We do have a lot of influences but bands that inspire us the most include August Burns Red, After The Burial, As I Lay Dying, The Air I Breathe, Born Of Osiris, Protest The Hero and many others. These are some of the bands that we often compare ourselves with. First time listeners can expect heavy, high-energy music with intricate melodies.

What inspires you when writing songs?

TTT: Each member has many influences that give us inspiration as previously mentioned. However, the bottom line is that we write music that we would want to listen to ourselves.

What is Bands Fur Animals?

TTT: Bands Fur Animals is a music promotion group that puts on shows to raise money for local animal shelters and charities.

How did you get involved with BFA?

TTT: After a building a following through a few local shows, Jess Greene approached us about working with Bands Fur Animals and she is currently our manager as well.

Your debut EP, “Legacy” recently just came out, what has the response from your fans been like?

TTT: The response has been overwhelmingly positive; we didn’t get booed off any stages yet so that’s a good thing haha. But we are really excited about the EP we will be recording at Sundown Studio this June.

What can you tell us about your single “Deserter”?

TTT: Deserter was the first song we wrote with our current lineup, and is a good example of where the band is musically now compared to when our EP was written. We are also spending a lot more time writing together instead of individually. This allows us all to contribute to the writing process and helps to ensure we are producing something we hope everyone will like.

Do you plan on doing any touring in the future?

TTT: We have a 3 day weekend run coming up with Dreamer/Deceiver at the end of March, and are looking to begin touring much more extensively this summer.

As usual, we like to ask some fun questions for the fans:   If you could only eat one thing for the rest of your life, what would it be?

TTT: I think it’s safe to say we could all eat pizza for the rest of our lives (Or however long our bodies would handle that diet).

Which Canadian artists inspire you?

TTT: Rush and Protest The Hero are two big ones, but there’s a ton of other cool bands like Structures, Intervals, and Counterparts that we all listen to on a regular basis.

If you could tour with two other Canadian band/artists and go anywhere in the world, who would you tour with and where would you go?

TTT: It would be really cool to go to Europe with Protest The Hero and Intervals. Those bands have helped keep the technical metal scene alive and its refreshing knowing that people still appreciate the hard work that goes into creating and playing music of that caliber.

What is one weird talent that you have?

TTT: We have this weird ability to create sounds at different frequencies, and arrange them in such a way that is aurally pleasing.  Also our drummer has the ability to grow his chest hair in the shape of a perfect X. We only know this because he rarely keeps his shirt on while playing.