By Jordyn Armstrong on February 23, 2014@jordynhannah95 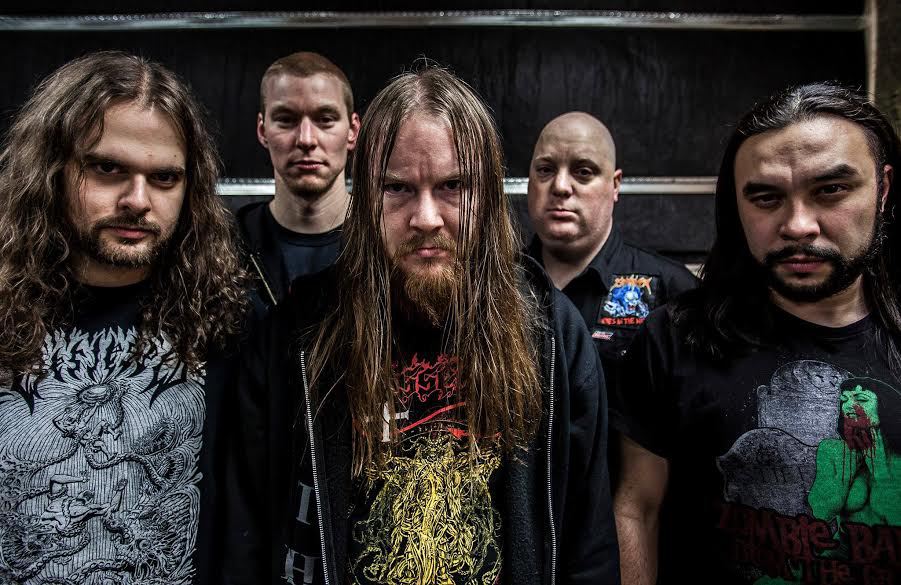 If you are looking to hear some tunes, check out these links:

Where did the name Endless Chaos come from?

MM/EC: The name Endless Chaos came to me when I used to work overnight shipping and receiving at a grocery store. It seemed like every time I walked into the warehouse there was a 7 foot mound of garbage bags full of rotten food, boxes and pallets everywhere, and a truck waiting outside to be unloaded. I guess it was pretty chaotic and seemingly endless.

We’re you all friends before starting the band? How did it form?

MM/EC: When the band started I asked my brother Alex Menza if he wanted to play drums over some songs I had written. Alex and I had played in a band together prior to Endless Chaos so naturally our playing meshed together quickly. We had a couple line-up changes before Jordan Dorge joined Endless Chaos in November 2011, Jordan and I have been friends for quite a few years now and always wanted to play in a band together.

What I feel brought the current lineup together was playing shows as a 3 piece for the first half of 2013, just guitar, drums and vocals. The shows included one with The Brugada Effect which Jeff Humarang and James Burton play guitar and drums for respectively and another with Forged in Fire, Mike Toews used to be their front man. After those shows Jeff was interested in playing bass for us and Mike asked if I’d be interested in working with a second guitarist. Rehearsing with the two of them been has been a blast, they both help add a dynamic that was missing in Endless Chaos like harmonies, guitar solos and crazy bass lines.

In mid October of 2013 Alex was let go from the band leaving us without a drummer. Jeff immediately gave James a call to see if he was interested in trying out for us. James had been down to a few of our practices over the summer to check out what we sounded like as a 5 piece and he was stoked to start learning our songs. Right away he caught on, kept in time and literally flew through our songs. He was exactly what Endless Chaos needed on drums. We rehearsed with James for about 3 weeks before heading into the studio to record our EP ‘Rejected Atrocity’.

Why did you decide to name your EP Rejected Atrocity?

JD/EC: We decided to title our EP Rejected Atrocity because the song Rejected Atrocity is written about my favourite horror movie Re-Animator. That movie really captures where the band is going lyrically with more gore and horror themed lyrics.

You have been linking your songs from Rejected Atrocity on your social media sites. How has the response been so far?

JD/EC: Promoting Rejected Atrocity through social media has been incredible. It’s has become so easy for our songs to be heard around the world. In just a click you can hear any bands song through YouTube, BandCamp, Sound Cloud, etc. Sharing these songs through social media also allows us to track and see how many people have downloaded a song or listened to it. It’s amazing to see how it’s reached out with the help of Jon Asher from Asher Media he has been a huge help on promoting our EP through social media.

Which was the favourite to write/record/play on Rejected Atrocity?

MM/EC: I think collectively we can all agree that Rejected Atrocity is our favourite song to play in general. It’s fast, technical, heavy and the riffs are fun to play. It shows off a lot of diversity in our playing as a band not just limiting ourselves to just thrash metal or just death metal.

Any inspirations for the album?

JD/EC: I was inspired lyrically by a lot of older horror movies particularly Hellraiser and Reanimator and older death metal themes.

Do you think it’s hard for Canadian artists to get into the music scene? Especially your genre?

MM/EC: Yes and no, if a band has the right passion and motivation anything can happen. It is tougher in metal because it does have a smaller fan base in comparison to other genres of music. A lot of bands don’t realize that you need to invest a bit of money in your band and instead of keeping the beer fridge in the jam space full. Putting money aside for your band makes budgeting for studio time, merchandise and touring less stressful allowing you to focus more on writing and performing.

What is next for Endless Chaos?

MM/EC: Right now we are rehearsing and writing some new songs towards our full length. We plan on playing live as much as we can this year with a couple out of town shows and a mini tour. We are aiming to head back to the studio later this year to record a full-length album.

As usual, we like to ask some fun questions for the fans:

If you could set up your dream tour (with Canadian artists) who would you choose and why?

JD/EC: Gorguts, Untimely Demise, Auroch, and Dire Omen, they are some of Canada’s finest death metal and a lineup like that would be wicked to tour with.

Where would you tour if given the chance?

JD/EC: Europe, no questions asked. You can play so many cities in a short time unlike touring Canada where you’re driving for most of the tour

JD/EC: I don’t care for the term guilty pleasure but I love the Foo Fighters and Queens of the Stone Age.

Anything else you want to say to your fans?

MM/EC: We’re looking forward to playing shows and meeting new fans and getting our name out there for 2014. We can’t into the studio to record a full length late 2014 to follow up Rejected Atrocity!