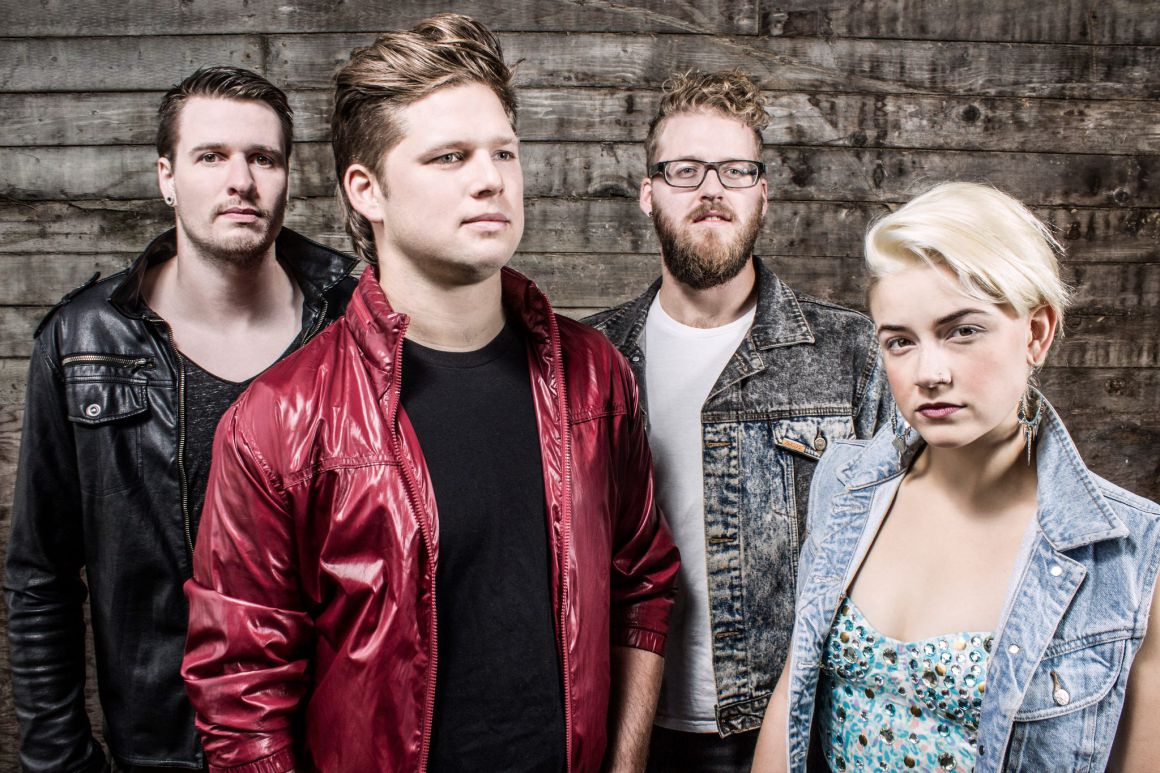 Cruel Young Heart is a Vancouver based pop/rock band that consists of 5 members, James Blackmon (Vocals), Drew Mckay (Guitar), Andrew Blackmon (Bass) Graeme Hahn (Drums) & Chelsea Lang (Synth). The band released their first single, “My Way” off of their upcoming album, set to be released this spring. Keep reading to find out more about this great Canadian band.

First of all, how did you come up with the name “Cruel Young Heart”?

James: It was while we we’re writing our first EP. I came up with a line that went “you’re a cruel young heart with a common disease”. During that time I was writing about how we had all thrown ourselves head first into this new band Cruel Young Heart, and how musicians usually find it hard to pinpoint exactly WHY they are willing to pursue music like rather than a secure job and a mortgage. We do this because we NEED TO. A common disease that musicians, artists and creators share. So when that line was written, “your a cruel young heart with a common disease” at the same time we took Cruel Young Heart as our name.

You released your debut EP in 2010, and also have a new album which is scheduled for release in early spring, how has your sound changed between these two releases?

Chelsea: The sound has matured quite a bit. We have three new committed members (Drew McKay – guitar/vocals Chelsea Laing – synth/vocals and Graeme Hahn – Drums) and with this we have been able to dilute the work load that was initially carried out solely by James and Andrew. With the new additions we have been able to take their creativity into the studio, and in writing, presenting several new angles and themes within our songwriting. We’ve also been experimenting with a dark 80’s sound, while maintaining the demand for a poppy upbeat rock ensemble.  In saying this, our sound WILL be more diverse while also introducing 4 capable vocalists to have LIVE harmonies and gang vocals. The individual characters of our new members and old members contribute to one unified group of skill, musicianship, and the unanimous goal: to present the past in a futuristic soundscape that will contain and illustrate our individual uniqueness! We’re all SO excited to show you what we’ve come up with for the new album!

The first single, “My Way”off of your new album has been released, can fans expect the rest of the album to follow suit with the same infectious sound?

CYH: SURE CAN! Thematically, some things may feel different, but it’s still Cruel Young Heart. It just keeps getting better and better!

When writing songs, where do you tend to draw inspiration from?

James: It’s usually about the things we see. A while ago we were talking a lot about life in space. Before that we wrote a song about a boy who sells roses on the street. “My Way” is about not being willing to compromise, and how that can leave you lonely and alone at night. We get also get inspired by other artists and people who have nothing to do with our genre of music or style. It’s odd I know, but it works.

What can you tell us about the behind the scenes work on the album?

James: Well, to be honest not much of it is really behind the scenes these days. We keep the doors wide open. Gone are the days when artists work on their project in secret. We’re always posting tweeting and leaking footage when we’re in the studio working on our tunes. It’s a lot of fun including the world in our writing process. And people are just as interested the process as the final product. So stop by any time, we’re home!

I hear you are working with a couple of members from These Kids Wear Crowns, how’s that going?

Andrew: It’s been a lot of fun. I actually live in a house with Josh and Gypsy from TKWC and a few other people. The basement looked something like something out of a horror movie so a bunch of us decided to knock out a few walls and build a little studio. When it was finished we all celebrated with a bottle of champagne and named our new creative space “Z”. Now it’s where members of both bands have been working on their new songs, as well as anyone else who wants to come down to ‘ze studio’ and hang out.

When can fans expect to see Cruel Young Heart on tour?

CYH: Spring/Summer of 2014! We’re going to try to do a Westcoast tour after hitting as many Canadian cities as we could this summer. It will be amazing to head south and into the States; it’ll be a completely different vibe, and will allow us to make new fans and friends! We all can’t wait, last tour was a trip of a lifetime.

Speaking of touring, if you could choose anyone to tour with, who would you choose?

CYH: This was a tricky one to answer – seeing as everyone had different ideas.

Canadian Beats is all about Canadian music, so I have to ask who your favourite Canadian bands/ artists are?

CYH: Sugar Jones, Robert Bateman, These Kids Wear Crowns (ha ha ha), A Trophy Life, Alanis Morrisette, Jumbo (ok, so there’s a side story to Jumbo – we played a gig with them in Saskatoon and we were BLOWN AWAY. They are a mix between the Black Keys and some progressive bluesy type rock. The drummer is also the lead singer, and their unconventional set up have people in awe. They make you want to party harder than you can imagine. THEY ARE RAD.)

Let’s do some THIS OR THAT:

Chelsea – Vanilla with a swirl of chocolate (I don’t discriminate)

Graeme – Dogs. Cats are literally made of contempt.

Chelsea – Dogs, DUH (unless its a tabby; meow)

Graeme – Vinyl is my jam

Chelsea – …spin me a record, baby.

CYH: Thanks for starting Cruel Young Heart and letting the five of us join, it’s nicest thing you could have done to us.