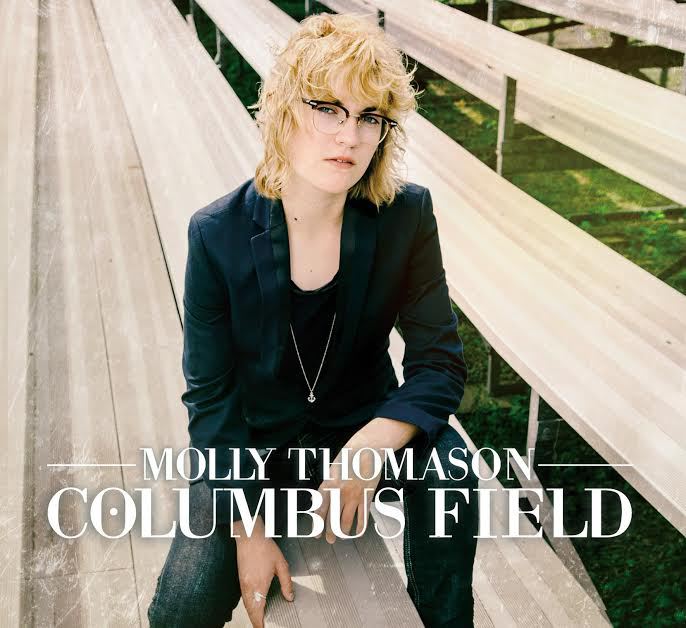 Molly Thomason is a Nova Scotia born, Toronto based singer-songwriter. She has recently released her 4th album, “Columbus Field” and if you want to know more about that, be sure to check out our review of the album: http://canadianbeats.wordpress.com/2014/02/04/review-molly-thomason/

I’m sure you are interested to find out more about this talented young artist, and you’re in luck as I was fortunate enough to conduct an email interview with Molly.

Let’s start with a bit of background, when did you first get into music?

MT: I was always surrounded by music growing up. My parents are both in the theatre; my mom has been involved with a lot of musical theatre and taught piano when she was younger, and my dad loves to play guitar and sing so that was around. My uncle has also always been heavily involved in music as an opera singer, musical theatre actor and director, choir director, composer. All the good stuff. He was my music teacher in elementary school!

Your new album, “Columbus Field” is available on February 4, but this isn’t your first album, how has your sound changed from your previous releases to this one?

MT: I think Columbus Field is a much more cohesive album than anything I’ve ever released. It has a very decided rock ‘n roll sound. I think the other albums lacked that focus, and this time around I’ve really figured out what I want to come across to listeners and how I wanted the songs to be approached production wise.

You worked with John – Angus Macdonald from The Trews, what was that like?

MT: Working with John-Angus was so  fun! I learned so much for him and had a great time. He is fantastic in the studio, he never gets cranky and he is always thinking of ways to make the production interesting and unique. He really listened to me and got what I was going for and believed in me. I can’t say enough good about him. We’ve kept in touch outside making the record and he is one of the best mentors I could ask for in the Toronto music scene. He is so generous.

Speaking of working with other artists, who would you love to work with in the future?

MT: I would love to work with Joan Jett. I’m obsessed with her and the Runaways at the moment and I think it would just be so cool even to have a coffee with her and pick her brain. It’s also my dream to do a record with “Jack Frost” (Bob Dylan) producing. I have a bunch of more chill songs that I think would totally suit his production style. I’d also love to tour with the Killers. I’ve listened to them since the beginning and got to see them play the ACC last spring…It was fantastic and if I ever got to share the bill with them it would be a dream come true.

What is it like to be in the music industry at the age of 19, do you find your age creates any obstacles when attempting to make it in your chosen career path?

MT: I find it just keeps getting better. I think maybe it was harder when I was 14-15-16, but the older you get it gets easier, although I don’t think I ever had such a hard time even at 14. I think maybe if I hadn’t started so young I might have a different opinion, but because I’ve been lucky enough to have theses years behind me, people know that I’m approaching things with a little more experience than one might expect. Mostly I find being young an advantage and a nice challenge. It’s fun to try and surprise people who might be doubtful because of my age.

Your sound has been compared to other strong female Canadian acts, such as Tegan and Sara, how does that make you feel?

MT: It’s an honour. I love Tegan and Sara and I could have a career anything close to theirs I’d be more than happy.

Who has been your biggest influences in the music industry?

MT: It’s hard to say. I have a lot of mentors. I think my manager Sheri Jones, people like John-Angus and all the Trews and Cone McCaslin, a great music supervisor called Michael Perlmutter. They’ve all helped me figure out the ropes over the past few years and I’m so grateful to them. Without people like that it’s very easy to get lost and forgotten in the music industry, especially in a big city like Toronto.

You have received multiple nominations for the Music Nova Scotia and East Coast Music awards, can you describe that feeling?

MT: It’s always really exciting! Especially because whenever I’ve been nominated I’m nominated alongside artists whose work I love and listen to in my own life. It’s really special to see your name in the same ranks as people you respect and are rooting for.

Let’s get back to the release of “Columbus Field”, what can you tell your fans about the writing process on the album?

MT: Columbus Field was written during my high school years in Antigonish, Nova Scotia. I tell people that listening to the record is basically like reading my diary between the ages 14-18. Some of the songs were written at the very beginning of high school and were around even when the first record came out, and some were written when we’d already recorded two or three tracks for Columbus Field. They all come from a really raw, honest place, straight from the horses mouth. I really hope that people who are in/grew up in high schools in small towns find themselves in this album because that’s the life this is a tribute to.

You are performing at the Drake Underground in Toronto on the release day, for those fans that can’t make it to that show, when can they see you? Do you have any more tour dates in the near future?

MT: For sure! I have a residency at C’est What in Toronto every Tuesday in February starting on the 11th from 9-11pm. And then I have a sweaty, full band rock ‘n roll show opening for Garage Baby at the Press Club in Toronto on February 28th. I’ll also be doing album releases in Nova Scotia in Halifax on February 13th and Antigonish on February 15th!

Here at Canadian Beats, we always like to include a segment of “fun” questions, so to begin, what was the first album you ever purchased?

If you were to put together a festival lineup, who would you include to play the show with you?

Think back to the first song you ever performed live, what was it?

MT: Haha Lips of An Angel by Hinder. My middle school music teacher put together a rock band…

Who was your idol when you were growing up?

MT: Avril Lavgine all the way.

If you had to choose one word to describe your sound, what word would you choose?

We all have our “favourites”, so let’s find out some of yours, what is your favourite season?

MT: That time right around where summer turns into fall..It’s not crazy hot, and it’s not too cold and you can wear all your favourite clothes and not sweat too much and feel gross.

MT: Does Hermione Granger count as a super hero?

Favourite movie of all time?

MT: Either Mean Girls or The Runaways. Those ones never get old!

MT: “You can’t be wise and in love at the same time” – Bob Dylan

MT: Ouu I love this recipe that’s like chicken breasts marinated in olive oil, balsamic vinegar, and herbs, then BBQed and served on arugula with blue cheese on top. Yummmmm!

Favourite concert you ever attended?

MT: I opened for Joel Plaskett and the Emergency Band at the University of New Brunswick recently and that concert was amazing. I think I still have whiplash from rocking out. His guitar playing is so cool. Watching him on stage I just kept thinking “Okay. How can I get as good as him.”

MT: Just thank you so much!! It’s strange to think that I have “fans” haha but I am so happy that people are getting into the music, coming out to shows, listening and being interested in what I have to say. Music is all about connection, any time someone tells me they’ve been touched by my songs it means the world.