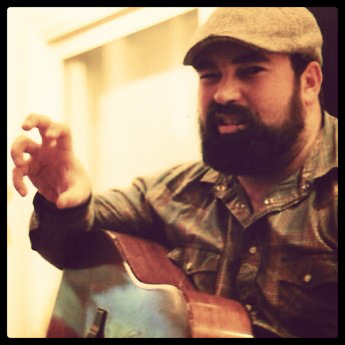 Eric Conlon has been the front man and primary songwriter for Niagara touring acts, Journey to Aspen and Lambs Become Lions, but has recently decided to pursue his dream of being a country musician. His debut solo album is set to be released in Spring of 2014. Eric has volunteered with organizations such as Big Brothers and various other charities throughout his life, most recently he has decided to join Bands Fur Animals, which you can learn more about here: http://www.bandsfuranimals.ca/

I was given a chance to conduct an email interview with Eric, so to find out more about this up and coming country artist, keep reading.

When did you realize you wanted to pursue music as a career?

EC: I, realistically, always loved music. I started playing guitar when I was 10 but I didn’t actively start pursuing a career in music until after university. That’s ironic, isn’t it? I could have gone to university for music but I thought, “nah, no way, you can’t make a living playing music”, and now all I wanna do is play and write music.

How has your style changed through your musical journey?

EC: My style has changed a great deal over the last 6 or 7 years of playing in touring bands. My first real effort was a pop punk band called “Journey to Aspen”. We played that very post fall out boy kind of pop punk, and we tried to be heavier than we were:P then my musical tastes developed a little more with “Lambs Become Lions” and i started playing pop/piano rock type music. I loved the ability to play dynamics in that style and it was truly a gateway to playing pop country which is the leg of the journey I’m on currently. I would say that although the styles have changed over the years, that the idea of wanting to tell a story and not just write bubblegum songs about nothing has always stuck with me.

I read that you fell in love with country at a young age, who was your inspiration?

EC: I spent countless summer’s driving to Grundy Lake Provincial park. The soundtrack was always 4 tapes: The Rankin Family’s ‘North Country’, Weird Al Yankovic’s ‘Alapalooza’, and both ‘Ropin’ the Wind’ and ‘No Fences’ by Garth Brooks. I didn’t know it then but I would say that Garth Brooks really spurred (pardon the pun) my love of story telling music. He was incredible at honky tonk, but no one ever played better ballads. To think, an artist could go from a song like “mama’s in the graveyard, Papa’s in the pen’ to a song like “the dance”. Because of the role it played in my life and the memories I have of those summers, Garth Brooks and country music as a whole, have always been a great love of mine.

You are set to release your debut solo album in Spring of 2014, what can fans expect?

EC: I’m really shooting for a lot with this EP. I mean, I’ve been having a blast recording it with Adam Newcomb at Newcomb Studios (who you need to work withwww.newcombstudios.ca), but we both have high expectations for the results of this album. These songs are mostly introspective, and they are all true stories. I guess you should just expect integrity and honesty, and to know a lot more about me when you’re done listening.

What inspires you when writing songs?

EC: Everything is inspiring. I love retelling movie stories or stories from my own life in my songs. I think really, it is people and their actions that inspire me most. I wrote a song on this album about my dad’s parents. They were only married for 6 months when World War II happened and my grandfather volunteered. He was overseas for five years and all they had to carry on their romance was letters they would send back and forth… for five years?! I felt like it was just a story I needed to tell and titled the song: “Letters Home”.

You volunteer with many organizations, such as Big Brothers and Bands Fur Animals, what made you get involved in these organizations?

EC: I guess I just like people and I’ve always wanted to help people. I always tried to get my bands involved in charity work but it just never seemed to fly because as a band, it feels like any time you miss an opportunity to make money, it’s a mistake. I joined Big Brothers because I always wanted a little brother. I really enjoy connecting with kids and in another life I would have definitely loved to be a teacher. Bands Fur Animals is just a great opportunity for me to use my passion to help out in the community.

Speaking of Bands Fur Animals, do you have any pets? If so, what are they and of course, what are their names?

EC: My parents have a west highland terrier named Monty, what a cute little dog:D he suffers from cataracts so he’s blind. He’s also diabetic. But every time I walk into their house, he’s there wagging his tail at me. If that dog can still find joy in life I really have nothing to complain about. Then my girlfriend and I have a rescued dog we got from the Lincoln County Humane Society named Piper. She’s young, and she’s a handful, but she’s so much fun.

EC: CARDINALS!!!!! seriously, do yourselves a favor and check them out. I’ve been loving Autumn Hill too, they are a Toronto based country duo. There’s so much awesome music out there in your local community. Go to bars and venues and see what’s out there, you never know what you’re missing.

We always like to include a little “fun” portion to our interviews, so how about we do a THIS OR THAT?

EC: Facebook. seriously, I can’t keep up with tweeting. I also have no privacy settings on Facebook, so feel free to creep away:P I just enjoy the ability to create groups and it’s easy to communicate. Also, you rarely get people on Facebook who make 20 posts in a row, thus overcrowding your newsfeed, making you miss what you actually want to see… *ahem tweeters*

EC: Dogs, my whole life it’s been dogs. I’m warming up to cats, but until they can play fetch or don’t make me jealous of how much they get to sleep, they will always be #2.

Video games or board games?

EC: I’ve always played video games. Sports games and first person shooters are my poison. That said… I have a rather extensive board game collection. Either way, if you think of me in a good light, it’s best not to play either with me. I’m what you call a “competitor” 😛

EC: Coffee has become a way of life. Oh man, and when you get spoiled with good coffee and you have to stop at some other coffee shop… the disappointment of a bad cup is almost insurmountable #firstworldproblems

EC:I’m definitely a morning person. I pass out sitting up in a crowded room if i’m tired. I like the idea that every new day has some challenge waiting for me.

Eat In or Take Out?

EC: I’m a home body definitely. I like cooking though. I think the best dates are just picking a recipe and making something together.

EC: To the people reading this, even if you think my music is crap (which it very well could be) go out and find something you love because there is a whole world of amazing music out there. Music can be the most unbelievable soundtrack to our lives. Just go out and find something you love and listen to it til it’s a part of you. Thanks for reading 🙂