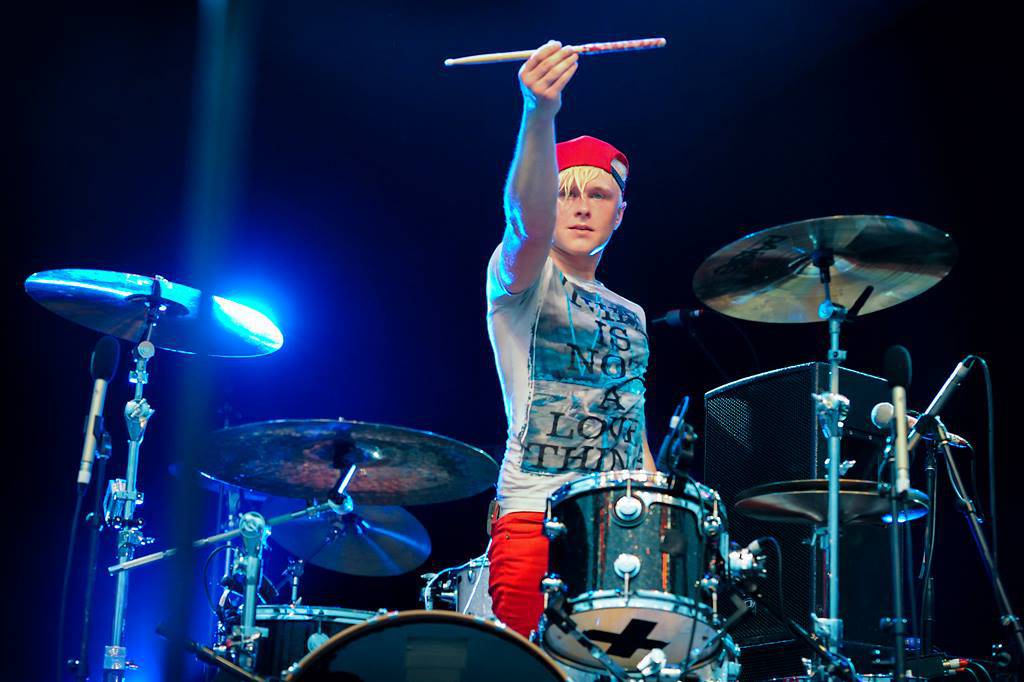 Seamus O’Neill, drummer of popular BC band Faber Drive, is the newest member to the lineup but definitely does not disappoint. With his high energy live performances, happy-go-lucky personality, and the way he connects with his fans, Seamus was welcomed with open arms by the fans of Faber Drive. He joined the band shortly before LIPTOUR 2012, which took the band on a tour from coast to coast, hitting every province along the way.

But what else do you know about Seamus? Do you want to know more? Of course you do! With so many requests we have received for an interview with Seamus, a few members of the Canadian Beats team put together some questions so we can all get to know Seamus a bit better.

Other than Faber Drive songs, what is your favourite song to play on the drums?
SO: Oh this is a good one! I would have to say paradise city by Guns n Roses! It’s the first song I ever taught myself to play and lemme tell you! I played that song over and over and over and over again. My poor neighbours must have hated me!

What has been the craziest fan encounter that you have experienced up until now?
SO: Well there have been some good ones and it honestly is so amazing and makes me grin from ear to ear some of the things fans will make for you, bring to you, and say to you to make you feel so special. I’d say the hugest though was someone got a life size cardboard stand up cutout of me made and I thought it was so rad! I was flattered beyond belief. I wish I got a picture standing beside it.

What would be the best “fan made gift” that you could receive?
SO: I seriously blush every time I receive something from a fan. Like I said it amazes me and makes my day so much better when someone actually goes out of their way to make you something. My favourite so far would have to be the custom cellphone case a received last Christmas. It was so awesome! It had the FD symbol on it with my name too! I think there’s a pic of it on my Instagram somewhere.

If you were able to fill in for any drummer for a day, which would you choose?
SO: Have I told you that these question are awesome?! I love it! This is so tough as I can think of over 1000 that I would love to fill in for! …..I’m naming three just cause!!!! here we go…..Journey! The Foo Fighters! and Hedley!

What made you get into drumming?
SO: I was so into drumming since day one. Apparently before I could even walk or talk I would sit in my car seat and air drum along to my moms music while we were driving. I probably didn’t know what  I was doing yet but I sure loved doing it! When I was about 12 I had a  friend who’s  Dad was a drummer and every time I was over at his house I would eye his kit up like the hottest girl I had ever seen! For my 13th birthday he gave me four free lessons and taught me the very basics of what I needed to teach myself the rest. I was hooked from then on and never stopped. It’s funny as I don’t think he realized what a great gift that was and if he’s reading this…..THANKS WAYNE!

Do you have any hidden talents?
SO: Before I got so into music I was obsessed with dance! Mainly breakdancing and I’d like to think I got pretty good at it. I even won a school talent show doing it. I’d practice for hours upon hours making every move just right. I also was signed to an acting agency for a bit and got some good spots! Maybe one day I’ll get famous enough to make a Seamus movie……definitely a comedy!

What’s the first thing you do when you get back from touring?
SO: The first thing I do when I get from touring is usually dive into my bed, order a nice big pizza and put on a good movie for some quiet time. Then the next day I call up all my friends and family and start making plans to hang out with them as I miss them all dearly when I’m on the road!

What is your most memorable fan encounter so far?
SO: Aw just scanning all the great memories in my mind brings a smile across my mug! The best one was on tour with my first band. We we’re in LA playing a show when a young 10 year old girl came up to me with the biggest smile on her face. She was so excited to meet the band and I soon found out while speaking with her mom that the little girl had cancer and that she most likely wasn’t going to live much longer. The fact that this young girl was so strong and positive while having something so awful and was so excited just to give me a big hug and talk to me made my day. I couldn’t believe that I could do that for someone. It was the ultimate payoff and I felt like gold knowing I could make someone else happy. The only thing that kills me is I couldn’t spend more time with her and her mom as we had to leave so quickly and it was out of my hands. It truly brought tears to my eyes knowing what the poor young girl was going through. I would have hung out with her for hours longer if I could have.

Can you give us any hints on what Faber Drive is doing in the studio?
SO: Writing and recording new tunes!!!! Let me tell I am so stoked for you guys to hear them. I am so excited!

If you were in charge of making a weekend festival, who would be on the lineup?
SO: Oh my my (rubs hands together) here we go! Led Zeppelin would be the headliners for sure. We would have Journey, The Foo Fighters, Linkin Park, Greenday, Simple Plan, Motley Crue, Hedley, Mariannas Trench, Fall Out Boy, My Chemical Romance, Backstreet Boys, Justin Timberlake, Eminem, Keith Urban, The Used, Aerosmith, Aaron Pritchett and of course Faber Drive so I could get up there and rock out on the same stage as my heroes! Who am I kidding there would be so many more!

What do you think your most played song on your iPod is?
SO: It always changes but right now its Alone Together by Fall Out Boy. That song is so darn catchy it just gets me stoked every time!

Are there any Canadian bands/artists you would recommend to your fans?
SO: oh yes! Aaron Pritchett, Hedley, By Starlight, Courage My Love and bunches more!!! I suggest just go on a Canadian bands hunt! You won’t regret it!

Were you nervous at all for the reaction of the Faber Drive fans when you first joined the band?
SO: Oh I’ll admit it I was terrified! I felt like the new kid at a really really massive high school dance! I knew how awesome and dedicated the drivers were and with that in mind all I could think is “do you think they’re gonna like me?” “If they don’t then they’re really not gonna like me!!” Then a peed my pants a little slapped myself and got pumped! I was so excited to me best at making friends with all of them!

Have you always known that you wanted to do something with music?
SO: I think so! I was always so obsessed with the sounds of any instrument but it really came to me when I started playing! I actually wanted to be a fireman when I was little!

And finally, do you have anything you’d like to say to your fans?
SO:  Thank you thank you thank you!! I know thank you isn’t enough but I could say it till I’m blue in the face and still not be done. I cannot express enough how much the fans dedication and devotion means. From the amazing social media posts I see on sites such as twitter, Facebook and Instagram to the radio requests and not to mention the beautiful gifts we all receive in the mail. I appreciate every bit of it and the joy it brings me has even gotten me through a lot of hard personal times. So again! Thank you guys! I love all of you:) We’ll see you soon!

Keep up with Seamus on social media below!