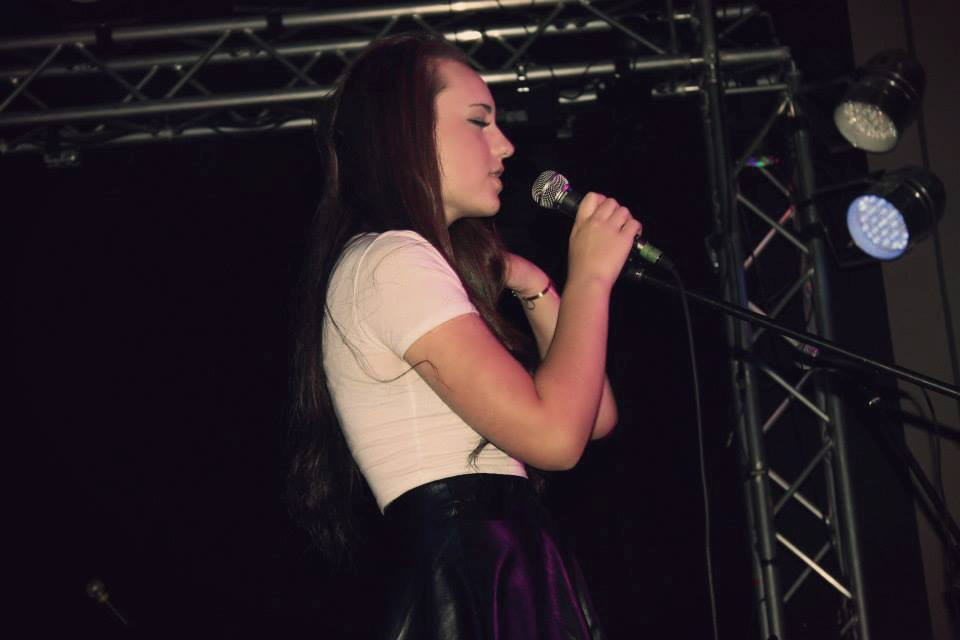 Miranda English is a young pop punk artist from Vancouver, BC. In the summer of 2013, she toured parts of Canada with Kieran Strange, and another Vancouver band, Alexander France. She’s an up and comer that you are going to want to keep an eye out for, so continue reading to find out more.

When did you decide that you wanted to pursue music?

ME: Well, around my young years 8-10 it was one of the thing that made me the happiest and was one of my favourite things to do in my spare time. Thats when I knew it was right for me. Now music to me is a dream that just keeps on growing and getting better by each moment. I love it, and I will to the end.

Were there any obstacles that you had to face being so young starting out in the music scene?

ME: I actually face a really stupid amount. It seems like little problems from other peoples perspective, but I don’t think they understand how much it can effect someone. I get judged a lot, but that’s easy for me to brush off. I am who I am and I love who I represent. Making the transition from being on the other side of the stage, to being on the stage was a huge deal to some. Most didn’t believe I had a talent or thought it was just some joke, and then came the drama. This is my dream, and I want support. I don`t want people to hate me for who they think I am, when they don`t know who I am.  Being said, I get hated on in huge amounts, harrassed, judged, lied to, lead on, all of that. More on the obstacle side though it`s really hard to find band members, and play local bar shows. It’s very hard doing this but it is what i love.

I was browsing your youtube and saw a few covers that you have done, what has been your favourite song to cover?

ME: Honestly, Kim Possible theme song. It was so fun to learn.

When can your fans expect an EP or album from you?

ME: Without a doubt I am going to be releasing my full bands EP before the end of 2014.

You have toured with Kieran Strange and Alexander France, who else would you love to tour with?

ME: I think the next few bands i’m looking to tour with would probably be some bigger bands with some local. Some local bands I’ve watched grow and wanted to tour with for a long time are Fighting For Ithaca, This Side of Town and Faber Drive. All three have become some of my close friends and I have an endless amount of love and support for them. Also, this band that I recently saw play a show in the local scene amazes me. They are called Dear Adeline and i instantly fell in love when I saw them live, they are amazing guys.

Where in the world would you love to tour?

ME: LA! I am working on organizing a tour in the states for either summer or early 2015!

Canadian Beats is all about Canadian music, so I have to ask who your favourite Canadian bands/ artists are?

ME: I’ll list a few then put there location beside.

This Side of Town- Vancouver/BC

Here at Canadian Beats we always like to include a little “fun” segment to the interviews, so here are a few questions that your fans might not know about you.

ME: HILLARY DUFF! That girl was one of my biggest inspiration when I was little.

If you could choose one person to collaborate on a song with, who would you choose?

ME: Hayley Williams of Paramore, OR Josh Ramsay. Both are amazing writers, musicians and have outstanding personality’s

What would your perfect day of relaxation consist of?

ME: Laying in bed, drinking tea, and watching movies!

ME: Misery Buisness – Paramore or Neon Lights- Demi Lovato both know how to change my mood.

If you had to choose your favourite music video of all time, which would you choose?

ME: Oh boy this one is a hard one. I am realllllyy in love with a lot of Paramores videos. I’d have to pick a top three! It’s either their videos for:

Last, but certainly not least, is there anything you’d like to say to your fans?

ME: Thank you for always picking me up when I am at my lowest point. It’s you guys that keep me going, and its you guys that keep me here. I always think its amazing to know that I have saved a few of your lives, and also its so crazy that I have fans in different continents! Shoutout to those of you that have said you are some of my hugest fans from Egypt, France, and LA. It puts a smile on my face every single day. Also a special thanks to my local  street team #TeamEnglish you guys are doing an amazing job. New music, and covers will be coming out within the next month!