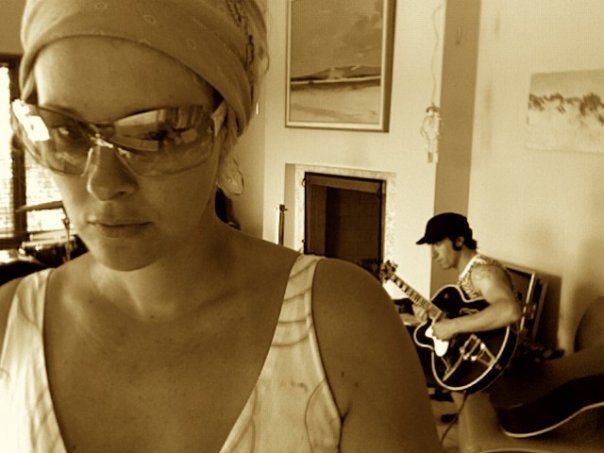 LOAD is an ambient pop/ alternative band from Winnipeg. The band is made up of Luce (Vocals), Avi-G (Bass) and Johnny Stewart (Guitar, Programming). The band is set to release their latest album, “It’s True” on February 11. Be sure to keep an eye out on Canadian Beats for our review, but for now, it’s time to learn more about the band since I was able to conduct a virtual interview.

First of all, how did you choose the name, “LOAD”?

LOAD: After a long night of rehearsing and heavy duty balling with Jackie Rogers Jr and SCTV.

LOAD: Originally we came together with Jason Tait (previously from Red Fisher, went on to form The Weakerthans) as a pseudo Blondie cover band.  Yvhan (LOAD’s original and contributing guitar player / song writer) and I just one day wrote a song together called Cold after acoustically dissecting a Jane’s Addiction song called Summertime Rolls. Suddenly we had a little fever to write more songs and as fate would have it we met Avi-G (Stefan Gislason) who was a stand-up bass player (and stand up guy!). We had some real magic as a group and wrote our first album together but Jason left the band shortly before recording it.  The bar had been set really high for us by Jason and from that moment on we put huge pressure on our drummers to perform in a LOAD / Tait-esque way. So needless to say LOAD became the Spinal Tap of Winnipeg as far as drummers were concerned (I think we adopted and destroyed about 10 drummers to be exact).  The drummer that recorded our second CD with us never made it to tour and Anthony Maki took his place.  Yvhan, Luce and Avi became the driving force and writing team and LOAD continued on that way until 2000.

Giving birth to two children during the release of Encoded and touring wasn’t easy.  We were on a high of lots of hype and success, SxSW, touring and back and forth to NY a few times, press that was so uplifting, but it was too much. Even though up until that time it seemed we could all have our cake and eat it to, it became difficult to balance it all.

Inevitably we took a break.  In that time we all grew to an extent, and made shifts and changes in our lives.  I, with two children, found myself a single mom and entrepreneur working hard to raise my children and run my business. Yvhan went back to University and became an architect, most recently working on the Human Rights Museum in Winnipeg. Avi got married and also went back to school, moved to Israel for a year in a very strife filled time. When he got back, even though we were living apart, Avi in Toronto and me in Winnipeg and Mexico, we never grew apart … and we never stopped writing either.  We were sending each other crazy samples and song ideas and even though they never resulted in anything complete, we were actually laying the groundwork for the new album.

Don’t ask me how because it wasn’t planned (except by the gods), my old friend Johhny Stewart was in town.  I had asked him the year earlier about doing something musically but he was doing his own really cool project called Mico and I was now listening to some of his tracks.  There was an instrumental song on it, called Clock Radio  … I instantly fell in love with it, sat down on the living room floor in front of my kids, told everyone to be quiet and wrote Circus Song.  I performed it with him as Mico and the rest, they say, is history.  It’s True.

You previously released two albums, but then went on a several year hiatus, what was it like coming back after being away? What had changed in the music industry?

LOAD: Besides technology and the way people stream and buy music, not a lot has changed.  To be honest we were much more frustrated with the industry 10 years ago more so than now.  Either we just understand what to expect better as we are more seasoned or we are fortunate enough to work with some really stellar people now – I mean Jimmy Barr from Portishead … Dale Wallace from Emerson Drive …. Chris Burke-Gaffney from The Pumps and Orphan – my two best friends – who can complain??? We love that people feel we are “back”.  It means we left an impression.  Yes!

You are releasing your new album, “It’s True” on February 11, what can you tell the fans about the album?

LOAD: We hope they listen from start to finish and play it fucking loud – it’s some dreamy trippy edgy orchestration with big balls, deep dynamics and even bigger heart (in fact Johnny Stewart’s heart beat is looped through one of the tunes).

How has your sound changed between your first two albums, and “It’s True”?

LOAD: With Tait’s and Yvhan’s  influence in the beginning we stayed a more alternative jazz punk band .. in time and evolution we used electronics to provide the kinds of sounds we were used to from Tait and that led to us including other players a lot … bringing their influences and talents to the table to add to and compliment the LOAD trio.  There is no stand up bass on the new album and I took a larger role in dreamy trippy back ground vocals that I am really pleased with but LOAD at it’s core has not changed – you can tell a LOAD song a mile away, from then until now – nothing sounds the same, but it definitely sounds like LOAD. No doubt about it.

LOAD: I don’t know.  Real life, poetry of the divine, a scent … a tragedy … a triumph.  Pride.  Embarrassment.  Another great song we wished we would have written.

You had a nomination from Prairie Music Awards for “Performer of the Year”, and you were also the first band from Manitoba to be invited to play at the SxSW music festival in Austin, Texas.  Those are both great accomplishments, how does it feel to be recognized for your music, both in Canada and outside of Canada?

LOAD: We were treated as special as the gods in Austin for SxSW – none of us will ever forget that experience because we stayed 2 extra days and drove 30 hours straight home afterwards in order to do so – we never wanted to leave.  The show, the fans, the industry, the interviews … all were magical and so special. The articles done in the Austin City newspapers and the Winnipeg papers really propped us up then , made us real contenders against the infamous Crash Test Dummies and Wide Mouth Mason – we all of course thought the Dummies would win that year and were surprised and elated for Wide Mouth Mason.  The ceremony has kept us going through our down time.

If you were asked to describe your sound in one word, which word would you choose?

Canadian Beats is all about Canadian music. Please tell us who your favourite Canadian bands/ artists are?

Who has been the biggest influence for you as a band?

LOAD: The only answer I could say for certain is Jane’s Addiction and God – positive or negative, in each of our struggles, in each of our lives, we have each embraced our own mortality and faced choices of life and death and have had to pick up pieces and carry on – Whether it was Avi’s stint in Israel, when I broke my neck or Johnny surviving a life threatening illness during the making of It’s True, we have all faced our maker and discovered what truly matters to each of us … which is really fucking great effects pedals and a microphone.

We always like to include a “fun” portion to the interviews, to give the fans a chance to get to know more about you.

What if your first musical memory?

LOAD: My dad buying me a portable eight-track player and a double set of Frankie Valli and The 4 Seasons, “Big Girls Don’t Cry”.  Then the next one was my babysitter buying me a Beach Boys album with Good Vibrations and 409 on it, which quickly snowballed into AC/DC, Queen, Blondie and Pink Floyd.

LOAD: Thinking Of You Down In Mexico by Canadian Edward Bear, War In The East by DOA, anything by the Gorillaz or anything off of OK Computer (Radiohead) .

If you were going to be on any reality show, which would you choose?

LOAD:  I would have to create my own: I’m a feng shui master and medicinal plant expert ….it is my dream to have a show where I’m brought to a home where a family is in trouble – maybe it’s the relationships, maybe there is illness, maybe it is money issues…I won’t know but I come into their home and decipher what the hell is going on based on the feng shui horrors I discover.  Then based on implementing proper feng shui principles and alignments, see how the family recovers.

If you were able to ask your favourite band/ artist one question, what would the question be?

LOAD: Dead artist: Elvis – what the fuck happened???? Alive: I would ask Neil Young if he would help me start a solar and electric car dealership in Winnipeg.

If you could only play one song for the rest of time, which song would you choose?

And last but not least, do you have anything you’d like to say to your fans?

LOAD:  We are excited for you to give us this chance – some of you are really new to LOAD but many have been with us since the very beginning … we never really went away, like you we’ve just been working hard, keeping our chins up, making our way step by step  – this is our story of betrayal and triumph … We are so glad to be thought of as “back” ….. It’s all true.