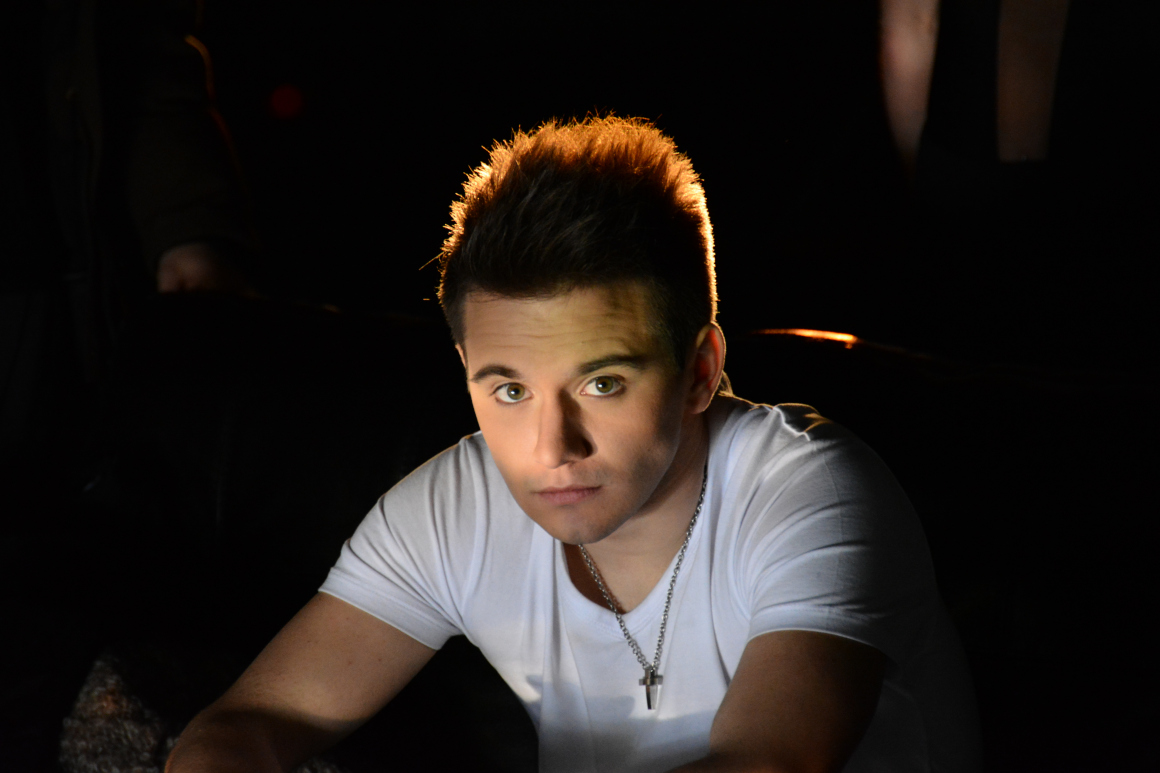 Jaden Chase is a 21 year old, Canadian born pop singer/songwriter from Montreal. Jaden has had a passion for music his whole life; from the first moment he picked up a guitar at the young age of twelve. In high school, Jaden started practicing singing whenever he had the chance. It didn’t take long for his talents to become recognized. Jaden was chosen to write and perform a song for the closing ceremonies for his 2009 graduating class at CheneBlue High School in Pincourt, Quebec. He got a standing ovation for that performance from a crowd of 2500 people, and at that moment his parents realized he was meant for a career in music.

Jaden continued to perform in musicals, variety shows and any other production that was available to him while he attended John Abbott College. The real fun began shortly after his college graduation. This is when Anthony Boccardi, head producer and partner at Studio One Records, discovered his talent. Boccardi introduced Jaden’s music to Ari Tietolman, president of the record label, and Jaden was quickly signed to a 5-year recording and management contract with Studio One in early 2012.

Jaden has a lot in the works, and you should be excited. Jaden’s first official single was released on January 13th. “Level Up” has already become a favorite to many fans across North America. On top of that, the entire Studio One team is now working on a series of music videos, webisodes, and also planning a Canadian radio promo tour, scheduled to rollout this Spring, followed by a full North American tour for the fall of 2014.

As if that wasn’t enough to get you all excited, there’s more. Jaden is currently working on a full-length album that will include songs co-produced by some of the best producers out there, including DJ Producer Duo, Paris & Simo, whose names have been seen on the Beatport top 40 charts many times throughout 2013. You will also find tracks that are co-produced by Davey Badiuk, who recieved a 2013 Juno nomination for his work on Dragonette’s album, along with tracks mixed by Greg Keely, who is most recognized for his work with Coldplay and Sarah Maclachin.

Now, you know you want more, so keep reading because we were lucky enough to score an email interview with this up and coming Canadian pop artist!

JC: I was in grade 9 when my friends and I entered our first talent show. We rehearsed for weeks, and performed “Wonderwall” by Oasis that night. We were the last ones to perform and I could see that the audience was getting tired, I was so nervous! But people really liked it, It’s like if we had brought the crowd back to life. The feeling that it gave me was amazing. That’s when I really got into music and knew I had to get more involved.

You released your single, “Level Up” on January 13, how have the fan reactions been?

JC: The fans are great!!! I interact with them daily on Facebook and Twitter, and they seem to really love the track. I have people writing positive comments daily, and I’ve been getting a ton of private messages that really motivate me to keep working! I’ve been getting tremendous support from my close friends and family as well! It feels good to know that everybody appreciates my hard work.

I won’t lie, I’ve had a couple hate messages as well, but I take it with a grain of salt. The one thing that they hate is seeing you smile instead of attacking back, so I don’t let it get to me!

You have other singles in production, as well as an EP release coming in February, and a full album in the works, what can you tell us about this?

JC: Yes, my EP is coming out on Valentine’s Day!!! I’m excited because my fans will be able to listen to different variations of “Level Up”. It’s going to include the original song, a French adaptation, and an acoustic version as well. I can’t really talk about the full album yet, but I can say that it is going to be different, and diverse!!!

Since we are on the subject of your EP release, will there be an EP release party? If so, can you tell us more about that?

JC: Right now, it’s all about songwriting, studio time and interviews, I honestly haven’t had the time to think about an EP release party. But if there is going to be one, you’re invited!!!

So far, what has been the highlight of your music career?

JC: The highlight of my music career would be signing to Studio One Records. I have a great team backing me up, and I can honestly say I probably wouldn’t have come this far without them.

I’ve developed a great friendship with Ari Tietolman, who is the president at Studio One, and he literally grew up in production studios and radio stations most of his life. He has an amazing ear for quality beats, and his creative flair for promotional planning is unbelievable. The guy is a true marketing guru, and I am grateful to be working so closely with him on this project.

Anthony Boccardi who started as my production manager at Studio One, is now one of my best friends. Not one day passes by without a phone call from him. Communication is key in any relationship, and we’ve reached a point where I can talk to him about just about anything and everything. He is really amazing at what he does.

And then there’s good old Ben Shulman on the team, he is my co-writer and close friend as well. We have a blast in every writing session, and I’m always looking forward to the next.

There is also Royce Groome who runs a tight ship keeps the administration together, and he’s an amazing DJ as well. Royce takes care of all important back end operations with Mike B. who runs the Los Angeles offices of Studio One as well, and I can’t wait to meet him when I start touring the states. This guy is like a bank of knowledge when it comes to artist management!!!

I have had the chance to work with great people like, Davey Badiuk, who is truly a world class producer and party animal, and Sara Steben, who has the craziest dance skills I’ve ever seen hit the dance floor!!!

I’m sorry for the longwinded answer, but I can keep going;) I’m truly privileged to have so many amazing people around me, and I really love them all…

When can the fans expect a music video? What is most exciting when shooting a video?

JC: I can’t announce a specific date yet, but we are targeting sometime towards the end of February. I never had the chance to shoot a professional music video before but I can already tell that the most exciting thing is going to be the energy from all the dancers during the shoot. Rehearsals have been a blast!!!

When working on songs, what inspires you?

JC: Personal life experiences… I usually write about what I am feeling and living at that specific time in my life. For example, “Level Up” was written when I was going through a bit of a downer after a difficult break up with a close girlfriend.

You are heading out on a spring promo tour, where will this tour bring you? What can we expect?

JC: Yes, I am going on a radio promo tour around Canada!! I am so excited to be able to travel and talk about my music, and visit new places and faces!!! I can’t wait!!!

You are signed to Studio One, which is an up & coming new Canadian label, how is it working with them?

JC: As I said before, I have an amazing team backing me up and working hard to make this dream a possibility, and they haven’t let me down yet. It doesn’t look like they are going to either!!! We have our disagreements at times, but these guys know what they are doing, and in the end, I can always count on my team!!!

Who has been the biggest influence in your music career, up until now?

JC: My biggest influence up until now is my producer Anthony Boccardi. Our relationship has grown to a point where he is my best friend and somewhat of a mentor to me. He gives me advice and guidance. If I don’t get to see him, I get a phone call from him. I am grateful to have him in my life.

When it comes to fans, have you had any of those crazy fan experiences?

JC: I wouldn’t really say crazy fan experiences, more like awesome experiences in fact. I’ve even had a couple of moments where people approached me for a picture and autograph, and that was before “Level Up” was even released, which is pretty cool.

Here, at Canadian Beats, we always like to include a portion of random/ fun questions, first of all, what is the first album you ever remember buying?

JC: I remember the first one I bought was a Sum 41 album!! I was the happiest kid ever. I used to be a huge fan of them back in the days. I really wish they would come out with some new music!!!

When it comes to social media, which do you prefer, Twitter or Facebook? Do you find them a big part of the music industry?

JC: Right now, I prefer Facebook because I get to interact with more fans. I’m not a twitter expert yet. I find that they are very important tools in the music industry. You don’t get to see your fans everyday but at least you can communicate and talk to them on a daily basis. It’s really all about the fans and keeping in touch!!!

If you have a day off, what could we find you doing?

JC: On a day off, I actually enjoy playing video games… I am a huge geek when it comes to superheroes. I’ll be reading a comic or watching a superhero movie.

What is the one word you would use to describe your sound?

If you could have any band or artist cover one of your songs, which band would you choose?

JC: If I could choose one artist to cover one of my songs it would be Rihanna. I find that she has one of those voices that reach deep inside you and doesn’t let go. For that matter, I’d really love to hear a female vocalist on any one of my songs.

Last but not least, is there anything else you’d like to say to your fans?

JC: I LOVE YOU!!! I want to thank you for all your support and positive comments. I’m doing this all for you!!!