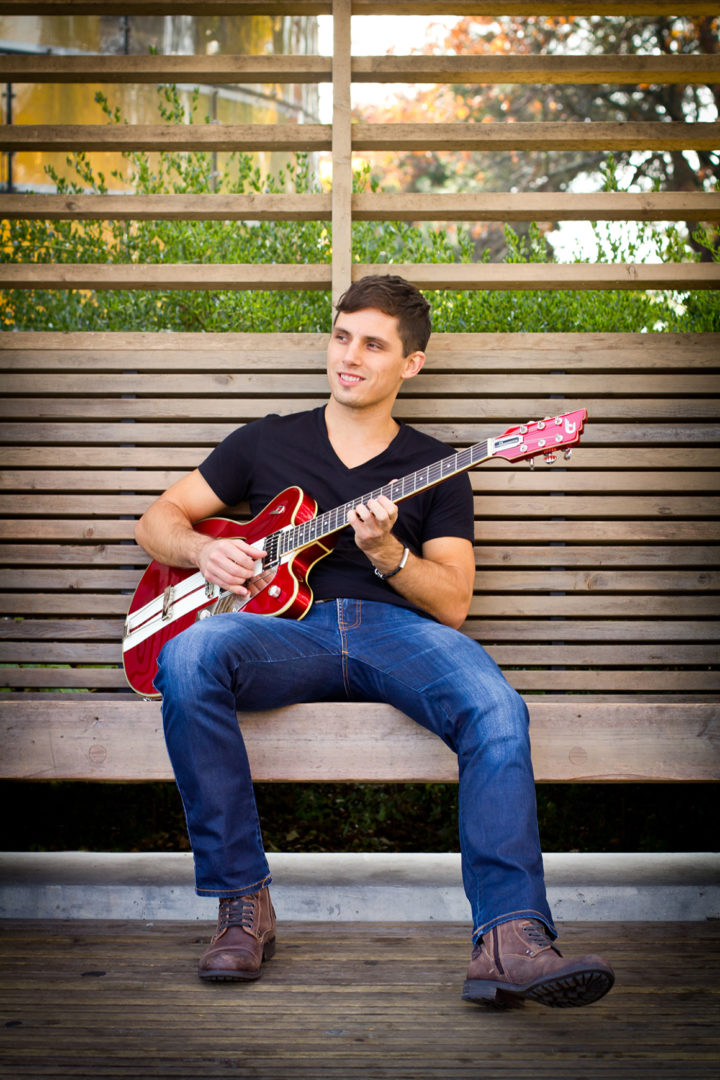 If you weren’t aware, Marianas Trench guitarist Matt Webb is a little less than a month away from releasing his second solo EP, ‘Right Direction’, on February 4th, 2014. Following this release he is heading out on tour in March with Fake Shark Real Zombie and Jessica Lee, hitting 13 cities between British Columbia and Ontario.

To see if the tour is coming to a city near you, all tour information can be found on https://www.facebook.com/MattWebbOfficial.

Be sure to follow Matt on social media so you don’t miss anything about his new album and tour:

We were fortunate enough to be able to conduct a phone interview with Matt, check it out below!

How did you manage to find time to write and record an EP after all that Marianas Trench did last year (two cross Canada tours, an America tour, award shows, video shoots, and the 2012 Grey Cup halftime show)?

As soon as we stopped touring I basically had like so many ideas brewing in my head that it’s been like three years since the last EP so I had lots of life experiences to reflect on and as soon as we had some time and were back from tour and not too busy in the studio I basically just wrote some songs and recorded them whenever I had free time.

What can your fans expect from Right Direction?

I’m really excited to share it with everybody it’s a totally different style from what I did before. It’s the right direction, if you will, I just feel like it really represents me as a person, the songs and the sounds – it’s really me. I’m stoked, I wanted to create an organic, cohesive sounding EP that people would enjoy and I’m pretty proud of this, I can’t wait to share it with everybody.

How do you think the fans will react to it?

I don’t know, hopefully positively, that would be ideal. I did my best, and it’s definitely different, it certainly doesn’t sound like Marianas Trench stuff, it actually a bit of a departure from my last EP too. I have the luxury of being able to do whatever I want because I don’t really have at the time I didn’t have a particular sound or anything like that but I think this one’s a lot more focused and I’m excited to show it to everybody. I hope they like it, we’ll see what happens, I’ve got my fingers crossed.

Cereina asks: Are you planning on making any videos for the songs?

Yeah we just shot a video for the lead single, “Right Direction”, and that is going to be coming out shortly.

Morgan asks: On ‘Coda & Jacket’ you had help from the other guys in the band, was it the same for this EP?

Do you think you’ll end up leaving Marianas Trench to pursue a solo career?

Oh hell no! Never, never. Are you kidding me? Marianas Trench is my family and they’re always my number one priority. I like making my own music and doing stuff that’s different so when I have some spare time, I’ll put together these EPs and I’ll probably keep doing it forever, but I’m never going to leave Marianas Trench. It’s just another creative outlet you know what I mean? I’m a musician, I like to do different stuff but I can’t stress enough, I would never ever leave Marianas Trench. The guys are really supportive of me doing my own stuff when I have some time and that’s it, it’s just something to do in my spare time.

Will you do anymore touring for Right Direction? Such as farther east in Canada or the States?

The touring is challenging for me because obviously I’m very busy with Marianas Trench so when I have time I’ll try and get out as much as I can. At the moment we’ve got a big tour booked starting March 5th in Hamilton, it sort of plays through Ontario and heads west , unfortunately I’m not going to make it out to the Maritimes this time which I’m really disappointed about. There just wasn’t enough time, but for the future I will absolutely do my best to get out there and I’d like to bring the Right Direction tour to as many people as I possibly can. As soon as I get some time I will tour as much as possible.

Ashley asks: What’s the most exciting part of releasing an EP?

For me right now it’s having a bunch of songs that I’m really proud of and sort of waiting in anticipation for what all of the fans are going to say. I’m excited to share it with people and I hope that they dig it. I obviously make music for myself but it be nice if people were stoked for what I was doing. I’m just excited, this tour is going to be great, I have this EP coming out and then I’m going on tour, then Marianas is going to get super busy again and get back out on the road with a new record, so that’s all really exciting. Lots of good stuff going on in my life, I cannot complain at all.

Do you have a favourite song off of the EP?

Let me explain this to you, the EP itself is actually only four songs but when you buy it on iTunes there are two iTunes like B side tracks, it’s a six song total thing and I think, I don’t know, I have a bunch of favourites. There’s this track called “Heartbreakers” on the EP which I love, I really, really like that track. I love the single “Right Direction” and there’s another song called “Hang Tight” which is one of the iTunes exclusive tracks, and that one is a personal favourite as well so, I like them all, I’m really proud of it.

Do you think your fans will like one song more than the rest?

I don’t know, everybody’s always got their favourite track, maybe they’ll hate everything, maybe they’ll like one or two, or maybe they’ll love them all. If I was to say that you wanted to hear what it’s all about I would listen to “Right Direction”, it sort of sums it up pretty well, there’s like a little acoustic ballad that’s cool. Pick a song, any song.

Jeannette asks: Is there much of a difference between performing your own songs live and the Marianas songs live?

Yes, there is. My stuff is a lot more stripped down, there’s not too much to it. I’m still getting up on stage and having a blast every night, that’s sort of the most important thing, I’m still playing guitar and singing, so I guess really at the end of the day it’s no different at all. It’s just in terms of a listening experience, like Marianas Trench is obviously a whole show and crazy production and I sort of wanted to do the complete opposite with my solo stuff, just to like really strip it down and play smaller shows and interact a lot more with the crowd and stuff, like we used to do in the early days of Marianas but once you get to a certain point it just gets too difficult to do that as much anymore. But I really look forward to going out and playing some smaller shows and meeting everybody and just having a good time.

Daisy asks: What are you most excited for about the tour?

I’m excited to be going out on the road with Fake Shark and Jessica Lee and just having a lot of fun, see some new faces, see some familiar faces, bring the music to as many people as we can and get out, meet lots of people and just have a good time. Touring is such a fun experience and I’m really lucky to be able to do it for a living. I’m just excited – stoked – I’m really giddy for the tour, I can’t wait.

Is there any band or artist that you would absolutely love to tour with?

Oh, sure. I’ve always want to tour with The Police, I think that would be really cool, I’d love to tour with, gosh I don’t know, I haven’t been listening to a lot of music lately cause I’ve been in the studio doing my own stuff so I don’t really know what’s going on right now, but the Foo Fighters would be so much fun.

Is there any place you would love to tour?

Everywhere. I mean, I’m fortunate enough to travel to Australia and the Philippines and a bunch of other places with Marianas – all over the States and Canada, a few other countries, it’s awesome, I really like can’t pick a favourite, some shows just have spectacular energy to them. You can be playing in the crappiest town in the world but if the crowd’s like got a magic to them, it can be some pretty special stuff.

Are there any Canadian bands or artists that you would recommend to your fans?

Absolutely. There’s tonnes of amazing Canadian artists, like I mentioned before I’m going out with Fake Shark Real Zombie and Jessica Lee and they’re both fantastic. I think you should check out Marianas Trench, they’re amazing. There are so many good bands out there like the Hedley guys; they’re great they got a great new record out. I am a huge Drake fan, love supporting him, he’s incredible. Metric, Tegan and Sara.

Finally, is there anything else you’d like to say to your fans?

Just that I’m super excited to see everybody again. I felt like it’s been too long and I can’t wait to get out on the road and bring ‘Right Direction’ to everybody, it’s going to be a lot of fun. The shows are going to be cool, they’re going to be small shows, they’re going to be like dirty, sweaty rock shows. Going to be able to come out into the crowd afterwards and chill with everybody. I’m excited to see what everybody thinks, and if they can let me know when they hear it and tweet me or something what you think I’d really appreciate it. Thanks for all your support, you guys are amazing! And don’t worry, I’m not leaving Marianas Trench for God’s sakes, some people say that, but it’s ridiculous. It would be like just the stupidest thing ever, I love all the band guys, they are my family and I’ve been doing it my entire life and it just doesn’t make any sense, why would I ever leave.