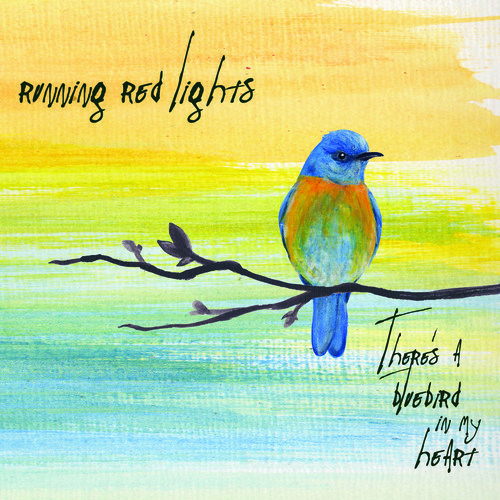 Toronto band, Running Red Lights has released their debut full length album, “There’s a Bluebird In My Heart” to all major online digital distributors, as well as for purchase as a physical CD through their website and CD Baby).

The first single on the album, “Mulberry Love” was released to radio on September 3, 2013 and when I first heard it, I knew it would be one of my favourites from the band. The song is very folksy and the vocals and harmonies are perfectly executed. The lyrics that had me hooked are “But oh how she molds to my lips like a comfortable shirt. And I cannot lie, I would die for a mouthful of her”. I can see why they would choose this song as their first single, as it’s easy to sing along to and addictive from the first time you hear it.

The next song I want to talk about is the third song on the album, “Under The Wire”, which is the proposed second single. This track has a less folksy feel to it, and more of a rock feel to it and will appeal to people who are fans of classic rock, as well as modern rock.

As you know, I usually only talk about three songs when reviewing an album, but there are two more songs I want to tell you about. The fifth song is titled “Love Letter Airplanes” is a slower song that tells a story with softer vocals and fabulous pop melodies.

“Run Away” is the last song that I will be talking about from the album. In my opinion, this song has everything it needs to become a hit. With lyrics such as “Let’s take a chance on something, You’re the only joy I found in this godforsaken town”, and then suggesting that they run away together.

Running Red Lights does a lot of things exactly right, but the main thing is the harmonies and vocals that pair together perfectly, and each song tells it’s own story that you want to hear. The whole album is great, and it doesn’t matter if you’re a fan of rock, pop, country, folk or even R&B, there is something on there for everyone.