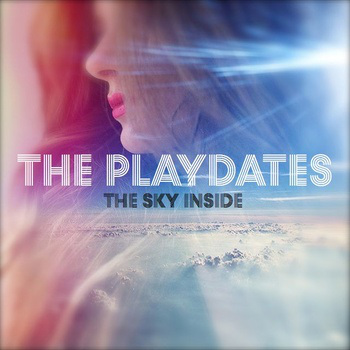 The Playdates are a pop/ rock band from the east coast. New Brunswick to be exact. The band consists of four members, Atom (Lead Vocals/ Guitar), Ryker (Keys/ Backing Vocals), Steve (Bass/ Backing Vocals), and Chris (Drums).
The band released their debut full length album, The Sky Inside on October 15, 2013. The album was recorded in Toronto, Montreal and Saint John, New Brunswick and produced by Greig Nori, Luc Tellier and Adam Dincorn.

The album features 11 songs, including a bonus track which is their original Christmas song, “Christmas for me” which is amazing, to say the least, and gained a lot of airplay on radio stations across the country, along with Much Music!

As usual, I am going to choose 3 songs to talk about, but don’t get me wrong, every song on this album is great. My favourite song on the album is the second song, “Kids of Summer”. The song is a very upbeat, fun pop track. It’s one of those songs that you are going to get the urge to sing along to, just like I did, and don’t fight that urge. I can see why this song was chosen as a single, because as soon as I heard the song, I was hooked. Be sure to check out the video for it: https://www.youtube.com/watch?v=BtB7Kd_8xzE

Next on my list to talk about is the fifth song, “Greedy”. It’s a bit slower than “Kids of Summer” but it still has the electronic pop sound that they do flawlessly. With lyrics such as “If I can’t have you, I don’t want anyone else to, I’m greedy like that” the song tells you a story at the same time as it makes you bob your head to the beat.

The final song that I will tell you about is “Hollywood Sign”, which is the eighth song on the album. I tend to be pulled towards songs that really tell the listener a story. Another thing that I enjoy are songs that show inspiration, dedication and working towards what you want, and this one has both of these features. The lyrics explode at the chorus which includes “One day, you’ll see my name in lights” and “One day, I”ll stand up on my own”. The second verse gave me chills with the lyric, “I know that I’m gonna get my shot, it’s just a matter of time, and I won’t go until I give it all I’ve got, I’m gonna make this mine, I’m gonna shine”.

I personally, think this band has everything they need to succeed. Fun catchy songs, as well as tracks that tell stories and make the listener feel as thought they are gaining insight into the band members lives.