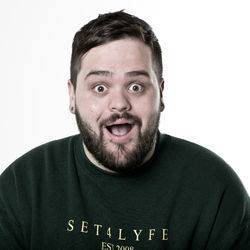 With the disbanding of his last two bands, Joel Cossette wasn’t quite ready to give up on his dream of music. Almost 4 months ago, Joel left his home of Saskatoon and headed out on his own to try his hand at doing music and touring full time. Since then he has released three songs with no plans of stopping anytime soon.

I recently asked Joel some questions about his solo career, touring and his upcoming plans. Check out what he had to say.

In the past few years you’ve playing in a couple different bands but with the end of High Hopes, you decided to try going the solo route. What made you try going solo instead of starting another band?

JC: Well, to be honest, there is too much drama in being in a full band. I am very very selfish when it comes to songwriting and there always seems to be a point in a band where it has to be equal parts. And then of course there’s always drama over silly things. I just want to play the shitty songs I write in my room to as many people that will listen.

How’s the reaction been playing live shows with just you and an acoustic guitar, rather then a full band?

JC: I notice a very different reaction. One thing about playing in a full band is that it’s much more appealing if you already know the songs. However, I love watching people who have never heard of me really get into the lyrics. It’s a great way to make new fans. It’s also a lot more stressful in terms of you have to really sing well because everyone can hear every mistake you make.

You left Saskatoon to try to make a living out of touring and music. How has that been treating you?

JC: Honestly, it’s exactly what I expected. I live out of my car some nights. I’m broke most the time. But the second I hit the stage I remember exactly why I’m doing it.

What cities have you found give you the best crowd reaction?

JC: Hmm that’s a tough question! I find it’s very different crowds depending on the city. Edmonton is mostly people I know fairly well so it feels like a giant party. Saskatoon is kind of the same way. Vancouver the kids just all love music in general which is awesome to see. Victoria I would say is still my favourite city in Canada. It’s just always felt like a home away from home.

Bryan Stars has posted some of your videos on his YouTube channel. How did you get in contact with him and convince him that he should post yours?

JC: Surprisingly I had never actually heard of Bryan Stars before. I guess a bunch of our fans had messaged him asking to help promote us. We then had this explosion of new people on our page and people saying ‘I saw you on Bryan Stars channel!’. So I explored it and sent him an email saying thank you and he’s been super helpful ever since.

You regularly release new material. Do you have any plans for an EP/album?

JC: Yes. I actually just announced yesterday that I will be posting an indiegogo campaign to try and record my first ever full length album.

JC: Just mostly a thank you to all my friends that let me stay at their houses. I really would not be able to do what I do without them. My friend Kevan for doing all my artwork. I just have a really rad team behind me that all believe in my music a lot more then I think I even do sometimes. They really keep me going.

If you want to check out Joel’s music you can do so at the following links.