By Jordyn Armstrong on December 18, 2013@jordynhannah95 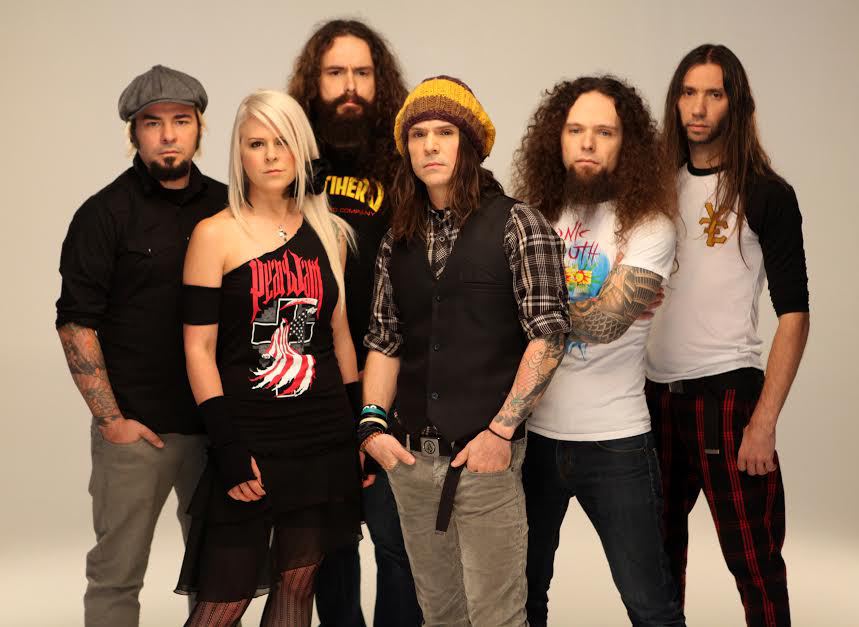 Montreal Rockers, Your Favorite Enemies are grabbing the attention of music lovers all over the globe. Recently, Kerrang! Magazine named them “Canada’s Best Kept Secret”. YFE just released their video for “I Just Want You To Know”, which Kerrang!  also named “one of the top 5 new songs to melt your ears”.

You released your album, “Between Illness and Migration” in Asia and Australia, and it will be released in Canada this coming April. What can you tell your Canadian fans about it? What was the writing process like for this album?

YFE: The recording of “Between Illness and Migration” has been quite a crazy journey right from the day it started… We’re six in the band, and we recorded the album in the catholic church we live in, and as “holy” as that sounds, I didn’t feel as if we were walking on water considering our opposite musical backgrounds and inspirations. The most obvious demonstration of this spectrum is Alex, band’s lead singer, who’s more into ’70s punk rock such as the Pistols, the Clash, Ramones, etc., and then we have Sef, this bearded hairy freak, “rock disciple” who, if you ask him, will die without saying it… grew up enjoying Roxette! Yes, the one and only leather pants pseudo rocker wearing leopard and net tank tops… Go figure!

“Between Illness and Migration” is a long, deep and meaningful journey where the six of us, as individuals as well as a collective, allowed ourselves to simply live, share, scream, laugh and cry about what was defining ourselves for so long… Freedom isn’t about choosing what colors your socks will be today, but it’s about having the guts to be who you really are, without any fears… Life is like a daily battlefield to freedom, and this album, is this journey in music, poems, melodies and noises! Yes… a lot of noises!!!

What plans do you have for Canada with this release. Will you be touring from coast to coast?

YFE: For us, music is all about gathering and creating moments we’ll all, on stage and in the crowd, remember forever… Music has the power to gather beyond every differences, it’s stronger than any religion, political party, and is richer than anyone on this earth, so yeah, based on that, there will be a lot of touring! Really can’t wait to meet, share and live such moments with you all!

Do you find being Canadian makes it harder or easier to be on the International music scene?

YFE: Everybody loves Canadians, right?! Especially now that we have pretty cool mayors!! It’s always a huge privilege for us to bring this unique culture with us around the world… Especially when there is 11 messengers on the road that have huge beards, tattoos and long hair! I mean, we visited cities in China where no bands ever been before… It’s always very special to be surrounded by local people looking at you as if you were coming from another planet and seeing them whispering, obviously about you, in their language! You find yourself thinking “Is this the time when I should call my mom now?”!

What is your favourite thing about touring?

YFE: It’s such a huge privilege to discover the world with your best friends through a common dream and passion… I’ll always remember when we were under the Eiffel Tower for the first time, the entire band and crew together, silently realizing that music brought all of us there. But what I really prefer is to share with the people when we’re on stage since, once music is shared out of our own little world, it doesn’t belong to us anymore…

Also, to be part of moments with the crowd, as one, as if nothing else exists, to touch the sky together… This changed my and our own lives so many times!

Tell us about touring overseas. Is it much different than touring in Canada? What country (outside of Canada) is your favourite to tour so far?

YFE: For me, people are the soul of the nations so, before every show, we love to simply go out and walk in the streets of every city we’re performing… There’s nothing like capturing the vibe before going on stage, since we love to improvise once on stage, and allow everyone in the room to bring a little of themselves into the music… We’ve been so generously received and welcomed everywhere we’ve been, treated as being one of them, so it makes it hard to say which country is my favorite so far… China has been a life changing experience and saved the band in so many ways! Every time we go to Japan we love to call it home, since people are welcoming us even from the airport, and this, since the 1st day we went there! France is the home of so many great authors and poets, which are always inspiring for Alex. For me, they’re the ultimate chefs, from entrance to desert!! The UK is the home of every band who really inspires us, so it’s always pretty rich and crazy to walk behind Joe Strummer, Ian Curtis, etc!

And some few fun questions for the fans:

If you could tour with anyone alive or dead, who would it be?

YFE: Joe Strummer has always influenced me musically, socially and lyrically! To share the stage with him would be such a school of life every night… Sorry Sef for Roxette, I know she brought a lot to music and society but, she just doesn’t come first in my mind! As you say… I’m learning!

YFE: It would probably be cool to say Arcade Fire, but I’m just not there yet in my life, you know, like young people dressing up in a really old fashion way, paying hundreds of dollars for things and clothes we all wanted to get rid of! I would prefer talking to you about Leonard Cohen, which is one of my favorites of all time… As soon as Cohen starts singing, it just literally attracts me and, it’s as if nothing else exists around anymore! His lyrics are so deep, it’s like if wisdom itself was speaking to you, through very deep melodies…

On a different note, I would suggest you take a look at Suuns! It’s a very original outside of the box band from Montreal… I really love their originality and the high level of creativity that lives in their songs! Might not hear this on every “cool” radios in town! This is what I like from this band..!

Do you ever pull any tour pranks on each other?

YFE: We love to live our lives saying it’s christmas every day, which makes our existence pretty magical, unpredictable, and crazy!  Imagine, we once told our tour manager that he didn’t have to come with us to Japan, since we hired someone else, but that we still needed him to bring us to the airport! Once we arrived, we gave him his passport, that we had stolen prior to the trip, and told him he was coming! Unfortunately, we didn’t have any luggages prepared for him, and he didn’t have time, once in Japan, to go shopping, which led him to spend almost two weeks wearing the same clothes!

Once, I stole Sef’s credit card as we were on the plane, coming back home from the UK, and here I was, buying champaign bottles to everyone in the crew, celebrating the tour we just had! Thought he would notice the following month in his bill… I mean, 200$ of champaign… But… Well… You should ask him about it when you’ll see him!

If you could only play one of your songs for the rest of your career, what song would it be?

YFE: “From The City To The Ocean” is a song that saves my life every time I hear and play it. That song has been given to us in a moment where the band was about to break, and all of a sudden, Sef started to play this intro riff, which gathered all of us… And for an entire night, we created that song and played it over and over again… Every time we play it live, it can last up to twenty minutes and we all feel close to the ocean for a moment… It’s a song about being alive, about redemption, and about how we’re all made for greatness, to shine beyond measure!

And finally, as always, anything you’d like to say to your fans?

YFE: Live today to the fullest! Take chances, reach out to your craziest dreams and allow love and hope to outshine every dark side life has to offer! This is what I can’t wait to share with you, live, and one on one with you!