By Jordyn Armstrong on November 20, 2013@jordynhannah95 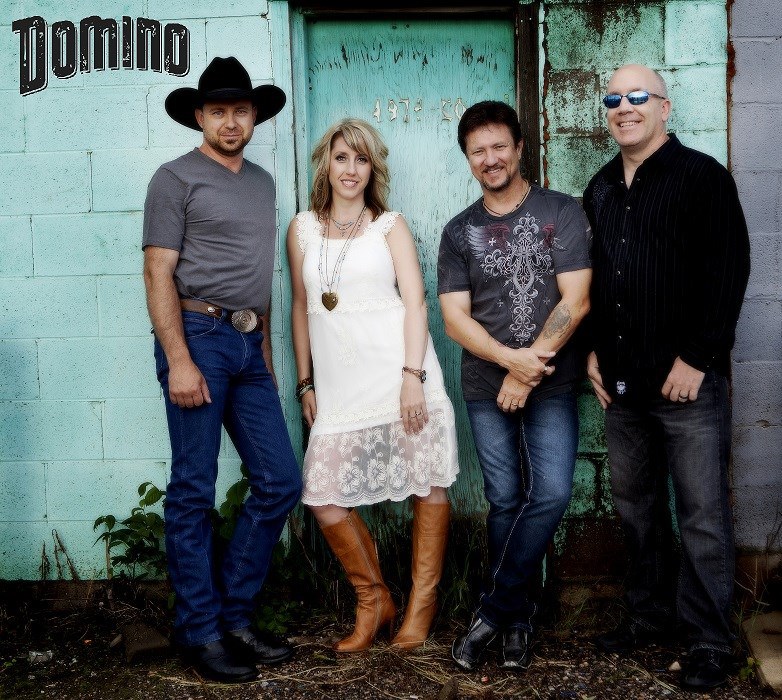 So, you just released your new album, Scrapbook,recently. How has the reactions to this album been?

Domino: The reaction to Scrapbook has been incredible with so much positive feedback. Radio has warmly received the singles “In a Small Town”, “One Day At A Time” and most recently 2:15! We had so much fun filming the video  “One Day at A Time” which had over 1100 views since it’s release.

Domino: The domino effect is the chain reaction that has been happening every time anyone sees us perform! They all tell their friends and by this, from every show we’re building a large following…creating the “Domino” effect. It’s the consecutive nature of one Domino show after another that’s what fans come to watch.

Your first album was under a different band name, Damnedifiknow. What made you decide to change your name to Domino?

Domino: We loved the name, but for us to further our career we felt it best to change it. Deciding on a new name was rather interesting and challenging as we all really liked DamnedifIknow! So by saying it really fast…. we finally decided on ‘Domino”. We feel it suits us!

You have played with some of the biggest names in country music like Jaydee Bixby, Trooper, and George Canyon, how do you think that this has effected you?

Domino: Being able to connect with them all on such a personal level, and watching their performances, only makes us want to achieve that level even more. It’s always an honour to be able to perform as an opening act and to watch their fans waiting in anticipation for their favorite artist…that’s amazing! Certainly has helped us to stay more focused on where we want to be and has inspired us to keep chasing our dream.

For the new listeners, how would you describe your music?

Domino: Country, Creative and Cool! We are definitely country! No question! We love country music and some may say we have a bit of a traditional and country’s new sound and that’s okay.

What can fans expect while you are on stage?

Domino: Everyone can expect a very energetic, engaging, and FUN time! We can be very diverse in what we play depending on the event, however we really enjoying playing our original songs and hearing the crowd sing along, don’t think that feeling will ever go away! We love meeting our fans after the show and hearing what they have to say.

You guys are all quite close, Luanne and Russ are even married. What’s it like touring and playing music with people whom you’ve known for quite a while and have grown so close to?

Domino: It’s awesome…… We all agree, that we are lucky enough to play with three of our best friends. Sometimes the husband and wife arguments get a little old, but we have two referees. Joking aside, we truly are family and enjoy spending time together on and off stage.

When you’re not on stage, playing music, or doing band related stuff, what can we usually find you doing?

Domino: We all love to spend quiet time at home with our families. Scott loves to play hockey and cycling, and golfing.  Kent enjoys golf, camping and target practice. Russ and Luanne love camping in the mountains, golfing, and floating down the Red Deer river on raft with friends. But, so much of our free time is spent making music with our friends. Sitting around a campfire, with a guitar and a drum box is one of our most favorite things to do.

How can fans find out more about you? Do you make yourself available through Facebook or Twitter?

Domino: You bet! Our Twitter name is This Is Domino and we are also on Facebook – at https://www.facebook.com/Dominostettler.  If you check out our homepage on our website, there are links to all of our social media pages – www.dominobandsite.com We love connecting with everyone!

So here’s some fun questions for you:

Who would you consider your biggest influence in music?

Domino:  Scotty would say John Bonham of Led Zepplin. First time I heard him as a kid, it made quite an impression on me. When those drums kicked in, I thought that is what I have to do!  Three Dog Night and Van Halen are big ones for me as well.

Kent would say his biggest musical influences are Ricky Skaggs, Johnny Cash and Van Halen. All have inspired me so much!  oh and Ian Tyson! Can’t forget Ian Tyson.

Russ would say The Beatles have been a huge influence on me. Pink Floyd, Boston and Alabama are all big influences!

Luanne would say that Elvis and Patsy Cline were two of her biggest musical influences as a young child. More recently would be Carolyn Dawn Johnson and Gordon Lightfoot.

What would be the biggest goal you set for yourselves as a band?

Domino:  Right now we’re working on a lot of things towards different career goals. Definitely a highlight would be a CCMA Group of the Year nomination and ultimately achieving that title. Being able to entertain in say the Edmonton Collisium or the Calgary Saddledome is certainly on our list  also.

What is the funniest tour memory you have?

Domino:  One of our funniest memories is a show we did up at Alder Flats. We were pulled over by the police as we pulled into town, and Kent was doing 80, as he thought that was the speed limit, but it was only 50. He was so nervous when the policeman pulled him over, and asked him for his license and registration, he was shaking so bad, really bad. Gave the policeman his licence and registration and then filled him in on why we were in town, being the band. The officer thought that was so cool that we were the band, he let us go, and Kent then got the nickname Shaky! The policeman showed up at the show later that night, and bought a CD and we signed it for him!

If you could only play one of your songs for the rest of your life, which would you pick and why?

Domino:  We all have our own personal thoughts and choices, but collectively as a group we all agreed on The Sin Tonight. It just has such a cool feel, chill, and relaxed and we all really get into the song when playing it.

Is there any final words you’d like to say to your fans or people who are new to your music?

Domino:  To our fans we would like to say, thank you so much for all your support! If it wasn’t for you we wouldn’t be where we are today!!! For people who are new to our music, Welcome aboard, you are in for one heck of a ride!!