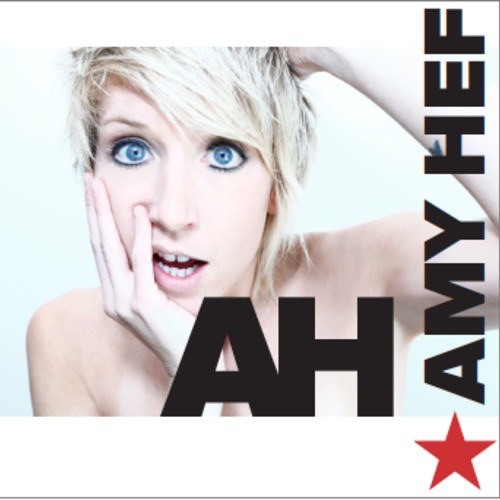 Amy Hef started out as a drummer for Juno-nominated artist, Janelle. Later, she traveled to LA and attended Hollywood’s Musicians Institute and received top honors. She has won AMP Radio Rockstar competition, as well as being named one of George Stroumboulopoulos’ Top 3 Buzz Bands in 2011.

Her album, “Ah!” was produced by herself and her older brother, Doug Hefferenan and recorded in Los Angeles, CA. She shares her time between Calgary & LA, touring full time and has shared the stage with many big bigs, such as Metric, Bif Naked and Chilliwack.

The album starts strong with “This Thing Between Us” which has a pop feel, and immediately gets you in the mood to sing along. The album continues to keep the listener intrigued.

The fourth song is one of my favourites, “I Can’t Wait”. It has a pop feel but her voice brings a rock edge to all of the songs. This song is a good summer party song about wanting Winter to be over so she can have some fun in the sun, with lyrics such as “We’ll be having a good time, under the sunshine” and “Having some real fun right by the ocean”. I think this song spoke to me immediately because the weather is getting cold and it’s nice to imagine the summer heat.

The album has so many great songs that it was hard to choose just two to talk about, but I decided that I had to tell you about the final song which closes the album with a bang. “Being Awesome” which I would definately call a party song. It’s very upbeat and fun, and let’s be honest, that’s the perfect kind of song to close an album.

I realize I talked about the upbeat songs, but don’t get me wrong, there are slower songs on the album as well, and they are just as good, such as “Perfect” and “Don’t”. I would highly recommend you check out this album.