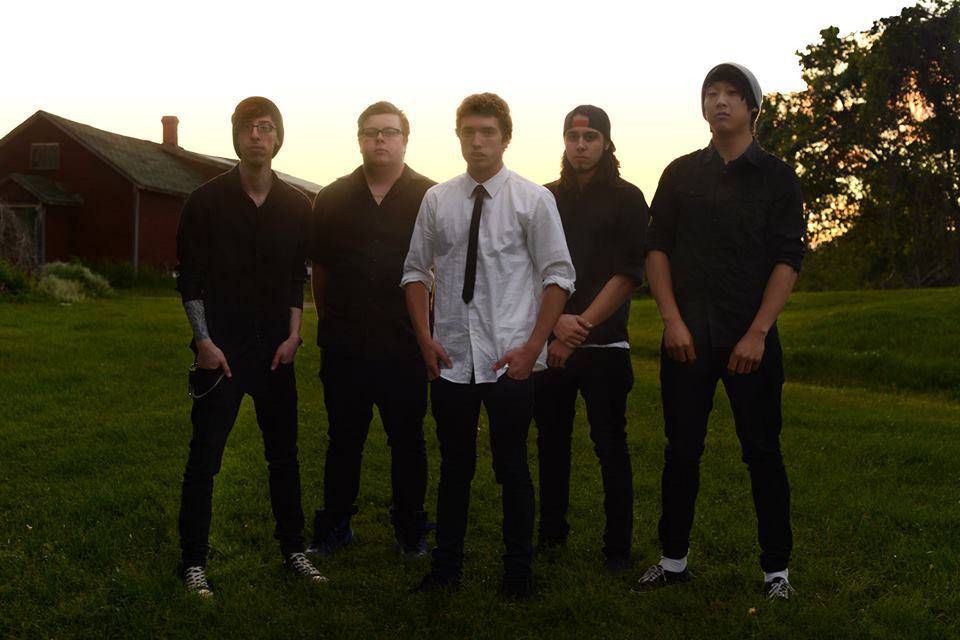 The band has released their first EP, “War” on June 24th, you can get the EP for free on their Bandcamp page: http://adivinesilence.bandcamp.com/ as well as show listings at www.adivinesilence.com

A Divine Silence works with an organization in St. Catharines, Ontario called Bands Fur Animals, for more information on the organization, please check out their Facebook page:

I have been given the chance to ask the band some questions, so keep reading to find out more.

First of all, how did you all meet and form the band?

ADS:  The roots of this band lie in past musical projects.  These projects were rather short lived and there were a few member changes.  We all kind of found each other through different musical outlets and even though there was a foundation in place when the 5 of us met we decided to change up the name to symbolize the new beginning.

You released your first EP, “War” on June 24th, how has the response been?

ADS:  The response has been great so far.  We have been receiving alot of positive feedback and a lot of support from people around the Ontario music scene, which is great considering how new of a band we are.

What song on the EP is your favourite? Can you explain the writing process behind that song?

ADS: I think that all of us agree that our favourite song on the EP is “This Pain.”  It was the last song that we wrote for the EP before we recorded it and we think it is the song that best represents us as a band and where our sound is headed.  The writing process behind that song was very natural.  We are proud to say that we wrote it together as a band.  One day our guitar player Nick showed up at practice and started playing some of the riffs he had been working on.  We all really liked them and we began jamming them out.  Michael already had some lyrics written and threw them on top.  After only a few practices we pretty much had a full song.

You do a lot of work with Bands Fur Animals, how did you get involved in this organization?

ADS: BFA owner/founder Jess Greene originally knew Nick through one of his old bands.  She heard that he was in a new band and checked us out.  I guess she liked what she heard and got in contact with us and we just kind of rolled with it from there.

Why did you choose this organization to be a part of?

ADS: Its a great organization with a great cause.  We support animal rights and we’re also good friends with Jess so it works out really well.

When can your fans expect something new from A Divine Silence?

ADS: We are currently in the process of putting together a music video for “This Pain.”  That will be our next major release and we are hoping to have it finished before the end of the year however we are not rushing anything.  We also have been writing a bunch of new songs that we are super excited about.  Our EP hasn’t actually been out that long but we really want to show everyone what we’ve been working on so people can probably expect to hear a single released sometime early in the new year.

If you were to put together a tour, which bands would you want to be part of it?

ADS: We would obviously be the headliners, that’s a given :).  Collectively I think the one band we’d all really like to tour with would be Memphis May Fire, they are a great band and I’m sure most people who listen to our music like them as well.  Other bands we all like are A Day To Remember, Bring Me The Horizon and Parkway Drive.  To keep the mood light we’d probably want to throw Steel Panther on there as well, just because they are so jokes!

Canadian Beats is all about Canadian music, so who are your favourite Canadian bands or artists?

ADS: Two bands that really paved the way for us and our music scene are Alexisonfire and Silverstein, we love both.  We also really like Protest The Hero, Billy Talent and Lights but there are so many talented Canadian musicians out there.

We always like to include some random “fun” questions for your fans to get to know you better, so here goes:

Since you are involved with “Bands Fur Animals”, I have to ask if you have pets and if so, tell us about them!

Nick: I have two dogs.  One is a Bichon we’ve had since she was a puppy and one is a terrier/something else that we found while walking our other one.  They are both adorable and I love them both.

Mark: I had a Dog and a Cat up until I was about 10. Unfortunately we had to get rid of them because it was just too much work for my parents. I still love animals though and hope to have another pet someday.

Michael: I have fish… my mom is allergic to animal fur, and never really wanted a pet anyways, so unfortunately I never had the chance to have one.

Mike: I have a cat named pumpkin and he’s fat lol

Nick:  The first cd that i ever bought using my own money was either Satellites By P.O.D. or one of the older Nickelback cds aha i was very young.

Mark: I think the first CD I ever bought was Seether or Guns N Roses. Was unfluenced a lot by Classic Rock music when I was younger.

Michael: Hmmm, I’m pretty sure the first CD I bought with my own money (probably my parents money though) was either American Idiot by Green Day, or Billy Talent the first album.

Devon: I usually get CDs for Christmas or my birthday so the first album I bought myself was “Nightmare” by Avenged Sevenfold

If you could only watch one TV show for the rest of your life, which show would you want it to be?

Nick:  I`d probably have to go with South Park because of how many seasons there are and the fact that they continue to pump out quality episodes to this day, which is hard to say about most shows.

Michael: I would probably have to go with The Simpsons, I loved that show growing up and I still love it now, it never gets old! Everyone in this band probably thought I was going to say Heartland… NOPE!

Devon: I’d have to go with Friends because it’s always funny no matter how many times I watch it and c’mon…Joey!

What would your fans be surprised to learn about you?

Nick: Burritos give me gas

Mark: I’ve never had any kind of formal singing lessons

Devon:  I have a gerbil tattoo on my chest

If you had to choose one word to describe your music, what word would you choose?

Mark: Bitchin’ , For all you Steel Panther fans

Michael: Pterodactyl. The guys will understand this one haha

ADS: Thank you to everyone who has supported us and continues to do so, it means the world to us.  We are really excited for the future of this band.  We have alot of big things in store, starting with our music video.  Feel free to check us out on our facebook page (www.facebook.com/adivinesilence) and like our page to stay updated with what we are doing.  Lastly we`d like to thank Jenna and Canadian Beats for this wonderful interview.