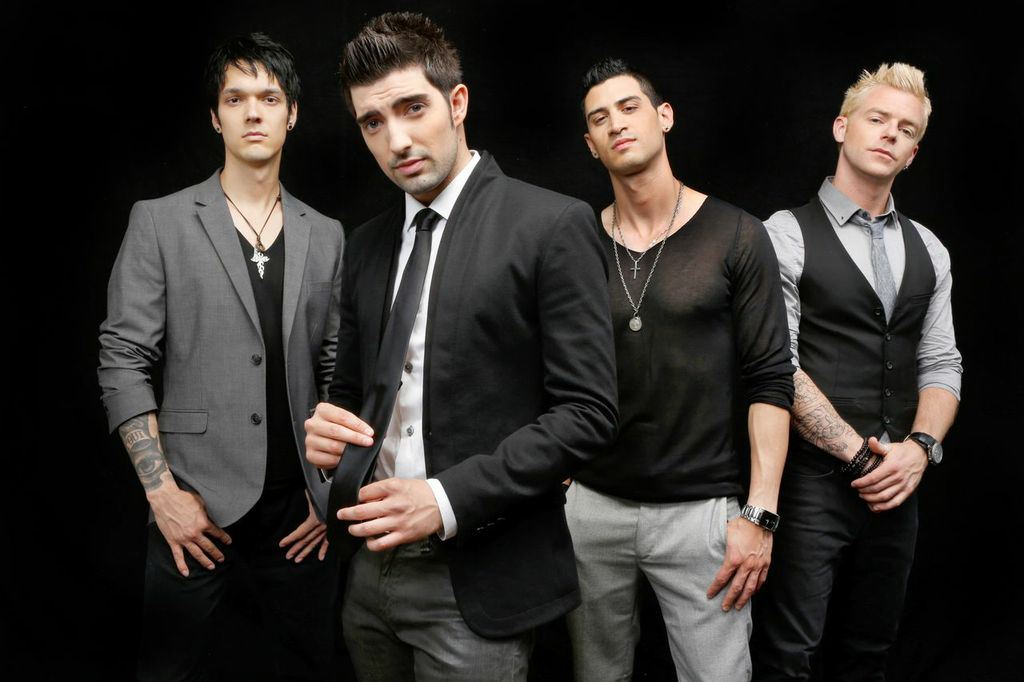 Neverest is a pop/rock group from Toronto, Ontario. The band consists of Spee Chalkiotis (Lead Vocals), Paul Loduca (Bassist/ BG Vocals), Mykey Thomas (Drummer), and Greg Keyes (Guitarist/ BG Vocals).  They made their way on many people’s radars when their Gold single, “About Us” topped radio charts.

Their most recent single, “Rewind” has kept Neverest fans happy and kept them at the top of radio and video charts. Neverest was a part of the sold out arena tour with NKOTBSB in Canada and Europe, which was a great move for their career.

I had an opportunity to do a virtual interview with the band, so keep reading to find out more.

How did Neverest come to be? How did you choose the name?

The name is a word we created based on the idea that everyone has their own “Mount Everest” to climb; dreams and goals they want to achieve.. So our take on it was to “Never rest until we achieve our Everest.” So it was fitting to throw an “N” on Everest and make it one word becoming, “Neverest”.

Paul- “Spee and I have been at it for almost 4 years now, working very closely with our production team, “Vicpark” and our management team which includes Howie D from The Backstreet Boys.

We met through our producer, Mike Kiofos, who had been developing Spee in his song writing and singing for several years before and had also acted as a mentor to me during my time in the previous band I was in, before uniting the two of us for Neverest.

After parting ways with our original drummer and guitarist, Mykey Thomas (our new drummer) and Greg Keyes (our new guitarist), entered the band just this past year. I’ve known these guys for years. Our old bands used to play the same local Toronto music scene back in the day. I knew they’d be a perfect fit and they felt the same. We’ve never been stronger as a band so it’s been a great ride together since.”

Our musical influences in writing, performance and presence, stem from a variety of great artists. Michael Jackson has always been a huge influence, especially in our writing.  From Bruno Mars, Dallas Green and Maroon 5 to artists in the rock world like Miles Kennedy (Alter Bridge), Chris Cornell (Soundgarden), Ian Thornely (Big Wreck) and even Nu- metal bands like KoRn, Limp Bizkit and then some. Yes… as much as we love our pop music, we’re all metal heads at heart! lol

You have toured with many big name acts, what has been your favourite tour to date?

The NKOTBSB tour in Canada and Germany would definitely be the highlight of our career so far. Not only because of touring with two of the most legendary pop groups of our time, but because it was our first stadium tour ever! We had dreamed of playing those sold out arenas of 20 000 people, all of our lives. We were blessed enough to have it all come to fruition on that tour. It was incredible getting to play some of the venues we loved as kids in our hometown of Toronto, like The Air Canada Centre and Skydome (Rogers Centre). It was also awesome to be out there with our manager, Howie D of BSB. It still boggles us sometimes that we actually “know” him. lol. He’s so great with us!

We’d love to tour with artists that we really respect and look up to like Bruno Mars, Maroon 5, to homegrown Canadian icons like Hedley, Marianas Trench and even Nickelback would be amazing!

You released a new single, “Rewind” in July, what has the response been like?

The response to our new single “Rewind” has been pretty fantastic so far. People seem to be loving our new look and sound. “Rewind” has got a new up-beat edge to it, lyrically and musically. We’re truly proud of it. Our fans (“Nevies”) have really taken to it quite well considering it’s a much more edgey sound compared to our previous hits “About Us” and “Everything”. We really wanted to take things to the next level with this new album and it started with “Rewind” and the Hollywood action movie we shot for it! We’re in crazy fight scenes, jumping off of buildings, there are planes taking off and an epic performance shot! Bruce Willis ain’t got nothing on us in this video! lol We had the most fun shooting it so it had great energy and I think that really comes through when you watch it!

You are heading out on tour with Shawn Desman and Tyler Shaw, what stop are you most excited about?

Shawn Desman and Tyler Shaw are good friends of ours, so it’ll be a lot of fun being on the road together for the first time! It’s an entire East Coast tour, so we’re absolutely jacked about every date out there, considering it’s been 3 years since our last visit! It’ll be so great to reconnect with our fans out there and hopefully connect with many new ones!  We’re especially looking forward to the dates in Newfoundland, since we’ve never been there before!

What can the fans expect next from you?

Fans can expect a brand new full length album in early 2014, along with an exciting new rockin’ live show followed by another Nationwide tour!

You will be performing at We Day this year, have you done this in the past or is it your first time? What made you decide to take part?

We’ve been part of the We Day family now for about 3 years and it has been an absolute honour and privilege to be a part of such an incredible movement. The opportunity was introduced to us through another one of our great managers, Jeffrey Latimer, and once we played our first We Day in Toronto, introducing the one and only Spencer West, we were absolutely hooked!

There is nothing like the energy and enthusiasm of those kids in each arena. It is so inspiring and infectious. We have been part of many We Day events this year already and will be performing at the 4 big ones coming up in Winnipeg, Saskatchewan, Montreal and Halifax!