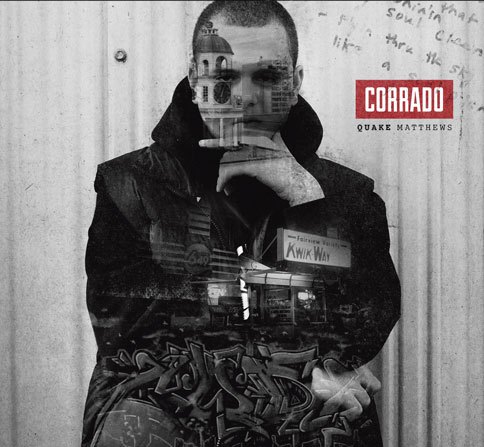 Quake Matthews is a rapper and songwriter from Halifax, Nova Scotia. He released his latest album ‘Corrado’ on April 4th 2013. His album features artists like JRDN, Kayo and Cam Smith.

This album is My favorite hip hop album released so far in 2013. My favorite song off this album would have to be Dance Song or I Hate Money. This isn’t your typical hip hop album, the songs have strong means unlike a lot of hip hop songs.

The first song on the album is titled ‘Feel’. The beat is really awesome in this song. This song reminds you that you have to be glad you can feel. Not necessarily the feel when you touch something but the kind you feel inside.

‘Dance Song’ is one of my favorites by Quake. Against he beat is really awesome and catchy. In this song he’s saying he wants to be himself and write music for himself and nobody else. He might not be like every other rapper out there but it doesn’t matter because he’s making himself happy. He could have wrote a dance song but instead he wrote a song telling people he’s always going to be him.

‘I Hate money’ is all true. People classify themselves by money. They think the people with the most money are the best. Like Quake says “if you broke and steal a loaf of bread, you a criminal but if you don’t then you won’t get fed” we need to realize people are struggling and there’s people with tons of money that will do nothing about it.

‘We Can Do Better’ is about the world needing to be better. There’s a lot of violence going on. “I ain’t a preacher and I ain’t giving no lectures all I’m trying to say is we can do a bit better”. The song has a really good message for people of all ages.

‘Fan in Me’ is telling all the fans that just like them Quake is a fan too. The feeling fans getting during those moments leading up to their favourite artist going on stage, Quake had that feeling too. Even though he is known as an artist, he is also a fan.

‘Boy to a Man’ is the last track on the album. This song is an awesome way finish off a album. We all make mistakes growing up and want to change them. Those are the times we always remember. They shape who we are.

As I said before this is my favourite Hip Hop album of 2013. I highly recommend going to see Quake live if you get the chance. You won’t be disappointed.