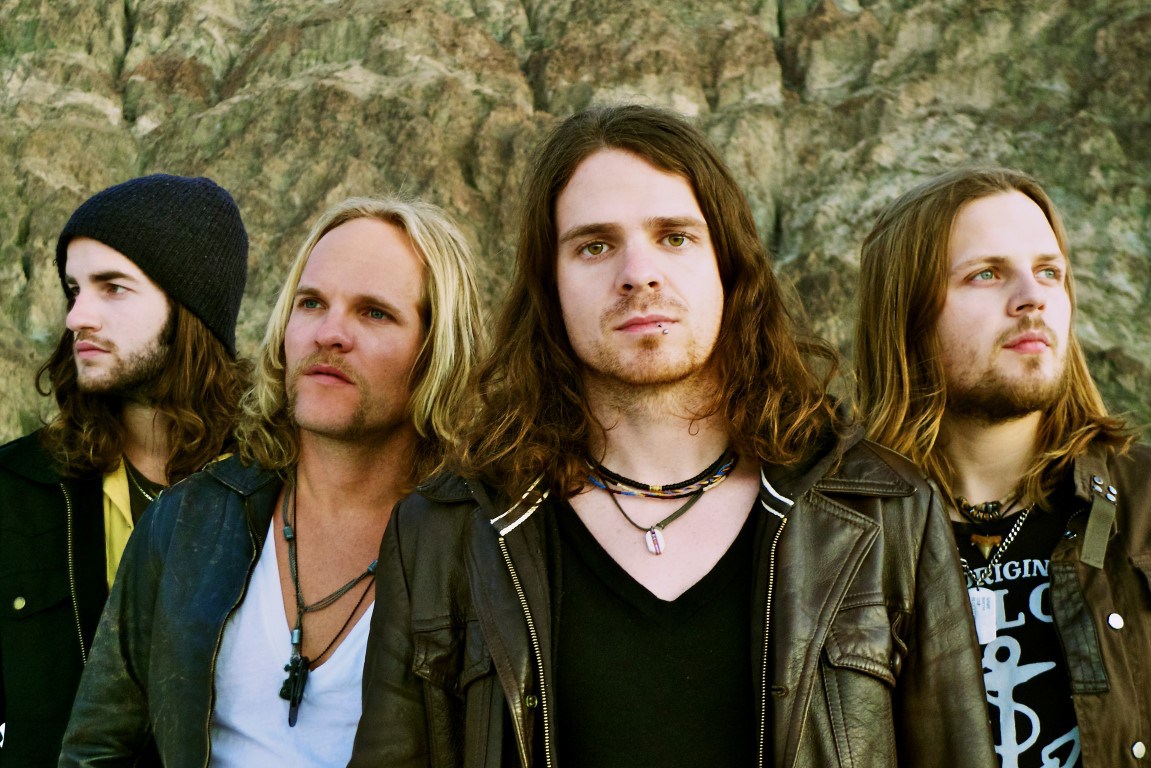 One Bad Son is a hard rock band from Saskatoon, now living in Vancouver. The band features Shane Volk (Vocals), Kurt Dahl (Drums), Adam Hicks (Guitar) and Adam Grant (Bass). They have released two albums and establishing themselves in their home province, the band took off to Vancouver and signed a deal with 604 Records.

After signing with 604 Records, the band released a self-titled album, which features their single, “Retribution Blues”. You can get the album here: https://itunes.apple.com/ca/album/one-bad-son/id564358496

On top of all this, the band is currently on tour, you can catch them in Toronto at the Tattoo Rock parlour tomorrow (October 25, 2013) for the last show on the tour, more information here:

I have been fortunate enough to get an interview with Bassist, Adam Grant, so keep reading.

How did you choose the name One Bad Son?

AG: The band had already chosen that as a name when I joined. But from what I’m told, the story isn’t that interesting. It was just a name that someone thought of that sounded cool and seemed to fit the bill.

AG: As mentioned before, I joined the band later, about 3 years after it had formed. Kurt and Shane both played in different bands previous to OBS. So they got together and they began jamming and invited Adam to join. Previous to my joining the band, they went through a few bass players. Kind of the classic story, I had an ad up in a music store in Saskatoon and they called me in to audition. I think they were a bit freaked out by the fact that I was only 17 at the time. But it all worked out!

AG: I was not really seriously involved in music until my high school years. I think I started playing bass at age 13 or 14. But I do remember, as little kid, always enjoying any chance I got to sit at the piano at my grandparent’s house. I was never able to play anything, but I just liked hitting the keys and making noise.

Your single “Scarecrows” reached top 5 at Canadian rock radio, how did that feel?

AG: It was pretty surreal and certainly unexpected. The four of us believed in the song and knew that there was something special about it but to go Top 5 in Canada, that was something else!

You are on tour with Crash Karma this fall, what date are you most excited about?

AG: I’ve been excited for all the shows for different reasons. Obviously Saskatoon was exciting because it’s our hometown. But every stop has been special. Red Deer and Grande Prairie were completely sold out which was amazing. Getting back to Vancouver was great. And I love going out east to play. We can’t wait to get into Ottawa and Toronto and hit Northern Ontario along the way.

You’ve toured with many great bands, including Theory of a Deadman, Three Days Grace and Monster Truck, who else would you like to tour with?

AG: Touring is such a bizarre lifestyle. You get to know people in a way you could never expect. So as long as the people were cool and fun to be around, I would tour with anyone.

AG: New music. We’re hoping to get into the studio early in 2014 to get the new album recorded. After this tour, that will be priority #1.

Canadian Beats is all about Canadian music, so who is your favourite Canadian band and/or musician?

AG: There are so many great Canadian bands and artists, both past and present. I’m a huge Rush fan. Their music has always been interesting, inspiring and perplexing to me. Plus, Geddy Lee owns it on bass. Blue Rodeo and Tom Cochrane are from my childhood and I have so many great memories attached to their music. As far as new Canadian music goes, it’s hard to deny the success of great bands like Monster Truck and The Sheepdogs. Both are great groups of guys putting out some solid material.

If someone has yet to hear One Bad Son, which song would you direct them to?

AG: I would like to think that we can’t be completely summed up by one song. So I’d suggest ‘Scarecrows’ AND ‘True Grit’ to get the full spectrum of OBS.

We always like to include some random “fun” questions for your fans to get to know you better, so here goes:

AG: I was a bit of a late bloomer in the realm of concerts. So the first concert I attended was actually Velvet Revolver when they came through Saskatoon touring for their first album.

If you could only listen to one song for the rest of your life, which song would you choose?

AG: It would have to be something that I would never get sick of. Lets say ‘Tequila Sunrise’ by The Eagles. I love that song, it’s so laid back and it would keep me from getting pissed off that I can only listen to one song for the rest of my life.

Do you prefer Twitter or Facebook? Do you find social media an important part of the music industry these days?

AG: Both. I think bands need both. Social media is a huge part of the music industry. It’s undeniable that a strong presence on social media is essential for bands to both promote themselves and connect with their audience. However, social media can’t be a crutch. Bands still need to practice their instruments and write good music or their Twitter followers don’t mean anything.

What is your favourite cover song to perform?

AG: I like all the cover songs we play. Mainly because we don’t play them all the time. But right now, my favourite is ‘Psycho Killer’ by the Talking Heads.

AG: Thanks for all the support and for sticking with us. We hope to see you out at a show sometime soon!