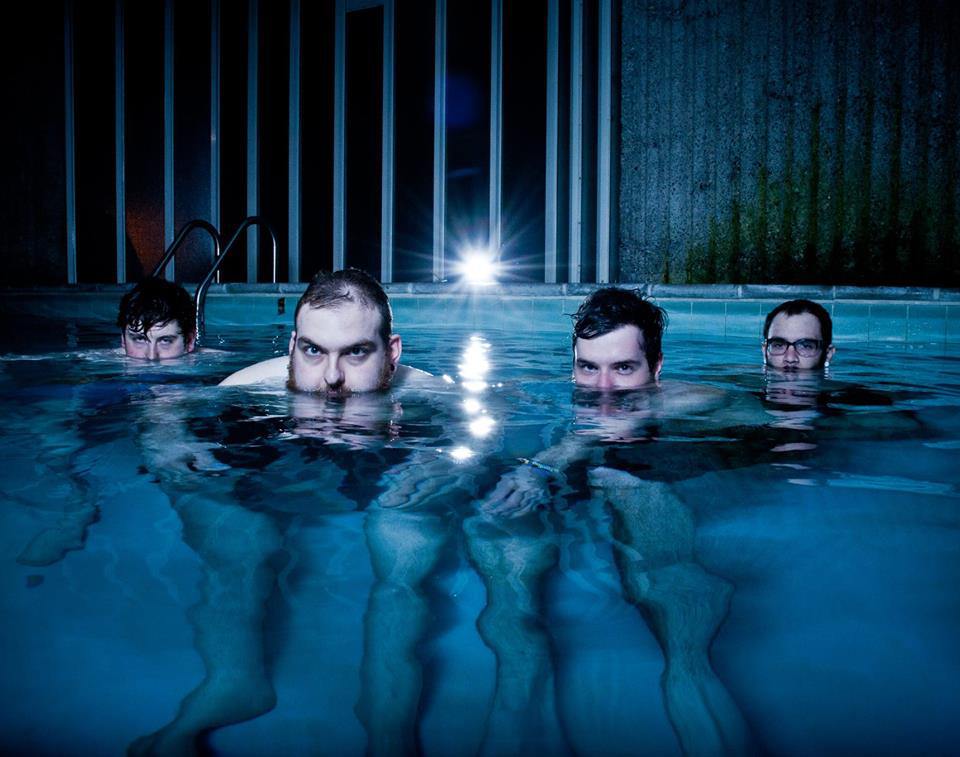 You can see a review I did of their album here:

SS: It’s just something I’ve always wanted to do. When I was a really young kid, I would play air guitar in my room and pretend I was in a band, so there’s just never been any questioning it in my life. I started playing drums when I was ten, had my first band when I was thirteen and just kept at it from there. I know I will be making music for the rest of my life.

How did you choose the name Sharks! On Fire for the band?

SS: We actually had a lot of other (even worse) band names before we picked S!OF. We were initially The Giant Purple Teacups, back when we were more of an indie-style outfit. Not my idea. Then we were Catch The Crook for a short while and then Tickets To Toko for around a year or so. Basically the idea behind Sharks On Fire is this:

You’re swimming in an ocean and it’s a beautiful day. The sun is shining. But suddenly a shark is coming at you! That’s bad news right? Now what if that shark is now ON FIRE? I mean, it’s underwater AND it’s on fire. It’s probably a super.

So.. you’re fucked.  And that’s the meaning.

Who is your main musical influence?

SS: My favorite band when I was in high school was Modest Mouse. I think lyrically, they inspired me a lot. Isaac Brock has a lot of breadth to his lyrics which is something that had an impact on me. I hate music that’s all about being young at ‘da club and having sex… there’s just so much more to life then that.

Also, Say Anything are a great band who I listen to a lot.

SS: It’s hard to say. I know you’re probably looking for a big-band, like The Wonderyears or something but really, I would like to tour with any hard working band who’s been around for a number of years and paid their dues. There’s something to be said about good up-and-coming music in Canada, and that’s the scene I like being in.

With that said, I’m really excited for our upcoming Western Canada tour, because it’s with a bunch of bands I love. We’re touring with Joel Cossette who played in High Hopes and Prom Night In Black And White which were both really great pop-punk bands who did well in our scene. We’re also touring with Liam Glaim’s new project Trace The Sky. You might not know his name, but he used to be in a band called The Perfect Trend who were in our circuit a few years ago. They were touring back when Sharks was just starting up and so there’s a lot of respect there. Liam is probably the most genuine, hard working guy I’ve ever met.

What is your favourite song on the album, “From Birth To Bad Grades (Everyday, The Same Dream)”?

SS: Either The Acts, for saying exactly what I wanted it to say, or Hands, for being such an emotional release for me. I was in a pretty bad place at the time I wrote that.

The song, “You Make Me Touch Your Hands For Stupid Reasons” was one of my favourites on the album, can you tell me more about the background on the song?

SS: Well, I originally wrote it as a solo song for myself. You can hear the original version as a (spoiler alert) secret track on the physical copy of the album.

The whole band had just moved to Vancouver from our home town of Kamloops. I had no money, no job, didn’t know anyone in the city and I had given up a lot of my life in my hometown – including my girlfriend at the time, family and life-long friends. It was like everything I had known in my life had stopped mid sentence, incomplete. I was very depressed. We also moved to a terrible neighbourhood, and my van, the last peice of my old life, just kept breaking down.

I had this sort of desperation in me where I didn’t know what I was going to do or what was going to happen, (we later ended up homeless for a short stint) and one night I just sat down and all these lyrics just poured out of me. Normally I have to refine what I write a whole bunch and spend hours and hours and hours on it, but it just came. So I think it was meant to be. Everything in the song is literal, and is a direct reference to things that happened to me or were said to me, and are all directed at very specific people. So really, it completed the sentence my life stopped halfway though.

In general, where do you pull inspiration from when writing songs?

SS: Real life. I like to think that’s where all honest music comes from.

SS:  Whatever our newest song is! I like writing more than I like playing songs over and over. So a fresh song is a good song to me.

SS: Well, we have this tour coming up that I mentioned earlier. It starts on October 24th. We’re playing Vancouver island, all around BC and Alberta with some really cool bands and I can’t wait. If anyone’s interested in that, there’s a facebook event for the entire tour over here: https://www.facebook.com/events/1415868148635338/

After that, we’ll see. I want to put out another record soon, hopefully with some re-recorded songs from our 2009 release, ‘We Had A Dance-Off In A Thunderstorm’, as well as a new version of our 2010 single ‘Air Combat’.

Now, in true Canadian Beats fashion, we have to include some “fun” questions for your fans to find out something new about you.

SS: Feel free to laugh at me, but it’s totally Billy Talent. My girlfriend remains unimpressed with me whenever I mention that.

Honorable mention also goes out to Gob, who were one of the first bands I loved. If you like punk/pop punk, I highly reccomend checking out anything they recorded before 2004.

SS: Face Down, by Serial Joe. I saw them on Much Music when I was thirteen and I absolutely needed their music for some reason. I own all their albums, including “KICKeD”, which they recorded when they were like twelve. Looking back on them now, they really weren’t very good aside from maybe two songs.

What is your favourite type of candy?

SS: FUZZY PEACHES. GIVE THEM TO ME IN MY MOUTH.

What is one lyric that really speaks to you? (one of yours, or another band, up to you)

SS: My favorite lyric is from the song Bukowski by Modest Mouse:
If God controls the land and disease, and keeps a watchful eye on me, if he’s really so damn mighty, well my problem is that I can’t see, well who’d wanna be? Who’d wanna be such a control freak?

The negative religious aspect aspide, I just think it’s pretty profound and casts the figure of God in a tangible, almost humanistic light.
Or rather, that’s how it hit me when I was fourteen and it stuck with me ever since.

SS: I don’t really follow a lot of TV shows. When I do watch something, it’s something like South Park or Family Guy. I like to fall asleep to mindless, fun things to keep my mind off of troubling subjects. Otherwise I’d probably never sleep.

What would we find you doing in your spare time?

SS: Graphic design over at CapturingMoods.com!

And of course, is there anything you’d like to say to your fans?

SS: It’s important to be a passionate person. Whether that means you love music, art, trains (I love trains) or rocks, make sure you never give that up or it’ll be your biggest regret.

Also, download some free songs by Sharks On Fire over at sharksonfire.ca/downloads. No strings attached, we just love our fans.

Thanks so much for the interview!
S!S!