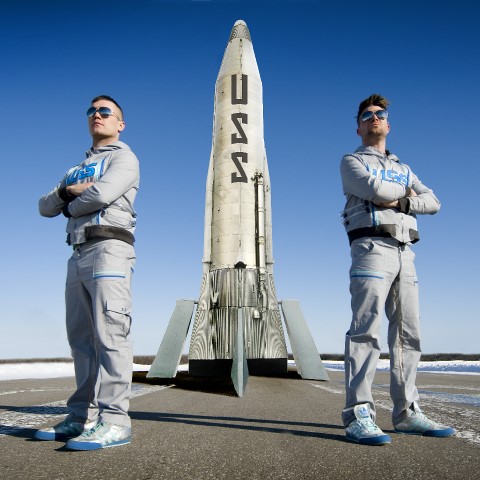 Toronto band, Ubiquitous Synergy Seeker, otherwise known as USS, consists of Ash Boo-Schultz and Human Kebab. They describe their music as “like a campfire after-party with a jungle-rave vibe, progressively two-stepping their way to a dance folk cuddle”. They released their album ‘Approved’ back in 2011 (you can check it out here:https://itunes.apple.com/ca/album/approved/id434403445) and they recently released their single “This Is The Best”, which you can purchase here https://itunes.apple.com/ca/album/this-is-the-best-single/id652363445, along with a lyric video for the song http://www.youtube.com/watch?v=o6LGi2Y9GYk.

So you may be asking yourself how you get to know more about this amazing band. Good question! You can check out their websites:

And, as always, just continue to read this interview.

USS: Djying. Literally standing on a stage and entertaining total strangers. As a band, we have always experienced music through our concertgoers. Making people happy for an hour and a half every night is why we first started playing music.

USS: Melody and lyrics. Ash holds down the fort on these two key preliminary ingredients. Music may or not be available during the initial stages of song composition within the creative context of USS.

USS: For me it’s the sounds and rhythms that will move people on every different level of consumption. To speak for Ash, I feel that he spawns ideas out of experiences as they are happening to him. Lyrically he is in sync with his best and worst of times as a person. This is the true essence of a USS song: living it.

If you could work/tour with any band or artist, alive or dead, who would it be and why?

USS: Carrot Top, Nazareth and The Trews. Dream lineup created by the one and only B.A. Johnston. Impeccable touring package right here.

You have the lyrics, “I’d been feeling so inspired” in the chorus of “This Is The Best”, so, what inspired this song? Why did you make it a single?

USS: Lyrically and melodically this song was crafted over the course of a decade and a half. The depths of hell juxtaposed with the lofty heights of hedonism inspired “This Is The Best”. We made it a single because it took us a day and a half to write and track start to finish with our colleague, producer and co-writer Tawgs Salter standing there saying, “well, here’s the first one”. As a team we were that confident.

Have your fans reacted as you had hoped to “This Is The Best”?

USS: This is by far our most successful song to date. We could not have anticipated the reaction from fans, old and new. They have gone above and beyond to share their wonderful words and thoughts with us. It is truly humbling.

USS: The politics. Politics in radio, politics in touring. I could write a thesis on the politics of music and its effect on independent artists.

USS: It is absolutely 100% the most important tool for any business, let alone musician. Now more than ever, the world wants to watch your every move or at least feel validated. Artists have the opportunity to interact with their fans on their smartphones with the push of a few buttons. These are people who will support your career for the rest of your life if you do good by them with your social media.

USS: Damini. We noticed early on that people react to it with the same conviction that we had in producing and writing it. In a live setting, it is chaos through elephants on a trampoline of willingness.

What comes next for you?

USS: More random shows all over the place. Complete our latest recorded efforts and see the world all throughout 2014.

USS: Every giant single by Phil Collins, courtesy of my father.

USS: Catching up on Twitter for 20 minutes on any given toilet around the world.

USS: The World’s Most Dangerous Places