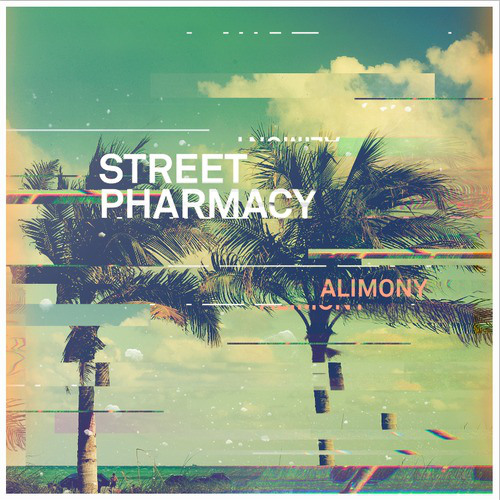 If you follow this blog, more than likely you’ve saw a post or two about Street Pharmacy. They are a reggae/rock band from Welland, Ontario. The band consists of Ryan Guay, Jesse Robitaille & Dan Fretz, with appearances by Brandon “Zeek” Ventresca and Nate Triano.

Street Pharmacy released an EP entitled “Alimony” on September 25, 2012. The EP features six great songs, including their single, “Shepherd’s Pride”. I personally love each song on the EP. I am so glad to have heard about this band. It’s a refreshing change in sound and they have an amazing amount of talent.

I usually pick a favourite song to elaborate on,which is hard for me with “Alimony” since I really do love each song, but I’m still going to talk a bit about two of the songs. The fourth song is called “Twenty One” and there is something about this song that got me hooked since the first time I heard it. With lyrics like “As I grow I notice that we’re winning the fight, we’re still the band that plays the party at your house tonight”. When I asked Ryan what the meaning/ writing process behind this song was, he answered “Twenty-One was a song I wrote when I was Twenty-One years old. The song is about playing in a band and the realty of it for me at that age. There are a few references to the notion of avoiding the standard 9-5 job by following your passion (in my case that is music). It’s a melancholic song in the sense that its about doubting yourself and your ability to rise above the mediocrity that is so prevalent in our society. At Twenty One I felt as if there was already a lot of pressure as a university student to complete my degree, get a job, wife, house and have children and if I didn’t do that, I was living wrong. Really, all I have ever wanted to do is make music for a living and that was just something a lot of people around me couldn’t understand. Music has been my life and will always be my life. I also mentioned that playing in a band is difficult as well due to what is sometimes a fundamental difference in views on why one plays in a band. The people around me at the time couldn’t see the big picture and that I was dead serious in doing this for the rest of my life no matter who was around me playing instruments or otherwise.” Ryan then added about the lyric “Holden, this is much more than a phase” referring to the protagonist in the J.D. Salinger novel “The Catcher in the Rye”. I think at that age, I felt a lot like Holden Caulfield so the song is in many ways a letter to him explaining that I feel the same pressures to conform but just can’t bring myself to ignore my passion.”

The next song I want to talk a little bit about is the title track, “Alimony” which is the catchiest song on the EP. I must say the beat is so infectious that the first few times that I heard it, I didn’t even pay attention to the lyrics, and for me, that’s a big thing. I am a big fan of lyrics, especially lyrics that tell stories. After listening a few times, I paid more attention to the lyrics and I got a kick out of this song. The song hits on the troubles of Alimony and Prenups in a comical way with lyrics such as “She says she’s gonna leave if she does not get one, driving me insane yea she finds all this fun…all these silly girls are the same” followed by the catchy “She don’t need no ring, yea she don’t need no ring”.

All in all, I would highly recommend this song to anyone. A great mixture of upbeat, fun songs. Keep an eye out for more from Street Pharmacy.