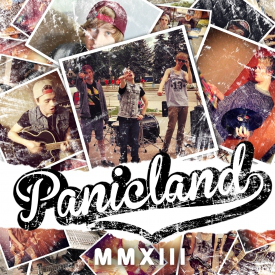 Panicland is a pop band from East Kidonan in Winnipeg, Manitoba. The band consists of Braedon Horbacio (Vocals/ Guitar), Ian Willmer (Bass), and Kyle Fox (Drums).
Panicland has had success in local contests, including TJ’s Gifts, which attracted the attention of Glen Willows of BCM Managment and producer Greig Nori, who has agreed to record their first full length album.

They have recently releasesd a mixtape, MMXIII and it is available to download for free at http://www.audiomack.com/album/panicland/mmxiii

I just listened to it a few times, and I have nothing but good things to say. The mixtape features three songs. The first being “Rock Ur Body” which is a fun, upbeat song that anyone would love to sing along to. It is probably my favourite.

Next is “Hover”, and once again it’s a perfect song to sing along to. The band says that they have a pretty diverse palette when it comes to what they listen to, from Elvis to The Beach Boys to Lil Wayne to Kenny Rogers. You can tell they pull from all different genres when you listen to their songs. It’s nice to see a band that is influenced by so many different types of music.

The final song is “Lockets”, which is their single. They have released a lyric video for the song. http://www.youtube.com/watch?v=DpUIVW4wo5o I can see why they chose this song as their single. It seems a bit more like mainstream music than the other two. I’m not saying that’s a good thing or a bad thing, all three songs are great. I for one, cannot wait to hear more from these guys.