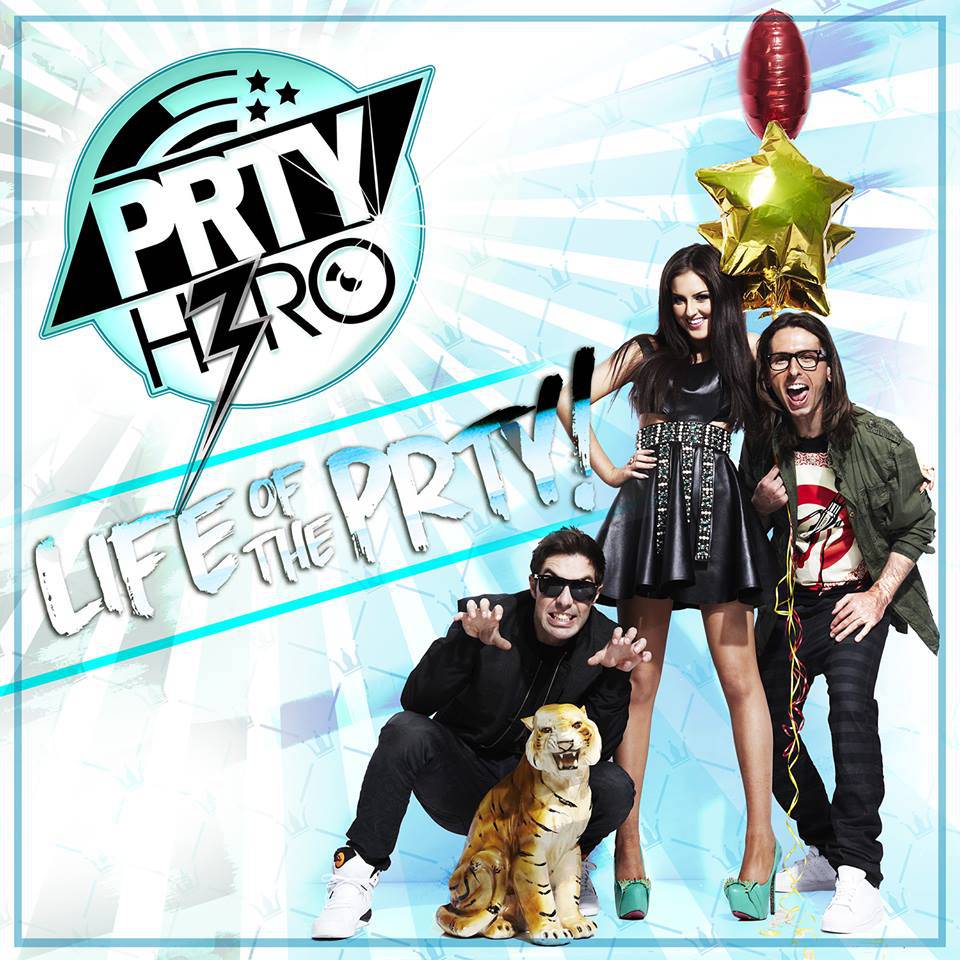 Prty H3ro is a hip-hop, dance trio formed and based in Toronto, Ontario, although all members are originally from Vancouver, BC. The band consists of Natasha Zimbaro (Vocals), Dizzy Overhill (Rapper), and Mark Luongo (Musical Mastermind).

The group’s debut single, Life Of The Prty, is being released via Sony Music Canada on July 8, 2013. It’s a great, upbeat party song that you are going to love.

You can purchase the single on iTunes HERE:

Keep reading to find out more about the band, as I had the opportunity to interview Dizzy!

I love the name Prty H3ro, how did you come up with it?

Dizzy: Well we originally had PRTY which was cool but we needed something to represent all of us since we are 3 different people. The “E” which we made a 3 represents the three of us, PRTY because we like to have a good time, and H3RO just meaning an individual who leads and doesn’t follow! We sat down with our managers at Coalition Music and discussed it and “PRTY H3RO” was born!

How did you guys meet each other?

Dizzy: Mark and I have been working together in various ways for about 10 years! Crazy I know! And we met Natasha through a mutual friend back home in Vancouver. It would be cooler if we met on another planet or something, right?

Life of the PRTY is a great song, full of energy, how did the writing process on this song go?

Dizzy: Mark and I actually had most of the song written about 2 years ago but it wasn’t until we got into the studio this year together as a group that it came to life! Our producer Jeff Dalziel made it the crazy A.D.D joyride you hear today and the three of us are really happy with it! For sure! It bangs!

What is it like knowing that your song is playing on radio stations across Canada?

Dizzy: Wow! I guess it’s like a dream come true! I’m glad the country is supporting it and all we can say is thank you! It’s still really weird hearing yourself on something you’ve listened to your whole life and heard all of your idols on…it’s surreal!

It looks like making the video for “Life of PRTY” was a lot of fun, what was your favorite part of shooting the video?

Dizzy: I think the cottage was pretty fun for all of us because it’s hard to explain how beautiful northern Ontario is until you’ve seen it! I think the whole experience was amazing because it was our first video together and it was just an overall cool experience! What’s even stranger than hearing yourself on radio though is seeing yourself on TV!

Throughout  the video I see glimpses of one of the greatest Nintendo consoles (In my opinion) Super Nintendo, so of course, I have to ask what’s your favorite Super Nintendo game?

Dizzy: Well personally, F-Zero or Super Mario!!!!! Awwww yeeeah!!! But Mario Kart is in the console in the video, which is also a pretty sick game!

All this talk of parties, what is your one “must have” at a party?

If someone has not heard of Prty H3ro, how would you explain your sound in one word?

Dizzy:  FUN! I feel like people take music too serious sometimes.. It’s supposed to be fun, connect people, and make them move! I love any and all music and I always will.

Dizzy: The PRTY coming to a city near you!!!!

Who would you love to tour with in the future?

Dizzy: There are so many sick people….in Canada probably DWW, Hedley, and Marianas Trench, but I’m down for whatever, honestly! We all just love performing so anywhere at anytime!

Is there anyone you would like to collaborate with?

Dizzy: Hoodie Allen or Drake would be pretty dope on a personal level but again there are so many artists that would be amazing to work with. I think this producer from the GTA name CIRKUT would be pretty sick for all of us, as well as DR. LUKE or Will.i.am.. That would be rad.

Canadian Beats is all about Canadian music, so who is your favorite Canadian band/ artist?

Dizzy: Hmm… I’d say Drake is high on that list because I respect what he’s done coming from Toronto. It’s inspiring and humbling.

Thank you for your time, is there anything you’d like to say to your fans?

Dizzy: Yes! To all the #PRTYANIMALS out there THANK YOU for all your support we could not do anything without you. Everyone who has requested our song and has bought our song on iTunes: THANK YOU!! We do this for you and I will remember each and every one of you J MUCH LOVE !!!