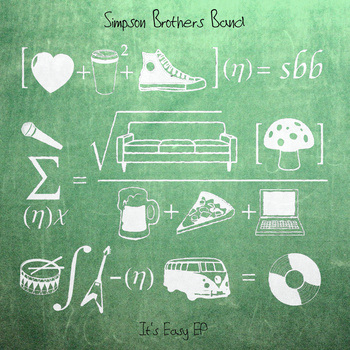 The Simpson Brothers Band is a pop/ rock band from Vancouver, BC. The band is fronted by twin brothers, Rich & Rob Simpson, and accompanied by Chartwell Kerr, Tyson McIlroy and Adam Pristas.

The brothers appeared on CBC television program, “Cover Me Canada”. Afterwards they added the 3 other bandmates to create a combination that would have immediate success as winners of the Shore 104.3’s “Best of BC” prize in June 2012.

The Simpson Brothers Band released their EP, “It’s Easy” on August 20th, 2013. The EP was produced by 604 Records rapper, Anami Vice and Kevvy Mental from Fake Shark Real Zombie. It also features Anami Vice on one track, a remix of the title track, “It’s Easy”. The EP is a perfect selection of great songs by an immesely talented band.

My favourites are” Diamonds”, and the very catchy title track, “It’s Easy”. Both of these songs start with a inticing beat and once the vocals started, I was hooked. Both of these songs are in opinion, destined to be hits. The rest of the songs are just as good. “Losing My Cool”, “Be Successful” and “Atmosphere” all carry the same upbeat music along with the smooth vocals.

I would highly recommend this EP to anyone. I think it would appeal to fans of many genres.