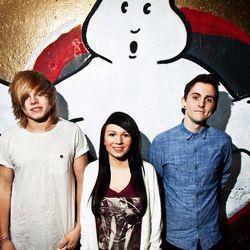 The Maddigans are Trisha Watson, vocals, Seb Sanders, guitar, and Benn Kimmis, drums. They’re a pop punk band from Edmonton, Alberta. I had a chance to ask Benn a few questions while they were on a Canadian tour with Lions Lions.

Although you originate from Edmonton, in the past year or so, you’ve spent a lot of time touring throughout Europe. How is touring in Europe different from touring in Canada?

Benn: It’s different a few ways. The first thing that comes to mind is that the drives are much shorter in Europe, which is definitely nice! Trisha really has to think about whats she’s going to say on stage when we’re there. Normally you can kind of wing what you’re gonna say but when you’re in a country where not many people speak English you have to find a way to talk to them and maybe learn a few words in their native language. Also we get tons of food and beer every night in Europe!

You recently released a music video for Miles Ahead, which was also your very first music video, what made you choose that song? What was it like filming?

Benn: We had a hard time picking what song we wanted to do but in the end Miles Ahead seemed the strongest. It was really fun to film! It was all taken within about 15 minutes of our guitarist Seb’s house in Cheltenham, England. The coolest part was climbing up this massive hill/cliff that we got some of the shots on. The hike nearly destroyed us but the view from the top was crazy!

You’re currently on tour with Lions Lions who recently toured with Sleeping With Sirens. What other bands/artists would you like to play a show/tour with?

Benn: We’d love to do some shows with Cartel. Such an underrated band.

Are there any bands/artists you’d like to collaborate with?
Benn: Not in particular but we’re always open to the idea!

Since you are on the road a lot, what bands/artist are on your road trip playlist?

Benn: We listen to some of everything on tour but mostly Pop Punk and Rock music. Last tour in the van there was a lot of Story So Far, The Dangerous Summer and Futures.

We like to include a little this or that section in the interviews so here we go.
Coca Cola or Pepsi?

Benn:  I try to drink pop no more than once or twice a year so neither.

Benn: Facebook’s good for keeping in touch. Twitter is good for easily connecting with fans.

Benn:  Night for sure! I hate mornings with a passion.

Big thanks to Benn for taking the time to do this for us. Be sure to check out The Maddigans on Facebook http://www.facebook.com/TheMaddigans