Interview – We Are Monroe 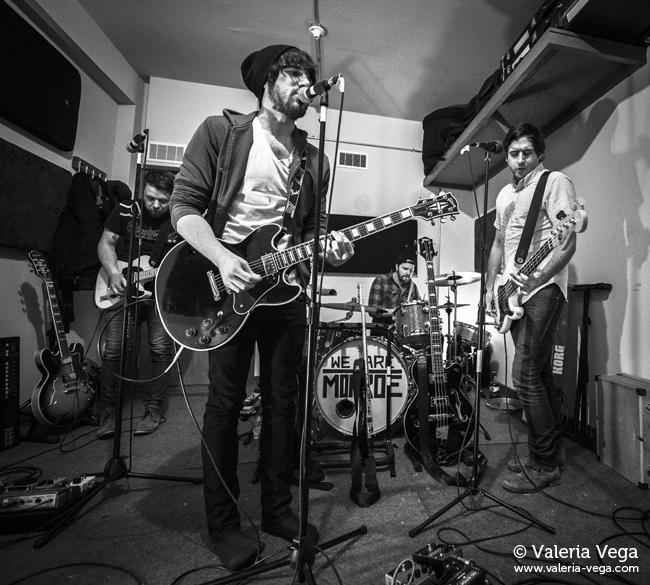 We Are Monroe is a post-punk / rock band from Montreal.

You may remember that I did a review of their self titled EP, if you missed it, you can see it here:

Now I have been given the chance to ask the band a few questions.

How did you pick the name “We are Monroe”?

WAM:  When we first started playing together, Pat wasn’t in the band yet, we had a different name. Eventually, when Pat joined us, we felt we had to change it up. We originally chose Monroe, simply because of Marilyn Monroe, and how symbolic she was and still is. We decided to add the “We Are” more on this idea that even though we’re four guys in the band, we ‘re a unit, we’re one. And, the “We Are” is also more of reflection that we’re all apart of something; whether it’s something in the community, a band, a sports team, or even something as basic as a group of friends… wherever there’s that spirit of the collective, that’s what the “We Are” is about.

When did you first realize you wanted to pursue music?

Pete (bass): The first time I picked up the guitar. I was a young kid. I didn’t know how to play, but I knew I loved it. That’s why I still play music, because I love playing, and coming up with new ideas.

Ben (drums): I had a friend in elementary school who got a guitar as a gift one year, but he didn’t really like it and he didn’t play much with it. When I would go over to his house, I would play with that guitar. Eventually, when I made my way to the drums, I knew I wanted to write and perform.

Pat  (vocals): The notion of wanting to pursue music came later for me. I was 19 or 20, and I was learning a bunch of cover songs. That’s when I knew that I wanted more, and that I wanted to write my own music.

Jason (guitar): I have been playing guitar since I was 10 or 11, and starting performing in high school at variety shows, coffee shops, and parties. But, it was when I moved to Montreal that it happened. I was 18 and I started playing in garage bands. One of the first bands I was in booked an opening slot at this proper venue, Café Campus, in Montreal. Once I played on that stage everything changed.

When I reviewed the EP, I really enjoyed “Modern Day Gentlemen”, can you explain the meaning behind the song?

WAM: Thanks! It’s really about a certain category of guys in our society. The kind that is self-centered, too busy and focused on trying to be successful in different aspects of their lives, that they end up treating everything around them, including women, like shit. And within that, men are more frequently tagged as whores. In fact, the title of the song is meant to be ironic. And, when you listen to the song, the verses are the point of view of one of these guys, and the chorus is from a woman’s point of view.

Ben: This song called Funeral. It’s a newer song, it’s not off the EP but it has an energy, and it picks up momentum as the song goes on. From the EP, Give Me Some… I especially like it when we put further in the set, when we’re warmed up and in the zone. The tone of it is exciting.

Pat: A song from the EP, Modern Day Gentlemen. The vibe of it is fun and I’m happy of how the vocals came out for me. It’s also one of the rare songs that I don’t play guitar, so I usually end up dancing a bit.

Jason: One of the newer songs we’ve been playing live. It doesn’t have a proper title yet, but we’ve been calling it Sunglasses. It’s a laid back song, but has these cool moments, and a little guitar solo for me. From the EP, I really like playing Tear Yourself Apart. Whenever we play it, it gets really crazy at the end.

What can we look forward to from you guys in the future?

WAM: Things are always moving forward. We’re working with some friends on really developing our online presence. We understand that using social media is a vital part in the success of a young band these days. We also want to start posting homemade live videos on YouTube. Doing as much press as possible is also a big ticket for us. More important than all that though is the music: Writing/recording/releasing music more often. And, of course, playing shows and spreading the word as far and loud as possible.

WAM: Collectively, Joy Division is the keystone influence. And it’s not just about the sound. It’s about the frantic energy, the restlessness, and sometimes a bit of the darkness.

Pete: I like a lot of different types of music, and discovering new music, but my influences in terms of my bass playing in the band, The Killers and Joy Division are the main ones.

Ben: In the band, and just in general, Nirvana is one of my main influences. They were one of the first (and few) bands that really got me excited about playing drums. It was an integral part of their identity, and their sound was raw.

Pat: The Strokes. Simple and complex all at one. They’re chord progressions and vocal melodies are always interesting.

If you could tour with anyone, who would you choose?

Pete: If ever The Bravery came back, that would be cool.

Ben: If we were in a different time, Joy Division.

Jason:  Kings of Leon. They tour at an incredible level, all over the world.

What is your favorite cover song to perform?

WAM: We don’t often play covers. In fact, this year we haven’t been playing any. Last year we would sneak a Joy Division cover into the set. Disorder, Transmission, or Shadowplay were the songs we would choose from.  A lot of it has to do with the type of show we’re playing, how much of it is about promoting ourselves, and our set length. Maybe we’ll start putting a cover back in… any requests?

Now for some fun, what is the first album you remember buying?

Pete: From The Muddy Banks of the Wishkah, from Nirvana

What is your favorite summertime activity?

WAM: It’s safe to say that we all have the same answer, and it involves alcohol and a park, or a beach.

If you were stuck on an island and only had one item with you, what would you hope it was?

Pete- I need a soundtrack. Plans, from Death Cab for Cutie.

Ben – A volleyball… to play.

WAM: To the people who are following and supporting us already, thank you. We’re not very far along into this adventure, so it’s nice to have people gravitate towards us this early on. To those who don’t know us yet, check out our EP, check us out live, request us on your local stations, write to us, it’s all appreciated. Above all though, we want to let folks know that we feel like we’re just getting started. We’re continuously writing new songs, and looking to meet new people and make new fans, and really have fun whenever/wherever we play shows. Lastly, while we’re going to stay busy over the summer, there’s going to be lots and lots happening this fall. Stay tuned!

Share this:
Related Items
← Previous Story Interview – Kiss of the King
Next Story → Interview – The Maddigans