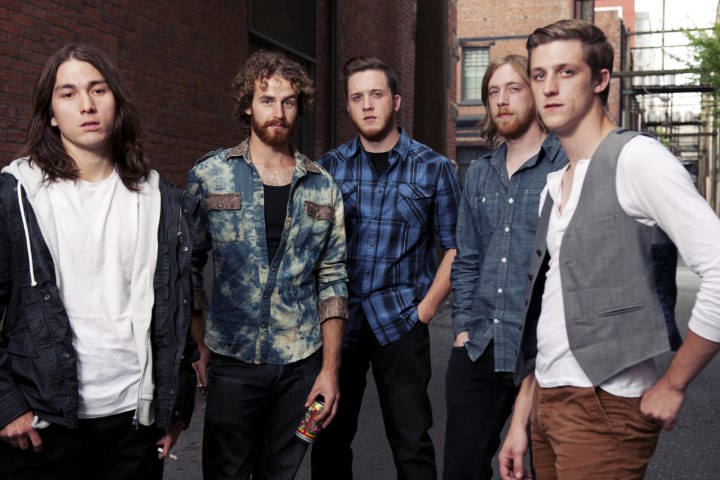 Pigeon Park is a rock band from Vancouver, BC. The band features Nick Weber on Vocals, Logan Pacholok on Guitar/ Vocals, Kevin Okabe on Guitar, Artur Lepert on Bass and Hunter Ellliot on Drums.

The band was formed as long time friends who grew increasingly inspired by one another’s musicianship. Pigeon Park’s legacy extends far beyond their 2008 inception. They were all friends and jamming since childhood.

Their debut album, The Sun, as well as two cross-Canada tours served to amplify their creatvity and gained support for the band. Their new EP is due out today, August 6, 2013, Black Widow was produced by Jordan Oorebeek. Black Widow finds Pigeon Park honing that inspiration into a more direct, unified bout of power.

If you want to know more, I’m going to tell you a few ways, first follow the band on twitter: @pigeonpark and Like them on facebook: https://www.facebook.com/pigeonpark And of course, read this interview I did with Nick Weber and Kevin Okabe!

First off, how did you come up with the name, Pigeon Park?

NW: It was a momentary decision that ended up absorbing meaning for all
of us. It became a representation of a certain avenue of life; it helps
an important part of our city’s history to be preserved. It felt right
at the time and it still does today.

Can you explain the difference in sound between your debut album and
your upcoming EP?

NW: Our debut record “The Sun” was an interesting time for all of us.
We were all going through changes and really taking a step forward as
being a legitimate group. We went through changes then and had the
opportunity to experiment with the self-titled EP before putting Black
Widow together. I feel the changes now are equally as important and this
time around, the sound is a little meaner and focused.

K.O – The musical direction of the band has somewhat shifted to a more
clear and focused sound. It’s a little heavier, a little more
aggressive. I think we’ve been finding ourselves for the past five years
and just over the last little while we’ve truly found out who we are and
exactly what the Pigeon Park sound is.

I read that you have been jamming together since childhood, when did
you realize that you wanted to pursue music as a career?

NW: I feel like after we played our first few shows together, it became
something that was an awesome way to blow off steam. It eventually
developed into an addiction and started to become apparent that we had
something people wanted to hear.

What is the first cover song you guys performed together?

K.O – Little Wing – Jimi Hendrix, that was the go to song when we first
started playing together.

NW: I think it was Start Me Up by The Rolling Stones

Who has been your biggest musical influences along the way?

NW: Its changes daily…back in the beginning it was Zeppelin for sure.
I like the Chili’s, Monster Truck, Jack White

K.O – Jimi Hendrix is my biggest influence not only as a guitar player
but also just the man that he was, his passion, and devotion to music is
incredible. He picked up a lot of life dirt (something that every blues
guitarist needs) he starved his way to success, and kept pushing no
matter what. That’s incredibly inspiring to me as a musician.

From what I’ve heard, I love Black Widow, what is your favorite song
off of the upcoming EP?

NW: It’s definitely one of my favorite four…haha it’s hard, I like
them all for different reasons.

If you could choose any band/ artist to tour with, who would you
choose?

NW: Right now I’d like to tour with Sloan or Monster Truck… maybe The
Tragically Hip

K.O – I would have to say Dead Sara or Monster Truck currently, those
two bands are killin it and moving rock n roll into a really positive
direction.

How important do you think Social Media is in the music industry these
days?

PP: It’s important but for the wrong reasons. It’s a way to promote
your group and keep people informed but I think it gets to be a little
much sometimes. Go outside for shits sake!

K.O – Hugely… I mean look around when you’re on the bus, walking down
the street, etc. Majority of people have their heads buried in their
phones completely engulfed in digital life and social media and whatever
else, like it or not this is the direction the world is heading in so
yes, its hugely important to keep people engaged with social media now
more than ever.

Last but not least, do you have anything you’d like to say to your
current and future fans?

NW: Chin up girls and boys…it only gets better from here 😉