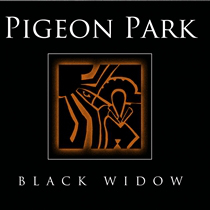 Vancouver rock band, Pigeon Park is releasing their EP entitled Black Widow tomorrow, August 6, 2013. Black Widow is produced by Jordan Oorebeek. The EP features 4 songs, and each of them show off the strong vocals of Nick Weber (Lead Vocals). The band plays perfectly together, probably because they are long time friends, which gives them that extra connection. Logan Paholok (Vocals & Guitar), Kevin Okabe (Guitar), Artur Lepert (Bass) and Hunter Elliot (Drums) and Nick Weber all went to school together, dsicovered bands and jammed together, it was only a matter of time until they eventually formed an amazing band.

Though the first single/ video from the EP, “Come Down Slow” portrays a homeless girls life, and is full of emotion and energy, I would have to say that my favourite from the EP is the title track, “Black Widow”. The song starts off with a whistling beat, and from then on, I was hooked. This song showcases the musicianship of the band, everything goes together in just the way it should. The vocals are once again strong and full of power.

This band would put on an amazing live show and I hope to someday have the oppurtunity to see them! And you should too! Until then, be sure to keep an out eye for them, I’m sure you’ll see them everywhere soon enough!