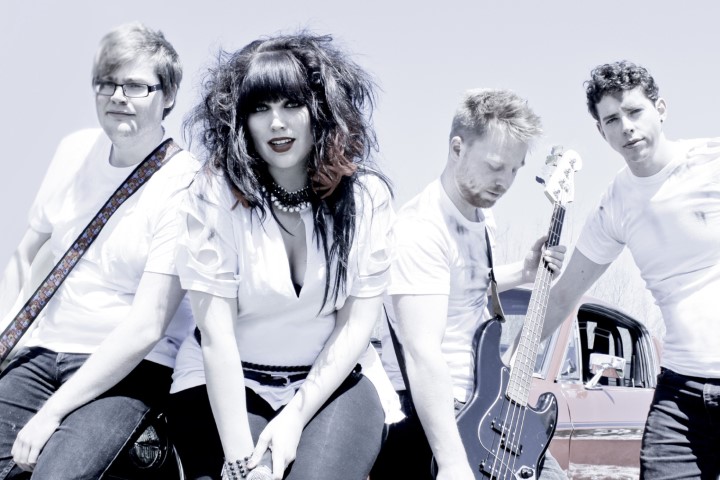 Jenavive is a Canadian Indie Rock band from Calgary that formed in 2010. The group features Jenavive Smith on lead vocals /keyboard, Brett Elliot on Bass, Reggie Smith on Guitar and Anthony Speelman on Drums.

Jenavive is proud to be a part of Calgary, Alberta’s independant music and arts scene. Jenavive Smith was chosen as a Calgary Cultural Ambassador for 2012, part of Calgary 2012, an independant non-profit organziation that showcases Calgary’s Culture and legacy.

Jenavive releases her debut album, “Under The Sheets” in August 2011 in Toronto and November 2011 in Calgary. Jenavive released their first EP, Spades in February and is set to release the second, Hearts in the summer.

I have been given the chance to ask Jenavive a few questions via an email interview.

When did you decide that you wanted to pursue music?

JS: I’ve been playing piano my whole life and have been pursuing music in some form or another forever. It took a while to get the courage to start singing. It’s something I always wanted to do but was too shy at first. Now I’ve been singing and writing for almost five years.

Who has been your biggest musical influence over the years?

JS: It’s probably a big mishmash of various musicians. Growing up I played a lot of classical music. Some of my favourites were Beethoven and Chopin. I still really enjoy playing Bach on the piano. I sneak a little in at shows sometimes as an intro to one of my own songs.

Your first EP, Spades was released in February; can you explaining what inspires you to write songs?

JS: My dad always said, “Write what you know”. My songs are always about personal experiences or exploring an idea like the first single on Spades, Human Nature.

What is your favorite song to perform live?

JS: I really love performing Thug Boy. It has a lot of emotion and a really personal story that I get to share with the audience.

Most bands/ artists perform cover songs at some point in their career, what is your favorite cover song to perform?

JS: Anything by Muse. In another life I would be in a Muse tribute band.

Up until now in your career, what was been the highlight?

JS: The guys and I just wrapped up a cross-Canada tour. That was pretty rad. Our last show was at the Horseshoe Tavern in Toronto.

Social Media has become a big part of the music industry, what is your opinion on how important it has become for artists?

JS: I think it has completely changed how artists and fans interact. You now have direct contact with your fans and you need to engage with them. It blurs the lines between personal and public life a little. Personally I love interacting with my fans online and a few of them have become very good friends. It’s definitely really important for new artists to make their fans feel included in what they’re doing.

If you were only given one word to describe your music, what word would you use?

JS: The Offspring. Which my mom promptly made me return.

If you were given the opportunity to tour with anyone, who would you want it to be?

JS: Metric. We’d be a great opener for them.

I’d like to include a small “What’s your favorite?” section, so here goes:

JS: Settler’s of Catan or any puzzle app on my phone.

Now last but not least, is there anything you’d like to say to your fans?

JS: How do you get a guitarist off your doorstep? Pay him for the pizza.