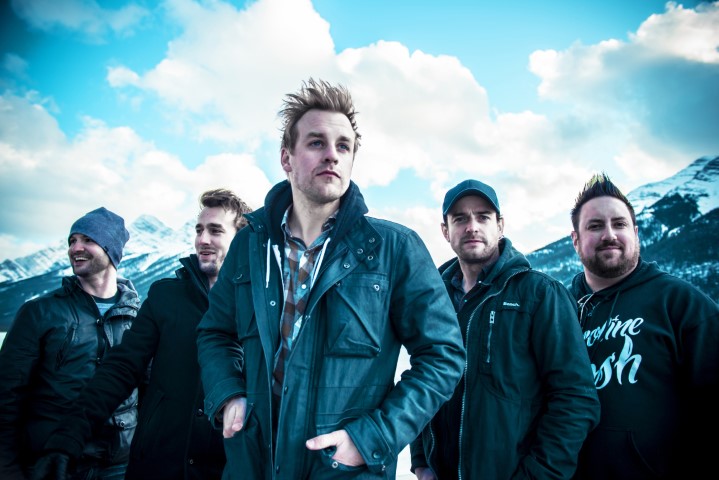 Tupelo Honey is a rock band from Alberta. The band was formed in 2004 and has had numerous videos on Much Music and MTV, as well as songs on TV shows, such as CTV’s Degrassi.

In 2011 the band released their first full-length album, which debuted at #4 on the Canadian iTunes rock charts.

Tupelo Honey has toured with some of the biggest bands in Canada, such as Theory of a Deadman, Metric, Hedley and the Trews, just to name a few. I had the pleasure of seeing them live once when they were on tour with Faber Drive. I really enjoyed the show.  Hope to see them live again another day!

I’ve been given the oppurtunity to ask the band a few questions, so here goes!

How did you come up with the name, Tupelo Honey?

TH: Its kind of a strange story actually… When we were first a band we were in a contest and had to pick a name. Our old singer’s dad’s favorite song was Tupelo Honey by Van Morrison and wanted to give it a shot. So I figured “yea… whatever… we’ll change it tomorrow…” BUT we were seen by a promoter who ended up booking us to play Stage 13 in Camrose for 5000 people. After playing that show we started getting a lot of fans and kind of got stuck with the name!

How did you guys meet/ form the band?

TH: I met most of the guys at Music College. Steve, Tyler and myself (Dan) were all attending Grant MacEwan music college in Edmonton and really hit it off. Steve and Greg had played together in other projects. From there we all ended up playing in a crappy folk band as hired guns. After one boring gig we all hung out at Greg’s place, had some beers and decided it was time to start an amazing rock band! We then found a singer through some mutual friends and the rest was history!

Who would you say is your biggest influence?

TH: Musically I would say our band gets a lot from the big rock stars of the 90s. We seem to get classified in the same world as Audioslave, Foo Fighters, and Velvet Revolver. The new sound of the band is definitely very ‘stadium rock’ we have some pretty huge soaring songs that are almost reminiscent of a heavy U2 or something.

What is the first memory you have of performing music?

TH: Personally I think it was at my Gr 9 talent show. I had a band called Good 4 Nothing. We sucked but had a blast! It was a NOFX influenced punk band.

What is the first cover you remember playing?

TH: Well I grew up learning covers to help learn the guitar but the first cover I remember playing live was in Tupelo Honey. We played ‘Show Me How To Live’ by Audioslave!

You have toured with some great bands, who would you like to tour with in the future?

TH: I would LOVE to see some of those bands again on the road. Marianas Trench was one of the most fun bands to tour with. I loved playing stadiums with Bon Jovi; I think I could handle doing that again too. I would say a great band for Tupelo Honey to tour with in the future would be the Foo Fighters, 30 Seconds To Mars, or The Black Keys

Where has been your favorite place to perform so far?

TH: It’s hard to beat playing in the rink that you grew up watching hockey in, Id have to say Rexall Place. As far as places I’ve never been, Id love to tour Germany.

What can we expect from you guys next?

TH: We are just about to release our first single off the next record “Halo” on iTunes. It just went to radio last week. From there we have an AMAZING music video coming out at the end of the month. We shot the video with Michael Maxxis (Billy Talent, Sum 41, Alexisonfire…) . Then in mid August we are releasing a new record!

Do you find social media important in the music industry these days?

TH: It’s basically the only thing that matters. Radio stations are just reaching in the dark, labels are too afraid to take chances, and promoters are not really promoting these days. Fans are all that matter. The plan for Tupelo Honey this year is to keep pumping out content nonstop!!

If we found you on a “day off” what would you be doing?

TH: Laundry! We have a good time together on the road just chatting, having beers or a coffee and trying to visit old friends in every town.

If you could give advice to someone just starting out in music, what would you say?

TH: Don’t do it to get rich. Do it because you love it. Work hard, have fun, and NEVER worry about what anyone else is doing.

Now I’d like to do a quick, THIS OR THAT.

Sleep in or get up early?

Thank you for your time, do you have anything you’d like to say to your fans?

TH: No thank YOU!!  Definitely. Our fans have been so amazing to us, we went through a pretty serious line up change a few years back and everyone held in there with us. We have an amazing bunch of supporters. We are going to do our best to give you guys something to really dig your teeth into this year. The best Tupelo to date should be coming out this summer…. Keep your eyes peeled!!!! Make sure to like us on FB, follow us on Twitter and subscribe to us on YouTube!!