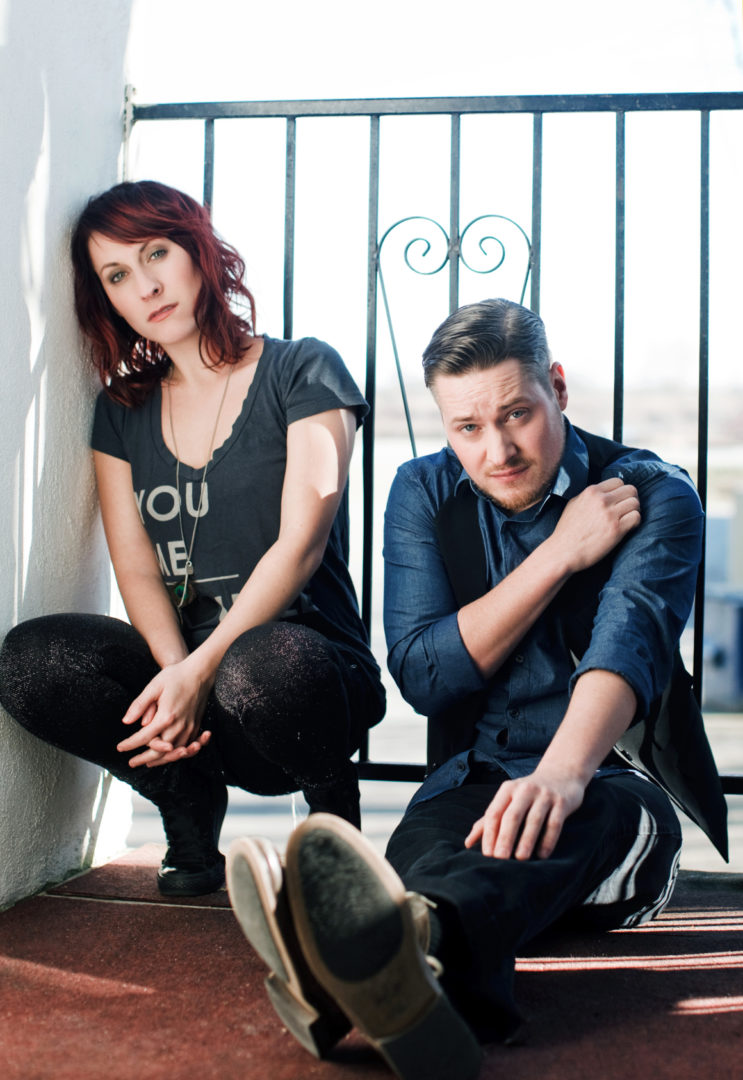 Small Town Pistols is a Canadian country music duo composed of Amanda and Tyler Wilkinson, formerly of The Wilkinsons. In between these two projects, Amanda Wilkinson released an impressive solo album in 2007, but she wasn’t satisfied. She called up her brother, Tyler and asked him to write with her, and it just felt right. So they took off writing for their new project.

In February of 2013, they released their self titled debut album by 604 Records. The album features hit singles “Living on the Outside” and “Blame it on the radio”.

I’ve been fortunate enough to get in touch with them for a virtual interview.

First off, how has your sound changed, in your opinion, between The Wilkinsons and Small Town Pistols?

STP: It has matured a lot. There are certain lyrical ideas that suit where we are in life now that we could have really said or would have not suited The Wilkinsons. There is also a much rougher edge to Small Town Pistols overall sound

How did you come up with the name Small Town Pistols?

STP: We came up with a bunch of names but Small Town Pistols just seemed to fit perfectly. We were raised in a small town of like 14, 000 people. Everyone knew everyone and it was pretty tight community. The “PISTOL” side of things is because of our great grandma Ida. She was the most amazing , outspoken, sometimes irreverent women we have ever known. People who knew her always said that she was a Pistol. So growing up a lot of people compared us to grandma because we were always a little outspoken and off the wall HAHA

STP: Its amazing to work with family, there is a weird twin like thing that goes on with Amanda and I that makes singing together feel super natural and we always know what each other are going to do. We also tend to have zero filter with one another. That’s sometimes bad but for the most part it’s great because especially in the creative process we tend to get the best result at the end of the day that way. What you see is what you get with us!;)

Your album is full of great songs. I especially like “Friends” and “Walk Tall”. Can you explain your song writing process? What inspires you when writing a song?

STP: Trying to match a great melody with honest and heartfelt lyrics or at least make an attempt to say something interesting is how we approach writing. We try not to settle on easy lyrics or lines. There is most definitely something gratifying about working hard and making sure it sounds right.

What is your favorite song to perform on the album?

STP: Living on the Outside has some powerful movements in it so that is a favourite for sure.

Who would you like to work with in the future?

Up until now in your career, where has been your favorite place to tour?

STP: Canadian Audiences are amazing and bring such warmth and energy to your shows… I love performing in Canada and not just because its home. But the USA and Australia are close seconds!!!

Who has been your musical influence throughout your lives?

STP: Our dad. 100%. If it wasn’t for him we wouldn’t have had the love for music and songwriting like we do.

STP: Not sure which one but I remember it was George Straight (Tyler)  It was a Patsy Cline cassette tape. I think I warped it I played it that much (Amanda)

What could we find you doing in your spare time?

STP: Reading or video games (Tyler) painting. With wine preferably;) it’s relaxing. I can shut my brain off a bit( Amanda)

How important do you find Social Media is in today’s music industry?

STP: its huge !!! careers are made because of social media…. ONE TWEET FROM JUSTIN BEIBER CAN CHANGE SOMEONES CAREER…. its nuts

I had a fan ask me to ask this question to you guys, so here goes:
@Lea_and_Heather asked Is it hard to go home now that your names are so well known? Do people you grew up with treat you differently?
STP: I love coming home its not hard at all. I think the people who make a big fuss about what we do for a job maybe don’t realize that we are the same people we have always been….. we just get to do something we love for a career. In spite of the occasional person being fussy about us. The overwhelming majority are down home and insanely supportive.

It’s still the one place where I don’t really have to put on makeup. I can where my Browning camo hat and kick it. And everyone’s cool with it (Amanda)

Thank you for your time, is there anything you’d like to say to your fans?
STP: WE LOVE YOU GUYS SOOOOOOOOO DAMN MUCH  and can not wait for you guys to come see us live !!!!