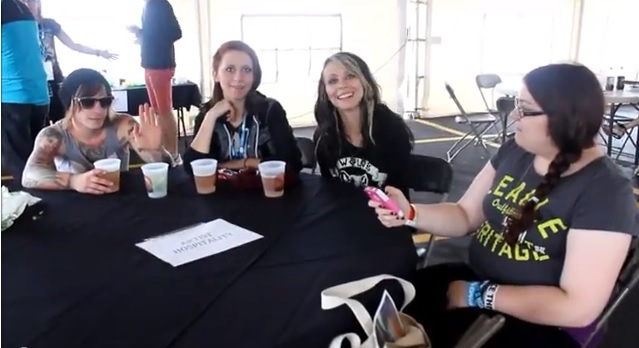 Due to the environment where I had interviewed Courage My Love at the Big Red Music Festival, there was too much background noise in the video to understand what the band’s answers were to my questions. Because of this, I have written out the questions and answers below

You guys have been touring for your new EP, ‘Becoming’, how has the fans reaction to it been?

Mercedes: The fan reaction has been awesome so far, like uh, yeah, we didn’t know how it was going to be when it first came out, um, because it’s a bit different from our first EP, but yeah, it’s been amazing, and it’s literally only been out for maybe two weeks, um and that’s how long the tour’s been so far and it’s been fabulous. Like, uh, they’re singing the words with us, which is great and, uh, I see all these like people quoting our lyrics all the time and so yeah it makes me feel really good.

Has the reaction been what you expected at all?

Mercedes: We didn’t know what to expect! Like, uh I was hoping to get a good reaction, obviously, so yeah, we’re definitely, uh, definitely happy.

Phoenix: I think we all have different ones.

Phoenix: Um, I like playing Skin and Bone, I think that’s probably like all of our favourites, but I also like playing Kansas, those are my two.

If you were in charge of a weekend festival, like Big Red, who would be on the lineup?

Mercedes: This line up is pretty great, uh, I don’t know. We all really love Pierce The Veil and Sleeping With Sirens, and bands like that, so probably any of those bands we would be really stoked to play with.

And that kind of leads into the next question, if you could tour with any band or artist, who would it be?

Mercedes: There’s so many people we would love to tour with, but we could all list like one of our favourite bands. I really want to tour with like a sweet band like, I don’t know, Every Time I Die, or something like that. That would be my dream.

What is the first concert you remember going to?

Brandon: Dirt by Alice in Chains

Mercedes: Yeah AFI or Linkin Park or something.

What can your fans expect next from you?

Mercedes: Well, we’re doing a lot of touring this year with the new EP and um yeah we want to basically just travel as much as we can and put some music videos out soon. We’re playing some sweet summer festivals and then we’re going on tour in September, October and November, so it’s going to be a busy year for sure.

The next part of the video was quite clear, so we decided to include this snippet.