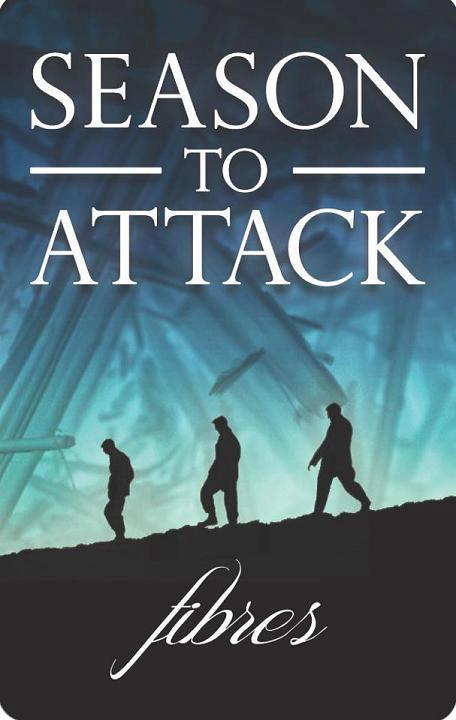 Season to Attack is a Vancouver-based edgy pop/hard rock band that was solidified in the summer of 2011. Season To Attack played it’s opening show to a sold out crowd, at the same time releasing a three song EP entitled “Threads”. Singer David Isbister and Guitarist Alan Calimbas (formerly of Mass Undergoe) initialized the effort to start the band with local drumming powerhouse Brian Badd (Unlabeled, Irreverents). The rest is very recent history.

In 2012, STA began working on their newest EP, “Fibres”. The EP featured production from Doug Naugler (Mass Undergoe, Kyprios, Rebel Spell) and achieved a higher standard of production, more representative of STA’s dynamic sound. The EP was well received, especially the bold sex anthem “Just Le Me” and the infectious and driving “How to Burn One Night”.

From the success of “Fibres” and with some funds to reinvest, STA went back into the studio with Doug Naugler to re-record “You Aren’t Worth This Song,” and “Unrequited.” This is set for release in July 2013.

STA embraces digital media and knows how important it is in the music industry, therefore interacting with followers is a top priority for the band. Be sure to visit them on these sites:

I’ve been given the chance to do a virtual interview with the band, so I hope you’re ready to learn more!

First of all, where did you come up with the name, Season To Attack?

STA: David: We were really trying to come up with something that was a reference to the force and drive needed to mount a campaign to really seize an opportunity. For a bunch of separate reasons, we felt this was very important to us to convey. We began to sort of play off of a theme of combat, but in a more personal sense, as in the war that rages inside of one’s self and around them, and in their environment. Alan and I began to toss around variations of the name “Attack Season-” as a euphemism for ‘the time to strike.’ So after some tinkering, we arrived at Alan’s version- Season to Attack, and realized it’s directness and also its potential for some ambiguity was a great fit for us. I nicely sums up our artistic direction and the way we feel about going about a project.

I love the titles of your EPs- Threads, and Fibres. What is the meaning behind the names?

David: The first EP, “Threads” was titled as such because I felt the three songs we chose were essentially each a separate distillation of our main sounds. “You Aren’t Even Worth This Song,” was the sort of song we wanted to model our pop sound on, “Unrequited” was this soulful, very visceral song about personal failure, and was a more somber tune. “Finish Hymn” was from that frenetic, driving place of heavier music that we also come from, but they were definitely fragmented and meant to sound like three distinct threads. In this case, threads was a wordplay that could also mean the subject titles of a message board that let you know what the forum contains. Or it could also mean tightly wound sinews that create a strong and tight little rope :D.
Since “Fibres” was a bit more of a cohesive effort, I made the observation that it was like we allowed the thread to unwind a bit to its blended core of ‘Fibres.’ So in an artistic sense, “Fibres” was more about the unwinding of threads to examine different elements and create a bit more flow and direction.

How has your sound changed between the two EP’s?

STA: We haven’t thought about it a ton, other than to play what is moving us. “Fibres” was definitely well rehearsed, thought out, and we had those songs for some time, so maybe if anything- we feel as though Fibres represents some more finality and purposeful attempts to really hone in on what we are looking for. But once we find it, it is the musician’s curse to try and find a new angle or sound to finesse. Music is really awesome and a total assface in so many ways, haha! We love that the sound changes from song to song, but we don’t really evaluate how until after we have completed it and are ready to record or give it more scrutiny in pre-production.

STA: If only a couple of people there and those people are our moms who are pretending to like us, we still have a great time playing anything that they are seeming to be into. I (David) personally really enjoy the feeling of triumph I get after singing “Unrequited” because of what that song means to me personally. During the song it is desperate, pleading, and morose with only a hint of hope. But even getting through playing it is a relief, because it validates what it is about. Alan loves “You Aren’t Even Worth This Song” and “Just Let Me” because he LOVES the pop/dirty RnB stuff we do- that is mostly his input. Brian loves to play “How To Burn One Night” because it’s an awesome feeling to him. He loves the “badass middle and end parts, and how it pumps up the crowd!” Honestly though, anything. We love that people even show up and are as into it as they are. WE LOVE YOU!

Who would your first choice to tour with be?

Alan: Foo Fighters
David: System of a Down, Muse, or Justin Timberlake
Brian: Acres of Lions because they have toured Canada countless times and we could learn a lot from those guys, plus they are rad dudes!

Who would you say is your main musical influence?

STA: We unfortunately can’t pin one down for you. All of us have been moved in so many ways by so many genres, bands, and performers it’s so tough. Just speaking for me (david) my influences run the gamut from 50’s/60’s motown and roots/folk, through glam, punk, metal, pop, industrial, and even classic country. We have always avoided this question because we don’t have a “totem” band- we want to just play what is good to us and natural, and aspire to have that music stand the test of time. We have been lucky to be inspired and urged on by other unique and awesome local bands in the Vancouver and Island scene- guys like Ninjaspy, Bullets Over Beauty, The Body Politic, Destineak- but more because they have forged out a direction that is really interesting and we have had the chance to play shows together and really see the end result of their process.

Which band member would you say is the most social (on twitter and/or facebook)? How important do you find Social Media to be in the music industry?

STA: Alan t:@alancalimbas and Brian Badd t:@BrianBadd are both quite active. Alan for sure knows the most and is most on top of that. David t:@davidisbister is more sporadic on twitter, but responds to every shout out and often uses it as a way to connect with people to dish out some jokes and a bit of activism or advice if asked as well. Our live second guitarist Greg Withers t:@GreyBeck is also a photographer and is all over instagram and twitter!

Think back, what is the first concert you ever attended?

David: The Beach Boys at Deer Lake when I was 8. Still one of the best things ever!
Alan: Alanis Morrissette and Our Lady Peace, 1995
Brian: my first arena show I ever saw was RHCP/Foo Fighters at GM Place in 2000

well, we like 12 midnight to say, 5am. That’s actually MorNight.

BOTH, rubbed onto our bum-bums. (scientific word)

Thank you for this opportunity, but before we end this, is there anything you’d like to say to your fans?

STA: We are indebted to you for giving us a listen and sticking by us. With your help, we continue to build a cool story and continue to have amazing interactions, face to face meetings, and a world of (alarmingly in bad taste) inside jokes that we can’t get enough of. Playing music to make others feel anything is more than enough to make us happy. Thank You very much for giving us the opportunity to say that, ands of course, thanks to everyone out there who continues to make us strive for more with their support. Don’t ever be afraid to say hey to us, we look forward to hearing from you.  😀