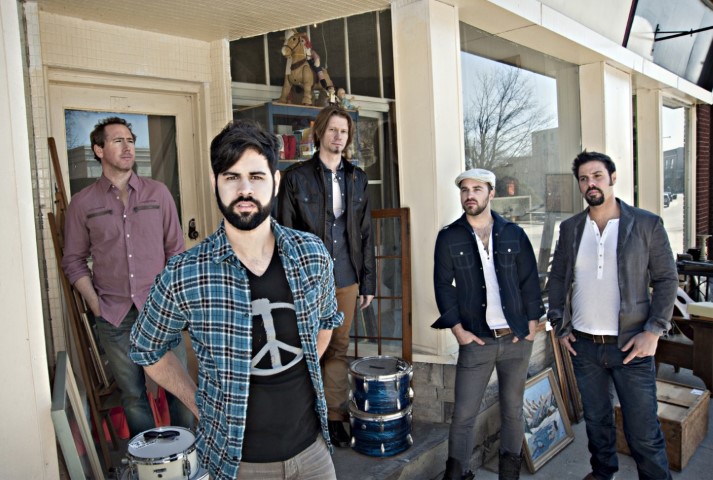 The bands debut album “Open Letter” is set to me released tomorrow (June 25) under 604 records.  Keep an eye out for more from this Canadian rock band, because I’m sure you’ll be hearing more.

You can see them on tour on these upcoming dates:

June 28 Kingston, On. The Mansion

I am happy to say that I have been given the opportunity to ask the band a few questions, hope you’re ready for this!

How did you come up with the name, Autumns Cannon?

AC: We came up with Autumns Cannon because Autumn was the time our band had officially formed. We chose the word cannon because we feel like rock music has explosiveness to it.

AC:  Shaun Francisco (singer/guitarist) had decided to move from his hometown of Maple Ridge, BC shortly after his mother had passed away from ovarian cancer. Upon his arrival in Ottawa, he got a job working at a local music shop. In hopes to find a new band and a revival from the hardships of his family’s loss, he decided to ask around about drummers. Shaun had heard from others around the shop that another guy who worked there by the name of Mike was a solid drummer. At the time, Shaun had shown some songs to Mike he had been working on. Mike said he would be in to playing together and that he knew of a guitar player also looking for a band. That’s where Nick comes into the picture. Then Nick knew a guy named Marty through a studio they were working at together. Once Marty had heard the songs, he then asked to join the band. We needed a keys player and didn’t think another guitar could hurt. From that point we just needed a bass player. Shaun had heard of a guy named Mark through another musician in town who thought Mark would be into the music. Shaun later went down to an Ottawa bar to meet Mark during a gig the bassist was playing at with another band. At that time Shaun decided to mention his ideas of Mark joining the band. Turns out we all liked the music and would decide to come together.

What is the first song you remember performing together?

AC: Lonely Streets, one of the tracks off of our album titled Open Letter, is the first track we played together. After running the song a few times, we all looked at each other with smiles from ear to ear, we knew we were on to something special.

I have been fortunate enough to hear the album and I must say that it is a great mix of songs, which song has the most meaning behind it for you?

I really like “Tossed In A Tear”, can you explain the meaning and writing process behind this song?

AC: We really wanted a song that could swing while portraying the emotions of what it feels like to be tossed around through adversity. It touches on a trialed romance and the feeling of not having control over the outcome of our daily lives. It also tells a story about what kind of lengths we would go through to see us come out of the wreckage of these situations.

I see you will be opening for many bands this summer. Some of which include The Tragically Hip, Sloan and Big Wreck. Who would you love to tour with in the future?

AC: There is a long list of bands that we’d love to tour with, basically any good old fashioned rock and roll band! We are huge fans of the Hip, Matt Mays, Ryan Adams, Sam Roberts, Big Wreck, and the list goes on.

AC:  Any of the great songwriters like Tom Petty, Metallica, Nirvana, and Bruce Springsteen.

If you only had one chance to convince someone to listen to your music, which song would you present them with and how would you sell yourself?

AC: The song we would present would be Shake It Off because it makes you want to play air guitar and forget about where you have to be and what you have to do. There’s no other way to sell yourself then to be yourself. We make an effort to share our music in a way that is honest and sincere, and that it will impact all our fans positively.

How important do you think Social media is in the music industry these days?

AC: Social media is one of the easiest and most important ways for us to engage with our fans. It’s great to interact with fans pretty much around the clock no matter where we are

If you could only bring one item on tour with you, what would it be? (Other than your music equipment)

AC: A smart phone because of its capability to bail us out of any situation. That is of course until the battery dies, but we have five of them in our band so we’ll be alright.

If you were on any reality show, which would you choose?

AC: The Amazing Race. All of us are very competitive and want to win when it comes to things like this. We could see it playing out like this. We would get halfway through the race before we realize that we should stick to playing rock n roll. Those kind of shows end up creating a lot of animosity between teammates, and we plan on sticking around together for a long time.

If you aren’t working on your music, what could we find you doing?

AC: We tend to watch a lot of hockey, and if hockey isn’t on, we’ll be playing hockey (either outdoor rinks or PS3).

Thank you for your time, is there anything you want to say to your fans?

AC: One thing we would like to say to our fans is thank you for your support in us. Some bands might think that they reach the top on their own because they’re the ones who write the songs and play the instruments. But it goes without saying you can’t forget that it takes fans to make a choice on who they want to listen to. So whenever we find out we have a new fan, we’re so thankful that they made a choice to support us. We believe you’re only as good as the people who support you. Without them, none of this is possible.