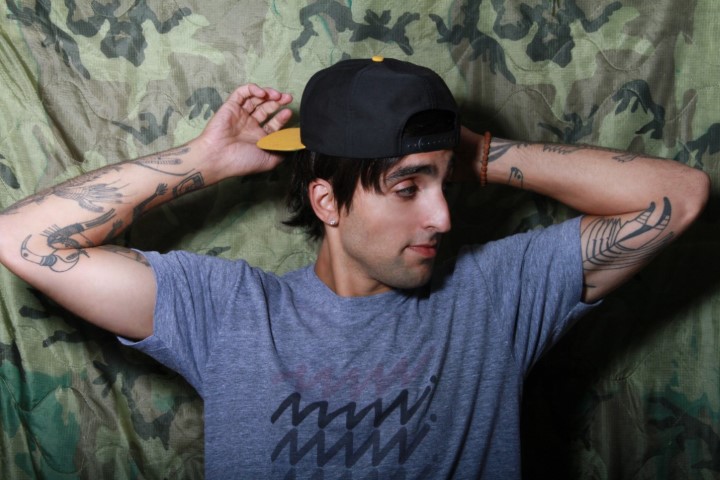 Hailing from Vancouver, BC, Anami Vice is a hip hop artist recently signed under 604 Records. His songs will get stuck in your head (pun intended) and have you humming along in no time. Recently off of two cross Canada tours with Down With Webster and Marianas Trench, Anami is back in the studio working on his next mix tape with Curtis Monumental.

The latest album he has out under 604 Records, Are You Serious, is available on iTunes at https://itunes.apple.com/ca/album/are-you-serious/id566700337, or if you wanted a physical copy, you could order it from the 604 Records website http://www.604records.com/store/products/240. He also has free music (OMG, I know right?!) available on his website http://anamivice.tumblr.com/freemusic .

Have I convinced you to listen to him yet? Want to learn more about Anami Vice, the rapper with the incredibly cute and fluffy dog? Well you’re in luck because I was lucky enough to have the opportunity interview Anami via email.

You were recently on tour with Marianas Trench and Down With Webster on the Face The Music and Face The Music: With A Vengeance tours. How was it performing to thousands of screaming fans each night?

AV: Strange in the beginning. I felt like a fraud the first few times! Then it became something I really looked forward to. AND THEN nights off were kind of a bummer because I just wanna be out there playing.

We have all heard of the pranks between Marianas Trench and Down With Webster. On either Face The Music, or Face The Music: With A Vengeance, did anyone ever prank you?

AV: Yeah, I got pranked, it was pretty tame though. I had it pretty easy. Maybe they were scared that I might freak out! But then, all the other pranks were pretty tame too. For instance, stealing DWW light suits and going on stage with them for a song, that actually turned out to be fun for everybody. And the crowd loved it. I think everybody liked each other too much on that tour and just weren’t interested in making each others lives that hard.

AV: Believe me, I have my beef(s) with the corporate side of the industry. As well, I like many new artists get frustrated with the cumbersome process of breaking into mainstream media. However, we all know about that stuff!! If I could change one thing about the music industry, I would decree that lip syncing no longer be allowed. I’m not gonna name names but I think it’s ridiculous that an artist can get away with not singing his or her songs on a sold out world tour… it just doesn’t make any sense to me. But maybe that’s just me.

If you were able to collaborate with anyone you wanted, who would it be and why?

AV: Kanye. The guy is a mad-genius. And there is nobody else in hiphop who has been able to evolve with the times like he has. It seems like most hip hop artists either become irrelevant (or just plain sound dated) OR have staying power because their style is somewhat timeless. Kanye has the ability to recognize what’s going to be the next big thing, align himself with that movement and the emerging artists associated with it, AND then make it seem as if he spearheaded the whole thing.

Who came up with the name, “The New Future” for your band? Does it have a specific meaning?

AV: “New Future” is what I named my first album. When I got a band together for live performances, we just decided to name the band after the album we were playing. It seemed fitting at the time. We’ve come up with all sorts of fun alternative names that we use in private but the those are not for public consumption! 🙂

Out of all the music videos that you have made, which one is your favourite?

AV: If you’re asking which of MY videos is my favourite, I would have to say “Bye For Now”. But if you are asking which of ALL the music video I’ve made is my fav, including those I’ve done for other bands, it would be “Diamonds” by the Simpson Brother’s Band. These videos are my favourites for the same reason: super low budget so it forced us to be extra creative, a crap-load of fun to make and that they are just plain old fashion feel good vids.

You¹ve directed your own videos in the past, as well as Fake Shark Real Zombie¹s video for “Girls”. Do you prefer being the one in the videos and having someone else direct you, or would you rather be the director?

AV: Its easier to concentrate on your performance if you are not dealing with all the stuff that a director has to deal with. That being said, I do like to maintain some control over how I’m being photographed so that I’m portrayed the way I’d like to be. It’s a toss up.

I’ve noticed on twitter that you interact with fans a lot, be it responding to them or following them back if they draw you fan art. What would it have meant to you if you had the same opportunity when you were their age?

AV: I’m on twitter a lot because I enjoy talking to fans and it is of course, a great way to promote my music. However, I was always the sort of kid to shy away from talking to/meeting/engaging with artists/musicians. I never stood in line to meet someone and I never waited out back get somebody’s autograph. I was a bit of a snob. Maybe I thought it just wouldn’t be “cool” to show how much I like someone or something. I probably would not have been the twitter type. Too bad though, I probably missed out on some cool experiences.

AV: Its important because it’s the standard way of doing business these days. 5 years ago and beyond, putting posters up if you were doing a concert in town, was standard practice. If a band didn’t put posters up, a lot of people wouldn’t know about the show. So, bands put posters up. I think its the same with social media, if you are not doing it, you can’t expect people to be aware of your product.

You have free music on your blog, as well as your album, Are You Serious, for sale. What made you decide to make the mix tape you¹re making free rather than selling it?

AV: For the past five years every emerging and subsequently relevant hiphop artist has been doing free mixtapes. In fact, the term mixtape indicates its being free. If it’s not free, its an album. I’m just being as prolific as possible AND doing mixtapes is simply, par for the course.

And, just because I¹m curious, why did you name your dog Chewy?

AV: I had the name picked out before I even found him. I just liked it. And only when I finally met him, did I realized how perfect it was.

I also asked some of your fans if they had any questions for you:

Morgan asked: What is your favourite childhood memory?

AV: One of favourite memories is from grade one. It was track season and they made all the grade ones race to see who was the fastest. As it turned out it was me. I figured out two things that day. One, I was fast. And two, I was really really… really competitive.

Danielle asked: What is the first song you remember listening to?

AV: My parents would play a lot of jazz and classical when I was growing up. I don’t remember which one’s I heard first but when I hear a song like “Take Five” by Brubek or some Beethoven or something, those tunes (if I can call them that) always bring back really early memories.

Jeannette asked: Who is your biggest musical inspiration?

Brooklyn asked: What made you want to pursue music?

AV: I realized I didn’t want to do anything else.

Heather asked: Do you plan on going on any tours soon?

AV: Nothing specific yet but OF COURSE! 🙂 The only thing I love as much as making music, is performing in front of people.

Emma asked: Where has your favourite place to perform a show been?

AV: Playing my hometown in venues where I’ve seen all the artists that I’ve looked up to over the years.

Daisy asked: What is the funniest thing that happened to you on FTM or FTM:WAV?